Where are the nation’s worst drivers? This data may hold the answer 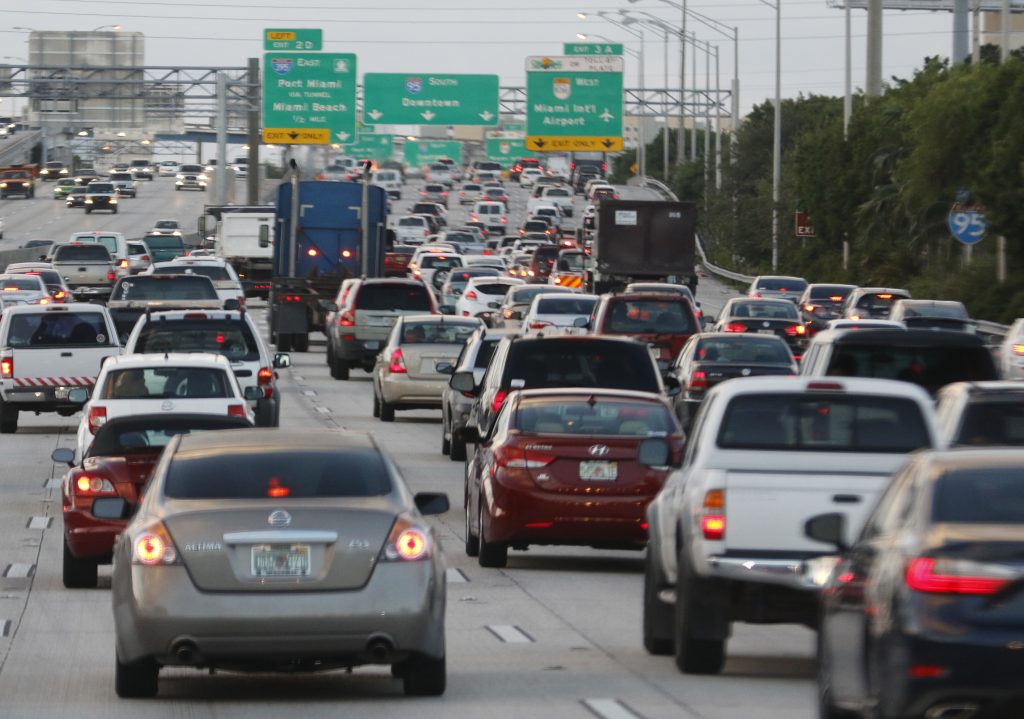 Rush hour traffic is shown on I-95 in Miami, Florida. Photo by Joe Skipper/Reuters

Midwesterners are the safest drivers, while Northeasterners speed the most and Southern drivers are most likely to use cellphones while driving.

Or so new results from a mobile application carried by drivers on their smartphones over millions of miles between April 2016 and March 2017 suggest.

The differences in regional and even state-by-state driving habits cast new light on recent statistics that show the most dramatic two-year increase in road-related fatalities in decades, and add fuel to the debate over the effect state laws and enforcement play in making travel on streets and highways less dangerous.

Everquote, an online insurance marketplace, drew its conclusions on regional driving habits from information gathered during 2.7 million car trips over 230 million miles by users of its Everdrive app, for customers who want to gauge and improve their safety habits. The app uses smartphone components to detect speeding, as well as signs of distraction such as phone use and sudden stops, turns and acceleration, said CEO Seth Birnbaum.

Birnbaum said he suspects Everdrive users are safer than average, because downloading the app shows an interest in safe driving habits. That even those people speed on 36 percent of their trips and use phones on 38 percent of them is a sign that “we have even further to go as a nation in addressing these issues than we thought,” he said.

Almost everyone breaks the rules sometimes, even when they know an app is recording what they do. But some do it more than others.

Mississippi drivers use their phones, either for talking or texting, on almost half their trips. Drivers from Rhode Island, Connecticut, Hawaii and New Hampshire break the speed limit by 10 mph or more on more than half their trips. California and New Jersey drivers stop short the most, and also do the most risky accelerating. West Virginia and North Carolina drivers make the most abrupt turns.

Some of the differences may be explained by state laws. Few Southern states, for example, have blanket laws that ban the use of cellphones while driving, according to an assessment of state laws this month by the National Conference of State Legislatures. Lower speed limits in the Northeast may make it easier to get caught speeding.

In its March report on a projected record 11 percent increase in pedestrian fatalities for 2016, the Governors Highway Safety Association pointed to an increase in driving after the recession, as well as more distractions from growing cellphone use by drivers and pedestrians, as the likely causes.

Unsafe driving habits, such as talking on the phone, speeding and abrupt changes in direction, vary by state. States with drivers who tend to rank higher in recording tend to be lighter in color. Click on a state for details.

Local driving habits and even engineering can make a difference in safety, some traffic analysts say. States that developed after World War II are more dangerous to pedestrians because roads were often built for the convenience of drivers, said Peter Norton, a technology historian at the University of Virginia.

“Florida is a state built around driving … pedestrians are unexpected intruders from an alien planet,” Peter Norton says.

That could help explain why Florida has a high rate of pedestrian fatalities. Florida drivers also seem to be a talkative bunch when behind the wheel, which can be distracting. They rank second on Everquote’s list of states with the largest proportion of drivers using phones while driving. Florida also has a high share of elderly drivers — 22 percent are 65 and over, second only to West Virginia, according to national figures.

“Florida is a state built around driving, which means pedestrians are unexpected intruders from an alien planet,” Norton said. “In places where roads are older than cars — especially the Northeast and the Midwest — driving hasn’t taken over to the same degree. You expect people on sidewalks and crossings more, and walkers have better and safer conditions.”

Beyond Florida and Mississippi, drivers in the Southern states of Alabama, Georgia, Louisiana, South Carolina and Tennessee also use their phones more on the road than do drivers in other parts of the nation — on 41 to 44 percent of their trips, according to the Everquote data.

Like cities in Florida, many in the South are surrounded by suburban sprawl. And Norton said long commutes from the exurbs can tend to force people to do more in their cars.

“When you design worlds around driving, where you can’t do anything without driving, you’re implicitly telling people that they have to do everything in the car — eat, groom themselves, cancel appointments,” he said.

The Midwest may appear to be a safer place to be on the road because populations there are older, which means they may be more experienced drivers and less likely to be cellphone-dependent, Norton said.

And in big, wide-open spaces where speed limits are high and drivers few and far between, there appears to be less speeding. Montana drivers, for instance, had the lowest rates for speeding at 17 percent, followed by Alaska and North Dakota at 20 percent. Montana and North Dakota drivers also had the lowest rates for abruptly braking and speeding up.

Do Laws Make a Difference?

Hard braking — one sign of distracted driving — is highest in California and New Jersey, two states known for traffic-clogged roads. There, drivers displayed hard braking in about two out of five trips. Yet abrupt turns — another possible sign of inattention — were most common in rural West Virginia (26 percent) and North Carolina (20 percent).

West Virginia banned all use of hand-held cellphones while driving in 2012, and the state credited a drop in fatalities in subsequent years to it. North Carolina, however, has no blanket ban.

There are indications that increased regulation may play a role in diminishing some bad driving habits.

Vermont had the lowest rate of cellphone use on the road at 27 percent. Dick Mazza, Democratic chairman of the state Senate’s transportation committee, said that’s no accident. The state banned all hand-held cellphone use while driving in 2014, and has since extended it to cars stopped at lights. It’s also increased fines for using phones in roadwork zones.

“We even put police officers up on snow plows so they can look down and see who’s got phones on their laps out of view,” Mazza said. “It got to be a very serious problem in our small state, and we’re putting a big emphasis on it.” Still, fatalities are up in the state as nearly everywhere else, albeit slightly.

In contrast, state police in Mississippi have complained that anti-texting laws in their state lack teeth. The state has no ban on talking on the phone while driving, except for school bus drivers.

Kansas, one of several states that launched a crackdown on speeding in late 2016, had the largest drop in speeding rates, down from 27 to 23 percent of trips from 2017 to 2016, according to Everquote’s findings. But Everquote also warns that its 2016 data may not be comparable to the newest data because fewer people were using the app then.

Not everyone agrees that distraction from new technology is to blame for the recent spike in road-related deaths. Russ Rader, spokesman for the industry-funded Insurance Institute for Highway Safety, said other factors are more likely to blame.

“Other things are happening that make driving riskier,” Rader said. “Teens, the riskiest drivers, are coming back into the driving force, and many states are raising speed limits. Study after study shows that increased speeds make crashes more likely, and the crashes that happen are more severe.”

The biggest regional factor, Rader said, is that rural roads are deadlier because they’re often two lanes and have high speed limits.

The auto group AAA says there is a “do as I say, not as I do” culture among many drivers when it comes to risky behavior.

A survey from AAA released in February said most drivers see texting on the road as completely unacceptable, and support laws against the practice. Yet, a third admitted to typing a text or email while driving in the last month. Similarly, many drivers admit to speeding although they consider it unacceptable.

One in three respondents told AAA they use cellphones regularly when behind the wheel, and almost half said they had exceeded the speed limit by more than 10 mph in the last month.

The Governors Highway Safety Association said through its communications director Kara Macek that states need more regulation and policing for all unsafe behavior.

This story was produced by Stateline, an initiative of The Pew Charitable Trusts. You can view the original report on its website.?