Tips for raising well-rounded girls in a princess dominated world

Tutus, tiaras, princess dresses and storybooks selling “happily ever after” line the children’s aisles at every major retailer. The “Frozen” soundtrack from the latest Disney fantasy starring two sister princesses, has topped the charts for nearly three months. The Little Mermaid, Sleeping Beauty, Belle and Snow White are bound to come calling at your door on Halloween. The princess culture — fueled by Disney’s multi-billion dollar stake in it — has a tight grip on mainstream girlhood and it’s not going away.

Parents may wonder how all of this will affect their daughters as they navigate the tricky path through to their teens and even beyond. Will they become fixated on looking perfect? Will they have unrealistic expectations for what it means to be a woman? Or is it all just a phase, leaving little long-term effects on their child’s self-image?

Peggy Orenstein, author of “Cinderella Ate My Daughter: Dispatches from the Frontlines of the New Girlie-Girl Culture,” has written for several years about these questions and navigating the princess culture. She will be on the PBS NewsHour Tuesday and she’s shared some tips for parents of both girlie-girls and non-girlie-girls on how to approach the princess culture while raising healthy, confident daughters. — NewsHour reporter/producer Sarah McHaney 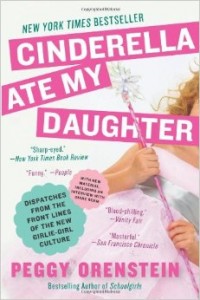 Peggy Orenstein: You will never convince your daughter that you are giving her more choices about how to be a girl by saying no to everything. So while it’s important to limit your daughter’s exposure to the princess culture, you must also find things you can say yes to: books, toys, clothing, activities that will broaden her idea of what it means to be female — and, ideally, unhook it from an obsession with appearance. Obviously, science, music, art and being outside are important. But to directly disrupt the princess industrial complex try some of the ideas below:

Peggy Orenstein is the author of The New York Times best-sellers “Cinderella Ate My Daughter: Dispatches from the Front Lines of the New Girlie-Girl Culture” and “Waiting for Daisy.” She is a contributing writer for The New York Times Magazine. Her commentaries have also appeared on NPR.

Watch Gwen Ifill discuss the the influence of modern marketers and media on girls with author Peggy Orenstein and Angelica Perez of the Ella Institute.

Left: The princess culture can be overwhelming to parents who worry about raising their girls to become strong and confident women. Illustrations by Getty Images

Peggy Orenstein is the author of The New York Times best-sellers “Cinderella Ate My Daughter: Dispatches from the Front Lines of the New Girlie-Girl Culture” and “Waiting for Daisy.” She is a contributing writer for The New York Times Magazine. Her commentaries have also appeared on NPR.

Why measuring plastic waste is the first step toward managing it