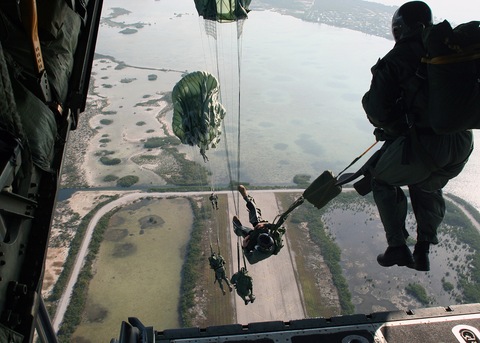 The names of the elite Navy SEALs who took down the world’s most-wanted terrorist remain a secret, but the historic mission is drawing plenty of attention to the military’s special operations units. We asked the NewsHour’s editors, producers and reporters for their recommendations on some good resources about the Navy SEALs, their intense training methods, and their role in the killing of Osama bin Laden:

Navy SEAL Raid on Bin Laden Compound Reflects Tradition of Grit, Secrecy
Bloomberg News by Viola Gienger and Douglas Waller
“The U.S. military’s Special Operations Command, which includes the SEALs, has more than tripled its budget and quadrupled the number of operatives deployed overseas since the Sept. 11, 2001, terrorist attacks.

Who Shot bin Laden? Former SEALs Fill In the Blanks
Washington Post by Manuel Roig-Franzia
“He is the unknown shooter. The nameless, faceless triggerman who put a bullet in the head of the world’s most notorious terrorist…A trio of former Navy SEALs — Eric Greitens, Richard Marcinko and Stew Smith — helped us fill in the blanks, drawing from their experiences to develop a kind of composite sketch of an elusive historic figure in real time.”

He is the unknown shooter. The nameless, faceless triggerman who put a bullet in the head of the world’s most notorious terrorist.
–The Washington Post

Video: Rare Look Inside SEAL Operations
CBS News by Lara Logan
“All the operators that I’ve spoken to say it would have only taken about five minutes to kill Osama bin Laden and capture everybody in that compound. And they would have spent the rest of that time collecting all that evidence.”

A U.S. Navy Seals’ Secret Weapon: Elite Dog Team
Discovery News by Jennifer Viegas
“Members of the U.S. Navy military special forces, however, have yet another formidable weapon in their already impressive arsenal: an elite dog team that can parachute or rappel into action at a moment’s notice.”

In SEAL Team Six Success, Lessons from ‘Horrible Night’ in Iran 30 Years Ago
Christian Science Monitor by Anna Mulrine
“In preparation for the close quarters battles that would come with storming the compound, team members fired upwards of 700 rounds of bullets a week in houses built specifically for learning how to dodge and avoid shooting ricocheted rounds, according to former operatives.”

A SEAL’s Salary: Typical Navy SEAL Makes About $54,000
ABC News by Susanna Kim
“The estimated salary for a Navy SEAL — with over a dozen years of experience and an E-7 pay grade — is about $54,000, according to an estimate based on data from the Department of Defense.”

Navy SEALs Team 6: Super-Secret, Drinkers of Snake Venom, Known for ‘Double Tap’
Washington Post by Elizabeth Flock
“It was known that the unit Team 6 was formed after the Iran hostage crisis, and operated outside the boundaries of international law. And that Team 6 can’t talk about being on Team 6. Ever. Because there is no Team 6.”

Slideshow: Killer SEALs
Foreign Policy, images by documentary photographer Stephanie Freid-Perenchio
“SEALs train at “fast-roping,” descending from a helicopter using only a rope. This is the most dangerous drill that SEALs perform.”

Slideshow: Inside the Covert, Superhuman World of Navy SEALS
Slate.com by Heather Murphy
“Only a tiny percentage of those who apply to be a Navy SEAL ever make it through the rigorous training program. Most participants drop out before the end of Hell Week, a five-day period in which they sleep for a total of four hours.”

And finally as per military.com, find out the level of physical exertion you’ll need to be ready for if you want to be a SEAL: “1.5 Mile Run: Wearing boots and pants, the maximum time allowed for this one is 11 minutes, 30 seconds, but you should be able to cover the distance in 9 to 10 minutes to be competitive.”