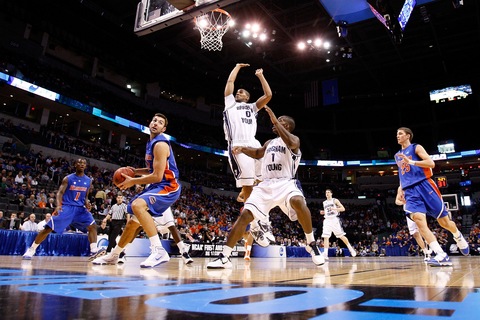 It’s a beautiful, sunny day here in Washington. But there are more than a few people turned away from their office windows, preoccupied with a much smaller orange orb. In case you hadn’t heard, it’s March Madness time.

And that means it’s time for everyone to break out not only their office brackets, but also their preferred method for picking victors — some far more scientific than others. (On the not-so-scientific scale, we’ve heard picking principles ranging from how much you like the sound of the school’s name to how you feel about people who went to that school. Then there’s this bracket based on how much schools’ alumni make post-graduation. Like we said, not so scientific.)

But in surveying the bracket-obsessed media, it’s clear that plenty of thought has been devoted to developing statistical approaches that actually could help you pocket winnings in your office pool.

Getting a lot of attention is the LRMC ranking system — which stands for “logic regression/Markov chain.” Heavy on the math, it considers a team’s results, its schedule and, distinct from many other methodologies, how home court advantages have helped a team’s season performance. And LRMC correctly predicted No. 6 Notre Dame’s 1-point loss to No. 11 Old Dominion earlier Thursday.

(Old Dominion, it should be noted, was Wired’s Mark McClusky’s single biggest ‘undervalued’ team in his comparison of teams’ performances and how the crowd on ESPN is valuing them. Betting with or against the crowd, as McClusky, writes can make or break your bracket.)

There are plenty more tips for picking the perfect bracket — a No. 1 team, for instance, has never been taken out by a No. 16 team — but don’t hold your breath waiting for 100 percent accuracy. Another fun activity out there today is trying to calculate your chances of a perfect bracket. When the WSJ looked into it, their odds range from one in 150 million to one in 9 million trillion if each game were a true toss-up. “Put another way, you are about 60 billion times more likely to win the multistate Powerball lottery.”

Another favorite via Book of Odds: