UPPER LAKE, Calif.  — Days after wildfires left a deadly swatch of destruction in Northern California rural counties, new blazes exploded into life and threatened more homes in what has become an endless summer of flame in the Golden State.

“We’re advised that the fire was threatening structures,” he said.

The area was only about 40 miles (64 kilometers) north of where twin fires in Mendocino and Lake counties have burned an area nearly three times the size of San Francisco, destroyed seven homes and threatened 12,000 more.

The Lake County seat of Lakeport remained under evacuation orders and was a virtual ghost town, although people were allowed back home in several smaller communities as firefighters shored up containment lines. Despite progress, the fires were only 12 percent contained.

Jessyca Lytle fled a fast-moving wildfire in 2015 that spared her property but destroyed her mother’s memorabilia-filled Lake County home.

Lytle found herself listening to scanner traffic Tuesday and fire-proofing her mother’s new home as another wildfire advanced.

“Honestly, what I’m thinking right now is I just want this to end,” Lytle said, adding that she was “exhausted in every way possible — physically, emotionally, all of that.”

“Honestly, what I’m thinking right now is I just want this to end.”

Paul Lew and his two boys, ages 13 and 16, evacuated Saturday from their Lakeport home.

“I told them to throw everything they care about in the back of the car,” said Lew, 45. “I grabbed computers, cellphones, papers. I just started bagging all my paperwork up, clothes, my guitars.”

Lew, who is divorced from Lytle, is camped out at the house in the nearby community of Cobb that she fled in 2015. He is watching over her chickens, sheep and other animals. With a laugh, he said repeated fire alerts have made him an emergency preparation expert. 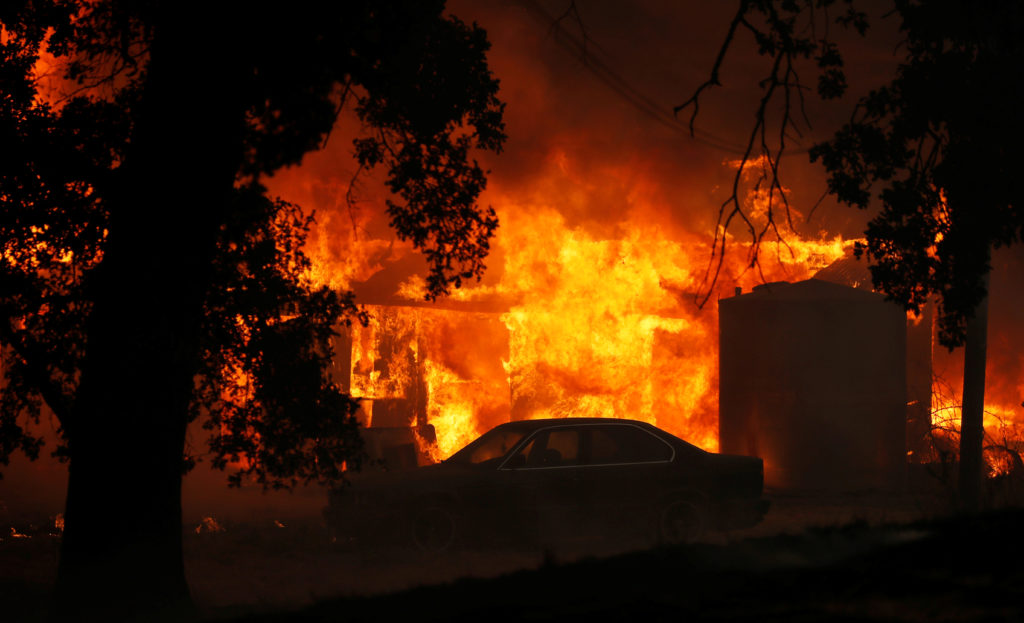 A structure burns out of control in the River Fire (Mendocino Complex) in Lakeport, California, U.S. July 31, 2018. Photo by Fred Greaves/Reuters

To the east, another blaze Tuesday night raged through grassy cattle lands near Yuba City, covering more than 1 1/2 square miles (4 square kilometers) in a few hours.

The area is mainly a ranching area of barns and other buildings and no evacuations were ordered, said Scott McLean of the California Department of Forestry and Fire Protection.

The new fires erupted without warning and spread with shocking speed through forest and brush that have literally become tinder.

“It just goes on and on,” McLean said.

“We had this rain at the beginning of the year and all that did was promote the growing of grass and brush … It’s a Catch 22. It’s growing more product to catch on fire.”

“We had this rain at the beginning of the year and all that did was promote the growing of grass and brush,” McLean said. “It’s a Catch 22. It’s growing more product to catch on fire.

“We’ve never really been out of the drought,” McLean added. “We need several years of significant rainfall … to bring California back.”

He also had a warning for people visiting rural and wilderness areas.

“Pay attention,” he said. “Don’t park the car on dry grass … no campfires, no flame. It doesn’t take anything to start a fire right now.”

Elsewhere, the Carr Fire had burned 965 homes and killed six people in and around Redding. Another 413 outbuildings were also destroyed, and the blaze is now the seventh most destructive wildfire in California history, fire officials said.

The fire had burned more than 176 square miles (457 square kilometers) and was 30 percent contained. 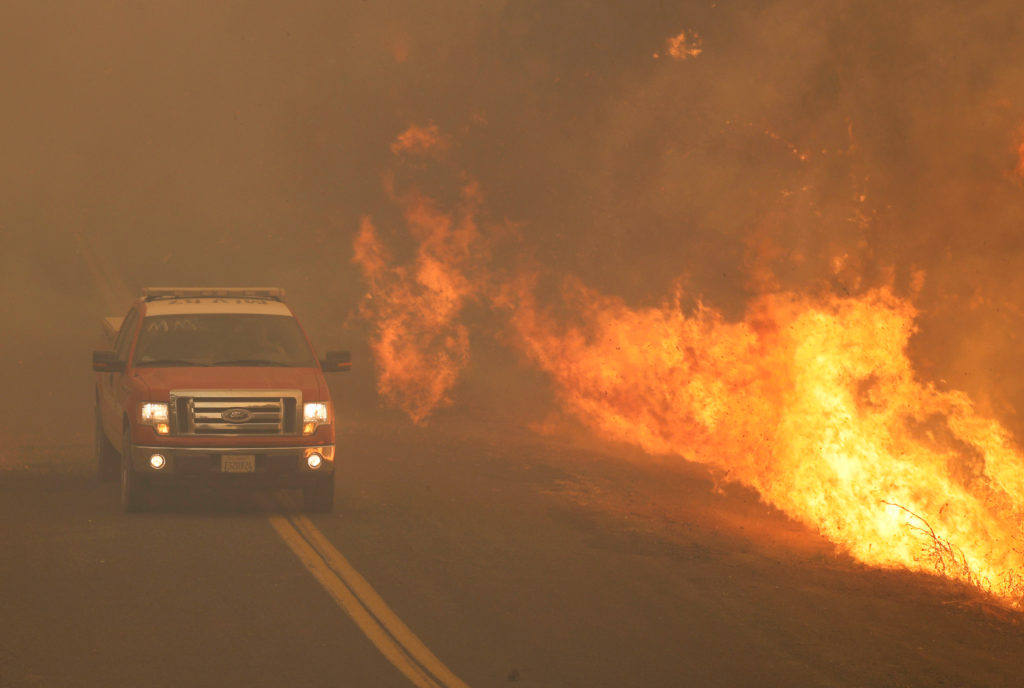 A firetruck rushes past flames that overran a road at the River Fire (Mendocino Complex) in Lakeport, California, U.S. July 31, 2018. Photo by Fred Greaves/Reuters

A relative identified one of the victims as Daniel Bush, 62.

Bush had returned to his mobile home in the community of Keswick last Tuesday after undergoing quadruple heart bypass surgery but he was unable to drive and would have needed help to evacuate when the fire came through the neighborhood on Thursday, his sister, Kathi Gaston, told the Redding Record Searchlight.

Gaston said her brother had wanted to stay in his own home but he had spotty cell service and with the power out, he might not have gotten word of the fire.

Gaston said she couldn’t get to her brother’s house because, with the fire approaching, sheriff’s deputies had blocked the roads and then she herself had to evacuate.

National Park officials said Tuesday the scenic Yosemite Valley and other areas will be closed at least through Sunday due to heavy smoke from the so-called Ferguson Fire. The closure began July 25.

It was the longest closure at Yosemite since 1997 when floods closed the park for over two months.

Left: A firefighter knocks down hotspots to slow the spread of the River Fire (Mendocino Complex) in Lakeport, California, U.S. July 31, 2018. Photo by Fred Greaves/Reuters