A majority of Americans are dissatisfied with President Donald Trump’s response to the violence that erupted Saturday in Charlottesville, Virginia, according to a new poll conducted by the PBS NewsHour, NPR and Marist Poll.

Two-thirds of Americans viewed the car attack that killed one person and injured 19 others at the protest as an act of domestic terrorism, the poll found. Overall, 52 percent of respondents said they don’t think Trump issued a strong enough response to the violent protests in Charlottesville, which were organized by white supremacists and neo-Nazi groups, including some that supported Trump’s campaign last year.

Trump initially blamed the violence on “many sides,” sparking a backlash from Republicans and Democrats alike who criticized the president for not speaking out more forcefully against racism and white supremacists. Trump issued a stronger statement two days later.

But in a press conference Tuesday, Trump again blamed both sides for the violence, claiming that the so-called “alt left” was also responsible for the deadly turn of events. There is no such thing as the “alt-left,” the New York Times reported Wednesday, citing researchers who study extremist groups in the United States. Trump’s latest comments on Charlottesville again cast attention on his reluctance at times to fully distance himself from hate groups, a sharp contrast from the way past presidents have addressed race relations and bigotry in the country.

Overall, the NewsHour/NPR/Marist poll found that just 27 percent of Americans were satisfied with the president’s message after Charlottesville. Another 21 percent of U.S. adults said they had not yet decided if they supported Trump’s response or not. 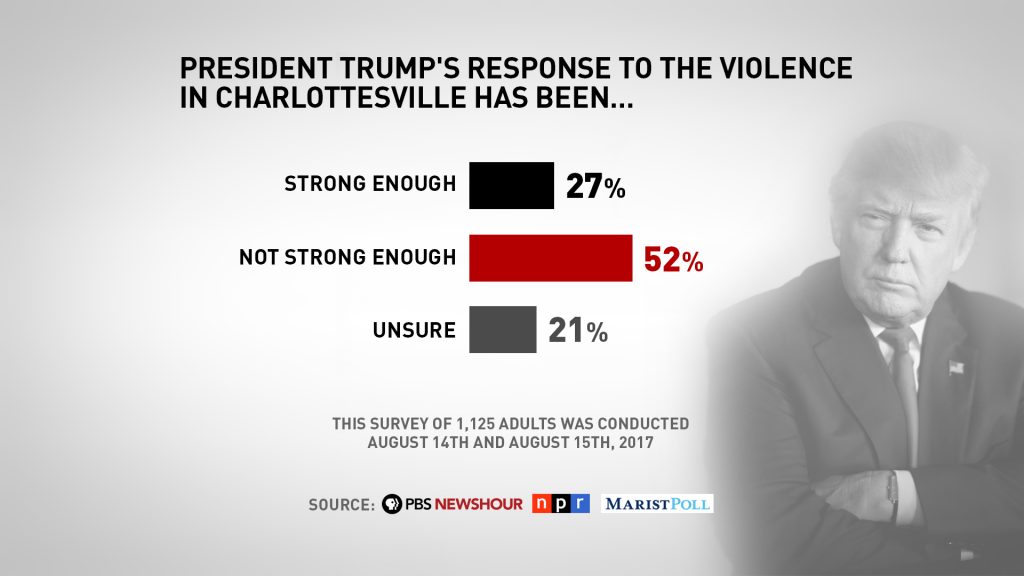 Respondents were sharply divided along political lines, however, with 59 percent of Republicans expressing support for Trump’s statements, while only 10 percent of Democrats and 30 percent of people who identify themselves as politically independent felt the same.

There were also some differences of opinion along racial lines. Among white Americans, 31 percent thought Trump said what needed to be said after Charlottesville, with 20 percent of Hispanics and 13 percent of African-Americans saying the same.

“It’s not surprising that people of color feel the president dropped the ball in his handling of this crisis, but whites are not in his corner, either,” said Lee Miringoff, director of the Marist Institute for Public Opinion. 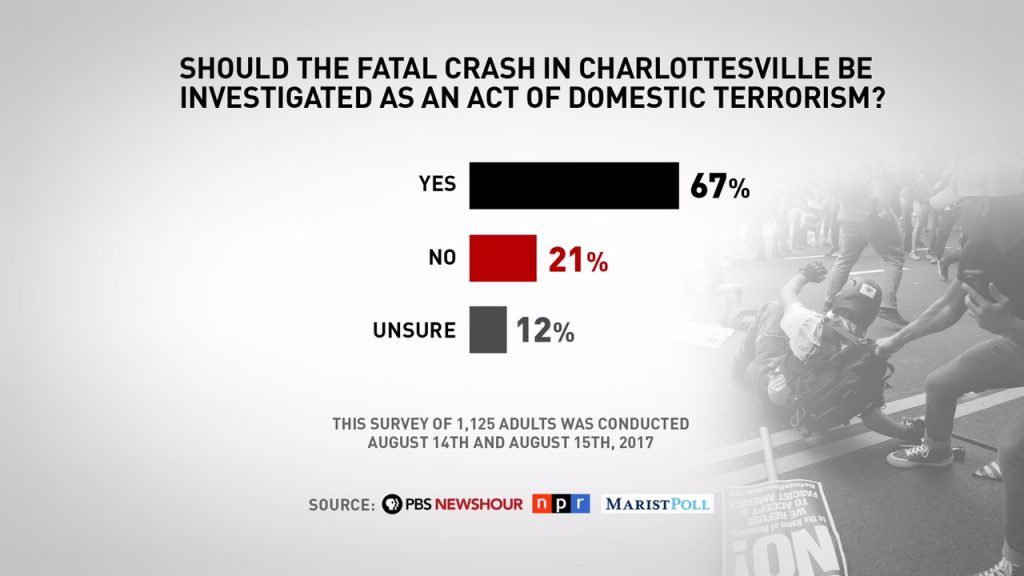 Nearly seven out of 10 Americans — 67 percent — think the automobile attack that left Heather Heyer dead and 19 more people injured should be considered an act of domestic terrorism.

“What’s interesting about the incident in Charlottesville is we’re seeing more consensus of Americans as a whole,” said Barbara Carvalho, who directs Marist Poll at Marist College. “You have this disconnect with what president is saying and what they’re seeing with their own eyes.”

“What’s interesting about the incident in Charlottesville is we’re seeing more consensus of Americans as a whole. … You have this disconnect with what president is saying and what they’re seeing with their own eyes.”

The “Unite the Right” rally in Charlottesville was organized to protest the city’s decision to remove a memorial to Confederate general Robert E. Lee. But the poll found that 62 percent of Americans believe Confederate statues should remain in place as historical symbols.

Republicans were twice as likely as Democrats to say they supported keeping statues that honor Confederate leaders. Two-thirds of whites and Latinos said these statues should not be removed. African-American respondents were split, with 44 percent saying the statues should remain in place, and another 40 percent saying they need to be removed because some people find them offensive. 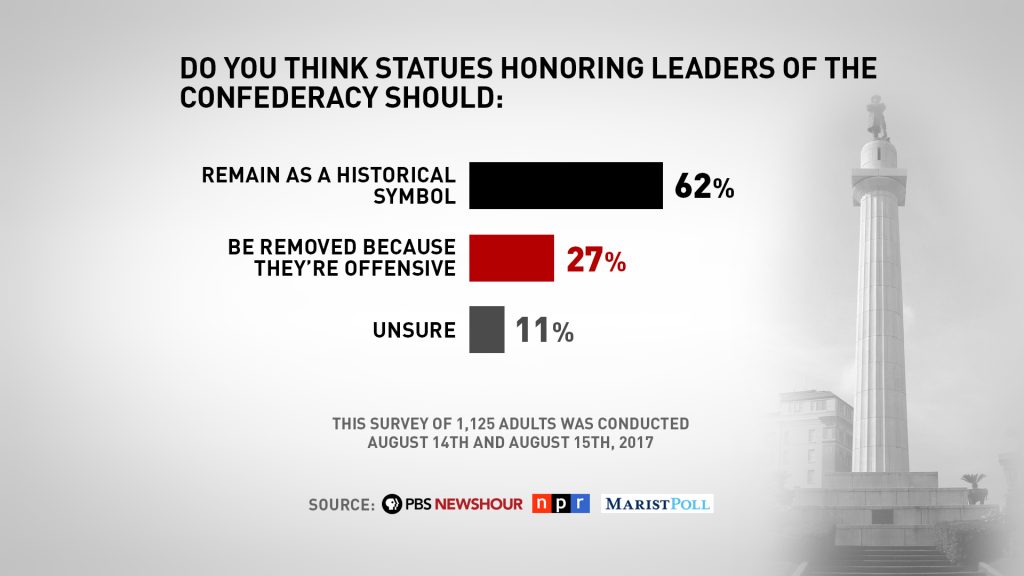 This latest poll, which was conducted August 14 through August 15 and included responses from 1,125 U.S. adults, had a margin of error of 2.9 percent.

Overall, the poll found that a third of Americans — 35 percent — approve of Trump’s job performance, a figure that has remained largely unchanged since he took office. In April, Trump’s approval rating was 39 percent.

The PBS NewsHour/NPR/Marist Poll contacted 1,125 U.S. adults using landline and mobile phones between August 14 and August 15. There is a 2.9 percent margin of error.

Left: A man looks at flowers placed on the road where Heather Heyer was killed when a suspected white nationalist crashed his car into anti-racist demonstrators in Charlottesville, Virginia, U.S., August 16, 2017. REUTERS/Joshua Roberts