In November of 2013, an intern at the New York State Museum in Albany uncovered the only known recording of a speech delivered by Dr. Martin Luther King Jr. on Sept. 12, 1962, at the Park Sheraton Hotel in New York City.

For decades, state officials believed the only remnant of King’s remarks was an annotated copy, marked up by an audio engineer.

The speech is notable in that it captures King at a critical moment in the civil rights movement. He and his allies had launched an unsuccessful campaign to integrate the city of Albany, Georgia — and in the three weeks before the speech, three black churches in Georgia had been burned to the ground.

Having an audio recording of King’s speech offers new perspective on his intentions and delivery. “Having read it, it’s very different to hear it,” said New York Education Commissioner John King, who oversees the museum.

“You get to hear … the powerful way in which King approached the speech as a speaker. You also could see where he and his choice of words departed from the written text. And you also get much more of a sense of Dr. King as a speaker and author.”

But the speech also marked a unique occasion: the 100-year anniversary of a little-known historical document called the preliminary Emancipation Proclamation.

It’s a handwritten warning from President Abraham Lincoln, cautioning that he intended to free slaves in all states that wouldn’t leave the Confederacy in the midst of the Civil War. King’s speech was part of a commemoration event hosted by then-New York Governor Nelson Rockefeller.

And by coincidence, the parchment in Lincoln’s hand is held at the same museum and library complex that’s home to the 1962 King recording.

Lincoln heavily cited the Second Confiscation Act as part of his legal rationale to release slaves in the Confederacy. He cut and pasted sections of July 17, 1862 legislation that “forever freed” the slaves of civilian and military Confederate officials, but only applied to areas occupied by the Union Army.

Like King’s speech, there are also visible annotations on the document, including those of Secretary of State William Seward. State historians also believe Lincoln’s fingerprint is visible. 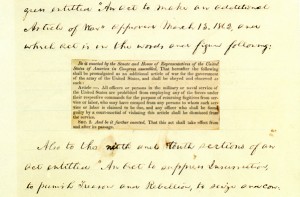 The New York State Museum launched an online exhibition Monday to mark the recording’s discovery and showcase the museum’s holdings of two critical pieces of Americana.

We’ll have more on the speech and the document that inspired it on the PBS NewsHour Monday evening.