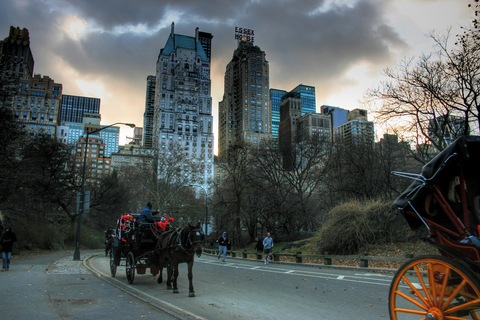 After the upcoming New York City mayoral election, a quintessential Big Apple experience could become a thing of the past.

Central Park horse and buggy rides have long been the subject of criticism from animal rights groups and now the city maybe be joining the opposition. The top candidates in the mayoral race both support replacing horses with a man-made alternative.

“We are in the biggest, densest urban area in North America. It is not a place for horses. They are not meant to be in traffic jams,” said Bill de Blasio, the Democrat front-runner, at a press conference with New York Class, an animal rights group.

De Blasio’s Republican opponent Joe Lhota is also open to swapping horses with an alternative, such as 8-seat electric cars.

New York carriage drivers believe the horses are treated humanely and replacing them with an electric option would take away from a classic New York City experience.

“People come to us for the clip-clop,” said Christina Hansen, a carriage driver from Kentucky. “Nobody wants to pet a fender.”

City residents appear mixed on the issue, with some supporting a horse-less option, while others feel it would be a shame to lose the tradition.