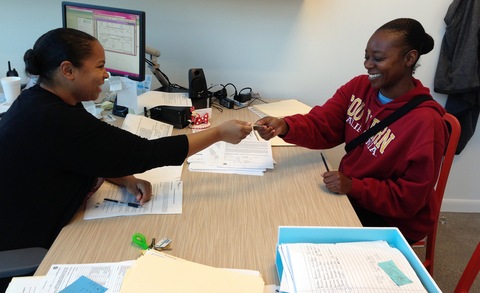 Dior Hall, right, gets the keys to her new apartment after receiving a little help from an anonymous NewsHour viewer. Photo by Diana Liao

One of those impacted was Dior Hall, a 36 year-old, part-time Walgreens cashier, who had been living in an emergency homeless shelter for about a year and a half. We interviewed Hall early in the morning as she was gathering her personal belongings and preparing to leave the shelter.

“There’s no words to describe how it feels to have to get up every day and not have anywhere to go,” Hall told the NewsHour. Hall was supposed to move into her furnished Bayview Hill Gardens studio apartment on Oct. 8, but housing officials said they were unable to give her the keys because they couldn’t get a signed lease agreement with the Department of Housing and Urban Development (HUD) which is subsidizing her rent and sixteen other units in the 73-unit building. (The other apartments are paid for by the City of San Francisco, nonprofit groups and private investors).

After seeing our report on Wednesday, an anonymous NewsHour viewer paid for Dior’s first month’s rent. She was able to move in over the weekend. I caught up with Hall after she put in an eight-hour work shift late last night. She was in her new apartment. She told me she had a mix of emotions when she finally got the keys. “It was total happiness, exhaustion and excitement,” she said. “One of the first things that hit me when I walked through the door was a sense of responsibility. I need to pay my own bills, pay my rent. And I need to keep it going so I don’t have to go through (being homeless) again. In the shelter, I had to be up at 6 a.m. every morning and out by 7 a.m. To be able to sleep in … my own bed and not on a mat. I’m just very, very happy.”

And she is extremely grateful to the viewer who helped her move in, despite the fact that the federal government shutdown continues.

The anonymous donor explained the reason for the donation in this statement:

Individuals who do kind things, unselfish things, just want our members of Congress to do kind things, unselfish things, too, because it makes our democracy stronger and better for everyone when Congress does it for the whole country, for all of our fellow Americans. That is why we have a government. And contrary to what some may think, yes, people ARE entitled to food and housing and some little bit of happiness in the richest strongest country on Earth.

Watch the original report below: