Next steps for caravan will unfold mostly out of public view

TIJUANA, Mexico — The caravan of Central Americans seeking asylum in the United States sought the world’s attention as scores of migrants traveled through Mexico on a journey to escape their violent homelands.

Now that the group has arrived at the border, the next steps in their journey will unfold mostly out of public view.

The caravan first drew attention in the U.S. when President Donald Trump promised that his administration would seek to turn the families away. The rest of the asylum-seeking process will happen slowly and secretively in immigration courts.

Dan Kowalski, editor of Bender’s Immigration Bulletin, said the public will “probably see very little (of the caravan cases) unless the applicant is represented and the attorney makes an effort to bring the client into the limelight.”

A total of 28 caravan members were accepted for processing Monday and Tuesday by U.S. border inspectors at San Diego’s San Ysidro crossing, an official with U.S. Customs and Border Protection said. The crossing, the nation’s busiest, processed about 50 asylum seekers a day from October through February, suggesting the wait will be short. 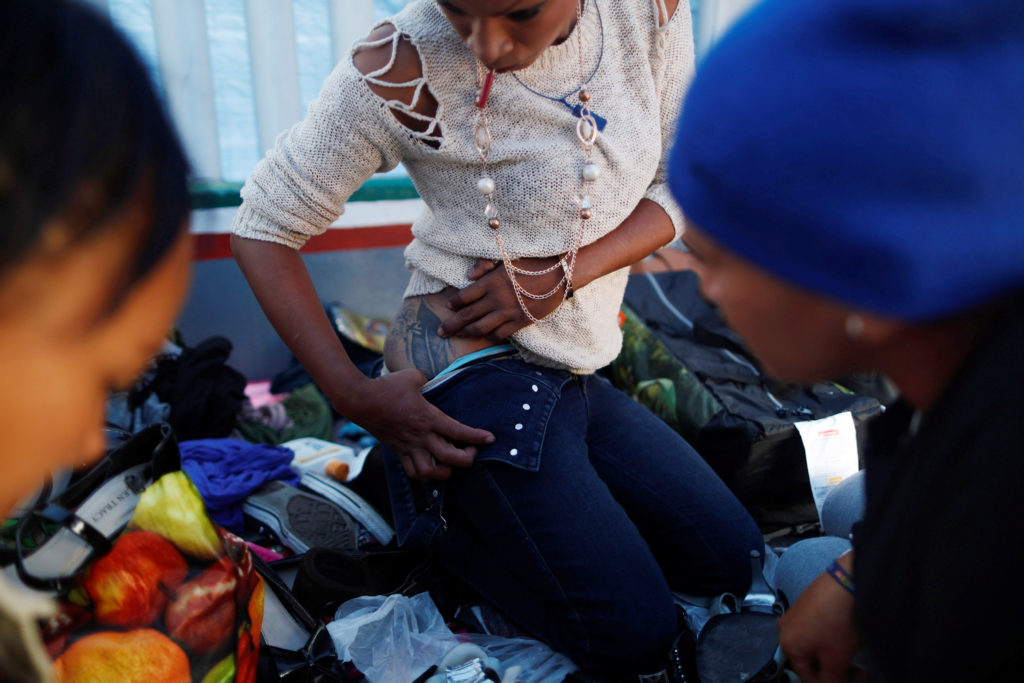 Channel, 28, a Honduran and a member of a caravan of migrants from Central America, checks her hip, where the name and telephone number of her sponsor in the U.S. is written, before she enters the United States border and customs facility, where she is expected to apply for asylum, in Tijuana, Mexico, on May 1, 2018. Photo by Edgard Garrido/Reuters

Under U.S. asylum practices, people spend up to three days at the border inspection facility before being transferred to a long-term detention center. An asylum officer interviews them for an initial screening, usually within a week or so, to determine if their cases should advance to immigration court, which can take several years.

The courts often conduct business behind closed doors. Files are not public, and, unlike criminal or civil courts, access for journalists and others is limited.

The caravan’s numbers, while tiny compared to previous surges of Central Americans to South Texas and Haitians to San Diego, will be a test of Trump’s tough words. Administration officials have railed against what they call legal loopholes and “catch-and-release” policies that allow people seeking asylum to be freed while their cases are adjudicated, but any significant changes must be addressed by Congress or in the courts.

Attorney General Jeff Sessions has pledged to send more immigration judges to the border if needed and threatened criminal prosecution. On Monday, the Justice Department said it filed illegal-entry charges against 11 people identified as caravan members.

Homeland Security Secretary Kirstjen Nielsen said asylum claims will be resolved “efficiently and expeditiously.” She also warned that anyone making false claims could be prosecuted and said asylum seekers should seek protection in the first safe country they reach, including Mexico.

U.S. attorneys who counseled asylum seekers in Tijuana warned that they could be separated from family and spend many months in detention, a shift from the Obama administration.

Separating asylum-seeking families has become more common, as has detaining them while their cases wind through the courts, said Leon Rodriguez, director of U.S. Citizenship and Immigration Service from 2014 to 2017, which oversees asylum petitions.

The U.S. Immigration and Customs Enforcement agency has limited beds in family detention centers and may also choose to release adults and their children while their cases wind through the system, often with orders that some of them wear ankle monitors. Children traveling alone are placed with family, other sponsors or in group homes overseen by the Health and Human Services Department.

Nearly 80 percent of asylum-seekers passed the initial screening from October through December, but few are likely to win asylum, which requires the petitioner to show well-founded fear of persecution on grounds of race, religion, nationality, political beliefs or membership in a social group.

The denial rate for El Salvadorans seeking asylum was 79 percent from 2012 to 2017, according to Syracuse University’s Transactional Records Action Clearinghouse. Hondurans were close behind with a 78 percent denial rate, followed Guatemalans at 75 percent.

Left: People traveling with a caravan of migrants from Central America are pictured at a camp near the San Ysidro checkpoint, after U.S. border authorities allowed the first small group of women and children entry from Mexico on Monday night, in Tijuana, Mexico May 1, 2018. Photo by Edgard Garrido/Reuters