PORTLAND, Ore. — Oregon volunteers scrambled to hand out water, portable fans, popsicles and information about cooling shelters to homeless people living in isolated encampments on the outskirts of Portland as the Pacific Northwest sweated through another heat wave.

In an area more used to temperate weather, authorities are trying to provide relief to the vulnerable, including low-income older people and those living outdoors. They are mindful of a record-shattering heat wave in late June that killed hundreds in Oregon, Washington and British Columbia when the thermometer went as high as 116 degrees Fahrenheit (47 Celsius).

In Portland, temperatures reached 103 F (39 C) by late afternoon Thursday and more heat was expected Friday. It was hotter than Phoenix, where the desert city hit a below-normal 100 F (38 C). In Seattle, highs were in the 90s in a region where many don’t have air conditioning. In Bellingham, Washington, on Thursday the high hit 100 F (38 C) for the first time on record. 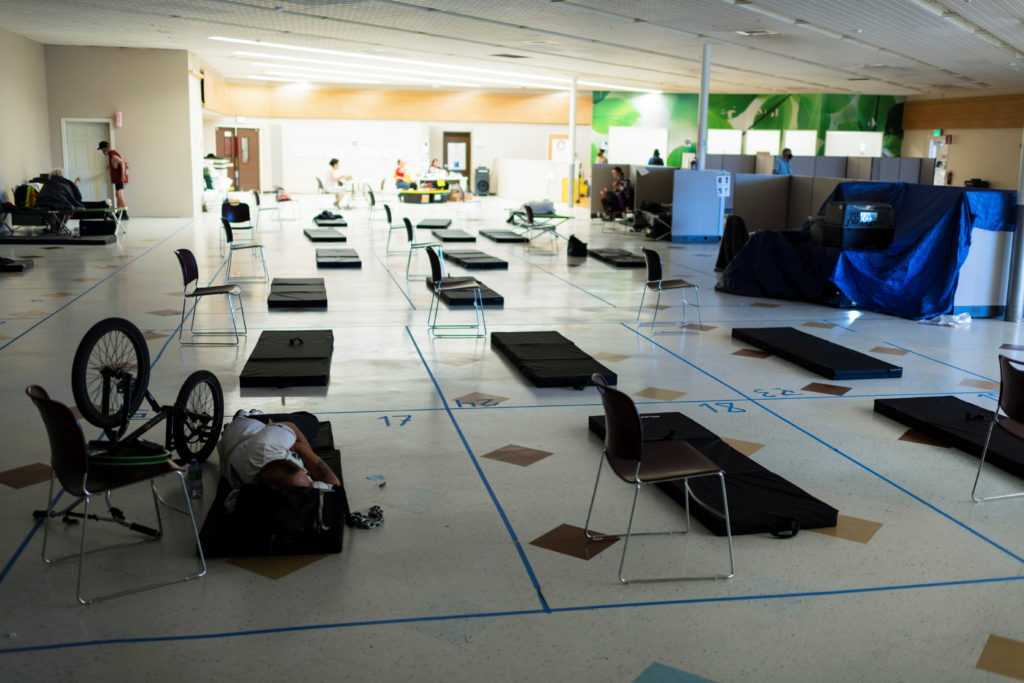 A man rests on a cot inside a cooling shelter during a heatwave in Portland, Oregon. Photo by Mathieu Lewis-Rolland/Reuters

In Portland, a nonprofit group that serves the homeless and those with mental illness used three large vans to transport water and other cooling items to homeless encampments along the Columbia River on the eastern outskirts of the city.

The effort was important because people experiencing homelessness are often reluctant to go to cooling centers, said Kim James, director of homeless and housing support for Cascadia Behavioral Healthcare.

Scott Zalitis, who was shirtless in the heat, ate lime-green popsicles handed out by the group and told volunteers that the temperature at his campsite reached 105 F (41 C) the day before. A huge cooler full of food spoiled when all the ice melted and he couldn’t find any more to buy.

“It’s miserable. I can’t handle the heat no matter what. So, I mean, it’s hard to stand. Even in the shade it’s too hot,” said Zalitis, who became homeless last year when the apartment where he subleased a room burned down in an electrical fire. “You want to stay somewhere that’s cool, as cool as possible.”

The encampment, where rusted-out cars and broken-down RVs mixed with tents and piles of garbage, was in sharp contrast to downtown Portland, where sweaty pedestrians cooled off by running through a large public fountain in a riverfront park. 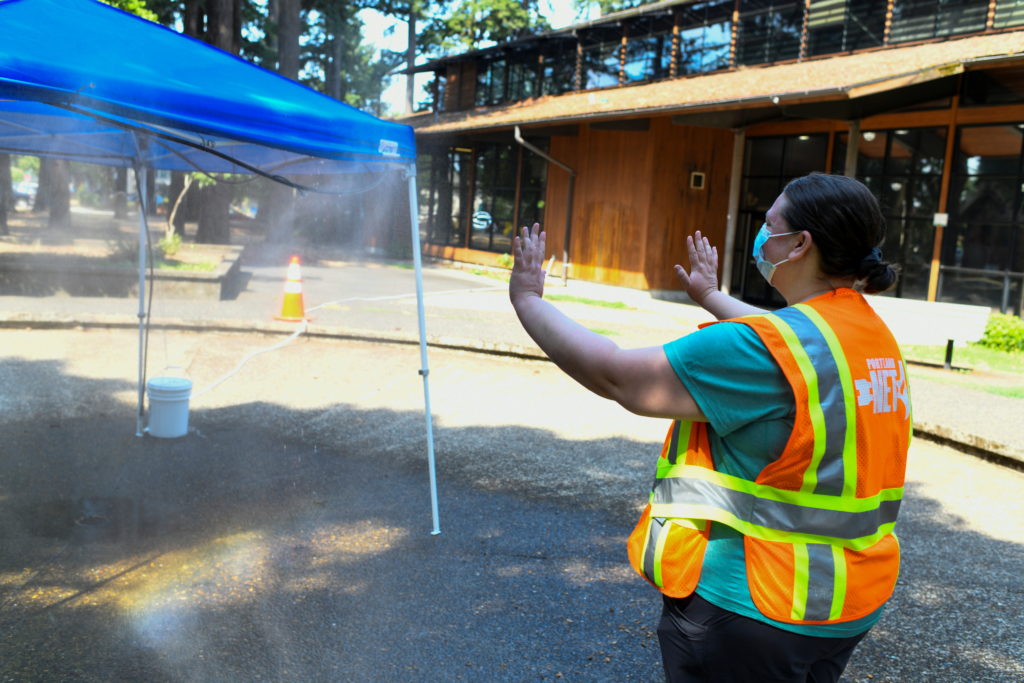 A member of the Neighborhood Emergency Team tests a misting station as a heat wave continues in Portland, Oregon. Photo by Mathieu Lewis-Rolland/Reuters

Luna Abadia, 17, was out training with her cross country team from Lincoln High School in the morning when the group stopped for a few minutes at the fountain. The runners normally train at 4 p.m., but in recent weeks, they have have had to shift it to 8 a.m. — and it’s still oppressively hot, she said.

“It was very hot, lots of sweat. That’s something we’ve noticed in the past week or so,” Abadia said.

Oregon Gov. Kate Brown has declared a state of emergency and activated an emergency operations center, citing the potential for disruptions to the power grid and transportation. City and county governments have opened cooling centers, extended public library hours and waived bus fare for those headed to cooling centers. A 24-hour statewide help line will direct callers to the nearest cooling shelter and offer safety tips.

Intense heat waves and a historic drought in the American West reflect climate change that is making weather more extreme.

Abadia said changes brought on by climate change that she has noticed in her life prompted her to start a youth-run organization to get more young people involved in the issue.

“Climate change is everything I’ve been thinking about for the past weeks,“ she said. “This heat wave and the wildfires we faced here a year ago — and even now around the world — have really been a new reminder to what we’re facing and, kind of, the immediate action that needs to be taken.”

READ MORE: We don’t know exactly how many people are dying from heat — here’s why

Left: Pallets of bottled water are seen at a supply shelter downtown as a heat wave continues in Portland, Oregon. Photo by Mathieu Lewis-Rolland/Reuters

Heatwaves are becoming more common. Here’s how the U.S. must plan for them