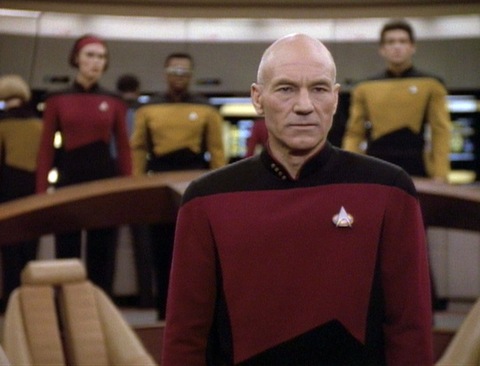 Congressional leaders already have a lot of power, but do they secretly want to captain the USS Enterprise? In an in-depth profile of NSA Director Keith B. Alexander, Foreign Policy reveals that one of the ways the general endeared himself to lawmakers and officials was to make them feel like Jean-Luc Picard, captain of the starship Enterprise from the TV series “Star Trek: The Next Generation.”

“When he was running the Army’s Intelligence and Security Command, Alexander brought many of his future allies down to Fort Belvoir for a tour of his base of operations, a facility known as the Information Dominance Center. It had been designed by a Hollywood set designer to mimic the bridge of the starship Enterprise from Star Trek, complete with chrome panels, computer stations, a huge TV monitor on the forward wall, and doors that made a ‘whoosh’ sound when they slid open and closed. Lawmakers and other important officials took turns sitting in a leather ‘captain’s chair’ in the center of the room and watched as Alexander, a lover of science-fiction movies, showed off his data tools on the big screen.

‘Everybody wanted to sit in the chair at least once to pretend he was Jean-Luc Picard,’ says a retired officer in charge of VIP visits.”

UPDATE: Glenn Greenwald at the Guardian has located photos he believes depict the Information Dominance Center on the website of an architectural firm in Virginia. More photos are located on the firm’s website. (PDF)