Obama pushes for family-friendly policies in the workplace

President Barack Obama is expected to speak at the daylong Working Families Summit in Washington, D.C. on Monday at 1:40 p.m. EST. PBS NewsHour will live stream his remarks.

The United States is the only industrialized nation that doesn’t mandate paid leave for mothers of newborns, although Obama says he’d like to see that change.

“Only three countries in the world report that they don’t offer paid maternity leave — three — and the United States is one of them,” Obama said in his weekly address. “It’s time to change that. A few states have acted on their own to give workers paid family leave, but this should be available to everyone, because all Americans should be able to afford to care for a family member in need.”

Obama’s summit comes in a midterm election year focused heavily on attracting women voters, and the White House was devoting all its star power to the event — and even a surprise appearance by a celebrity to echo Obama’s criticism of “Mad Men” policies in today’s workplace. Christina Hendricks, who plays single mom Joan on the AMC dramatization of a 1960s ad firm, said, “In the 21st Century the only place for a story like Joan’s should be on TV.”

Obama planned to speak midday, have lunch with working parents and a later meeting with business leaders. First lady Michelle Obama planned to deliver a closing speech, while Vice President Joe Biden and wife Jill opened the event by talking about the value of family time. “Not all of us have the kind of flexibility that I have,” Biden said. 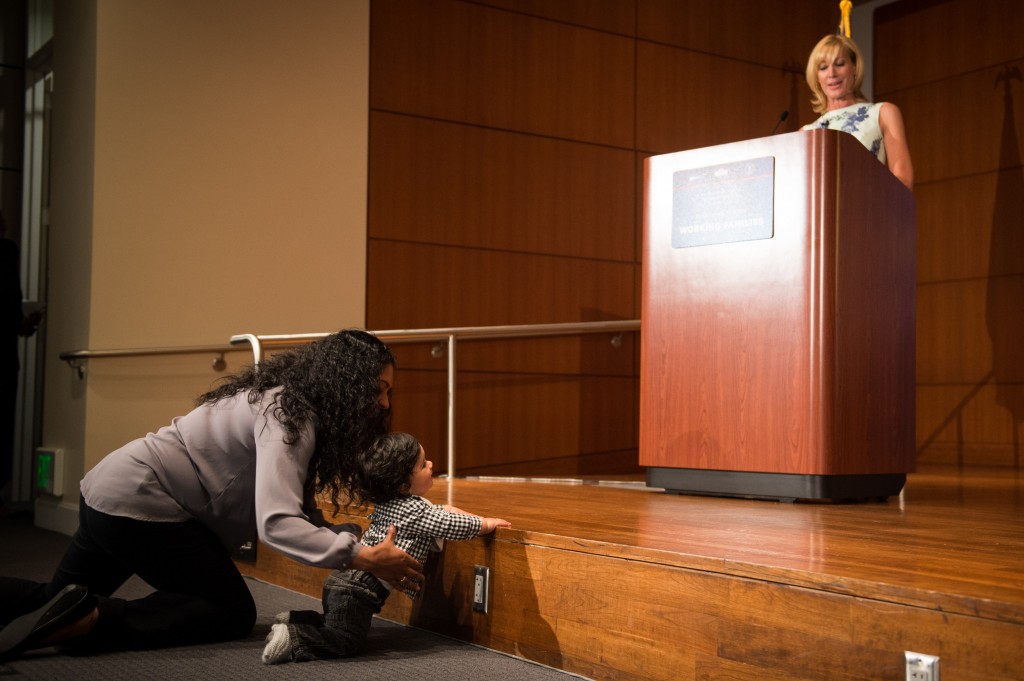 The White House held a Working Families Summit in San Francisco, Calif. on May 27, 2014 as part of a larger campaign to promote the economic issues that women face. Photo by U.S. Department of Labor

California, Rhode Island and New Jersey have a system of paid leave, but it’s unclear how Obama would fund a national system. Obama has not endorsed legislation that would create one funded by a payroll tax, and he pledged in his 2008 presidential campaign not to raise taxes on families making under $250,000 a year.

Obama adviser Valerie Jarrett said in a conference call with reporters Sunday that the president is trying to start a national conversation to explore the issue.

“Cost is an issue for any federal program and we need to make sure we do this in a way where we are not raising taxes on middle-class families,” she said. “But we also know what a good investment in our workforce it would be if they had paid leave, and that investment will pay great returns.”

Rep. Rosa DeLauro, D-Conn., has introduced legislation based on the state plans that would provide a paid leave insurance fund in the Social Security Administration, paid for by contributions from employees and employers of 0.2 percent of wages. She said she’s personally encouraged the president to back it and hopes he will, despite his tax pledge.

“We’re talking about 2 cents of every $10,” she said in an interview at the summit. She said without such a fund, eight out of 10 workers can’t take advantage of their right for family leave because they can’t afford it.

When Obama came to the White House, he instituted six weeks of paid leave for his workers when they have a child, get sick or injured or need to care for an ailing family member, using his authority to set his staff’s compensation under the personnel code. He does not have the power to award paid leave to other federal workers without congressional action since they are covered under a different section of law. The White House has supported the goal of legislation introduced by lawmakers to change that, but it has yet to get through Congress.

Despite the paid leave for White House staff, the challenges of balancing parenting and working still remain evident there. The president’s top aides include several dads of minor children but hardly any mothers with school-age kids — National Security Adviser Susan Rice being one prominent exception.

“It is a very challenging and demanding environment” for parents, Jarrett said at a media availability hosted by The Christian Science Monitor. “And I think part of what we have to achieve here is to make it easier — that doesn’t mean it’s going to be easy — it’s just going to be easier. And I think that’s what the private sector acknowledges.”

Obama planned to issue a presidential memorandum Monday directing federal agencies to expand flexible work arrangements when possible. Obama also planned to urge Congress to pass legislation requiring employers to accommodate pregnant employees so they can continue to perform their jobs. He also is ordering the Labor Department to create an interactive map that shows the rights of pregnant workers in each state.