Obama will speak Thursday on the Civil Rights Act at a conference at the Lyndon Johnson presidential library in Austin. PBS NewsHour will live stream the president’s remarks around 1 p.m. EDT

HOUSTON — Barack Obama was 2 years old when Lyndon Baines Johnson sat in the East Room of the White House with Martin Luther King Jr. and signed the Civil Rights Act, putting an end to an America where schools, restaurants and water fountains were divided by race. Half a century later, the first black man to become president is commemorating what’s been accomplished in his lifetime and recommitting the nation to fighting deep inequalities that remain.

Obama takes the podium on Thursday afternoon on the third and final day of a 50th anniversary summit that’s bringing four living presidents, civil rights leaders and cultural icons to the LBJ Presidential Library in Austin, Texas. The celebration comes as Johnson’s legacy, four decades removed from the end of the Vietnam War, is being revisited, with his prolific domestic achievements serving as a reminder of how little Washington seems to accomplish today.

For Obama, who was criticized by some African-Americans in his first term for doing too little to help minorities, the commemoration dovetails with a focus on inequality and economic opportunity that has become an early hallmark of Obama’s second term with modest success. Democrats have seized on the broader theme as their battle cry for the election year.

Lingering injustices in the U.S. notwithstanding, the significance of Obama’s participation in Thursday’s ceremony isn’t lost on Rep. John Lewis, D-Ga., who withstood violence and arrest during the civil rights marches through Alabama in the mid-1960s.

“If somebody told me back in 1964 that a man of color would be president of the United States, I would have said, `You’re crazy, you’re out of your mind, you don’t even know what you’re talking about,'” Lewis said in an interview. “When people say to me nothing has changed, that feels like, come and walk in my shoes.”

The summit kicked off Tuesday with remarks from former President Jimmy Carter, who lamented residual racial inequality and Americans’ apathy about the problem. Former President Bill Clinton followed on Wednesday, riffing on immigration and voting rights while warning that a modern-day reluctance to work together threatened to “put us back in the dustbin of old history.”

After campaign events Wednesday night in Houston, Obama and first lady Michelle Obama were to fly to Austin in time to appear at the summit Thursday afternoon. Former President George W. Bush will deliver the finale in the evening.

“It’s probably the most important moment in the history of the library since LBJ died in 1973,” Mark Updegrove, the presidential library’s director, said of the 50th anniversary.

Lyndon Johnson presidential library in Austin to speak at a conference on the 50th anniversary of the Civil Rights Act of 1964.

“The Emancipation Proclamation was a proclamation, but not a fact,” Goodwin said. “LBJ brought it closer to being a fact. The election of the first African-American president brings it yet closer.”

But the vision is not yet fulfilled, civil rights activists insist. They’re wary of allowing celebrations of what’s been accomplished to become excuses for failing to finish the job. 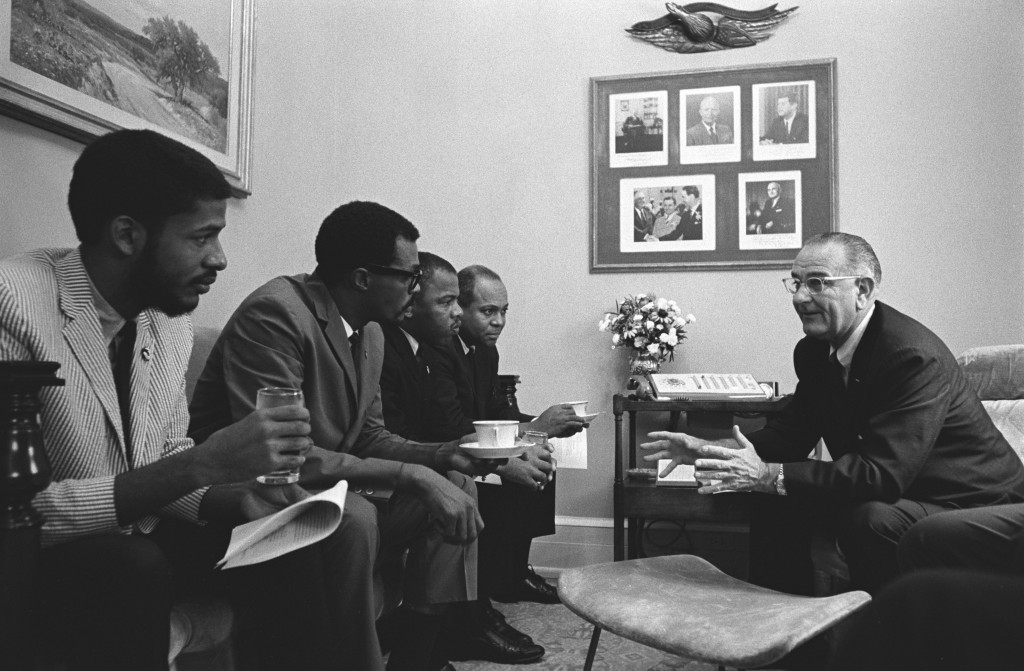 Johnson seemed to foreshadow those concerns when he warned in 1965, days after Lewis and others were beaten in Selma, Ala., that the battle was far from over.

“It’s not just Negroes, but really it’s all of us, who must overcome the crippling legacy of bigotry and injustice,” Johnson said, using the vernacular of the time. “And we shall overcome.”

As activists and leaders look to the next 50 years, the focus has turned to other areas where they say injustice remains and can be reduced, including equal pay for women, same-sex marriage and poverty – an issue that echoes Johnson’s own War on Poverty. So too have voting rights attracted renewed attention in the wake of a Supreme Court ruling gutting much of the Voting Rights Act – another part of LBJ’s legacy.

For Johnson’s family, the symbolism is also personal. The day that LBJ signed the Civil Rights Act was the day his daughter, Luci Baines Johnson, turned 17. With no time to acquire a Hallmark card, her father gave her a handwritten note that year – the only one she has from her father, she said.

“And yet on my father’s 100th birthday as we stood at his gravesite and (paid) tribute to the man we loved, we couldn’t help but think that he was getting the best birthday present any man could ever hope for – but especially Lyndon Johnson – because Barack Obama was being nominated to head his party as its presidential candidate,” she said.

The convergence of such historical heavyweights – all the living presidents except George H.W. Bush, who is 89, are attending – underlines a renaissance of sorts for Johnson, whose legacy for decades was stained by the expansion of the Vietnam War under his command. With time has come a renewed look at what he managed to accomplish on the domestic front, a long list of sweeping reforms that includes Medicare, Medicaid, fair housing and immigration legislation.

The aggressive pace of Johnson’s legislative victories has offered a contrast to Obama in the years since Republicans seized control of the House two years into Obama’s presidency. Republicans accuse Obama of lacking the enthusiasm to engage with Congress that marked Johnson’s tenure. White House aides and Democrats point to Obama’s ambitious health care law and argue that institutional changes unrelated to Obama have made governing near impossible.