WASHINGTON — Former Pentagon official Ashton Carter has emerged as President Barack Obama’s top candidate to become the next defense secretary, according to administration officials, putting him in line to take over a sprawling department that has had an uneasy relationship with the White House.

Carter moved to the top of the White House’s short list after several leading contenders pulled their names from consideration for what is typically a highly sought-after Cabinet spot. Officials say Carter is well-respected both in the West Wing and at the Pentagon, where he served as deputy defense secretary until last year.

If Obama moves forward with Carter’s nomination and he is approved by the Senate, the 60-year-old would replace Chuck Hagel, who resigned as Pentagon chief last week under pressure from Obama.

Hagel’s resignation highlighted ongoing tensions between the White House and the Pentagon, where top officials have complained about West Wing micromanagement and a lack of clarity in Obama’s policy-making. Perhaps as a result of those concerns, Obama found himself with a far shorter list of possible replacements for Hagel that the White House may have expected. 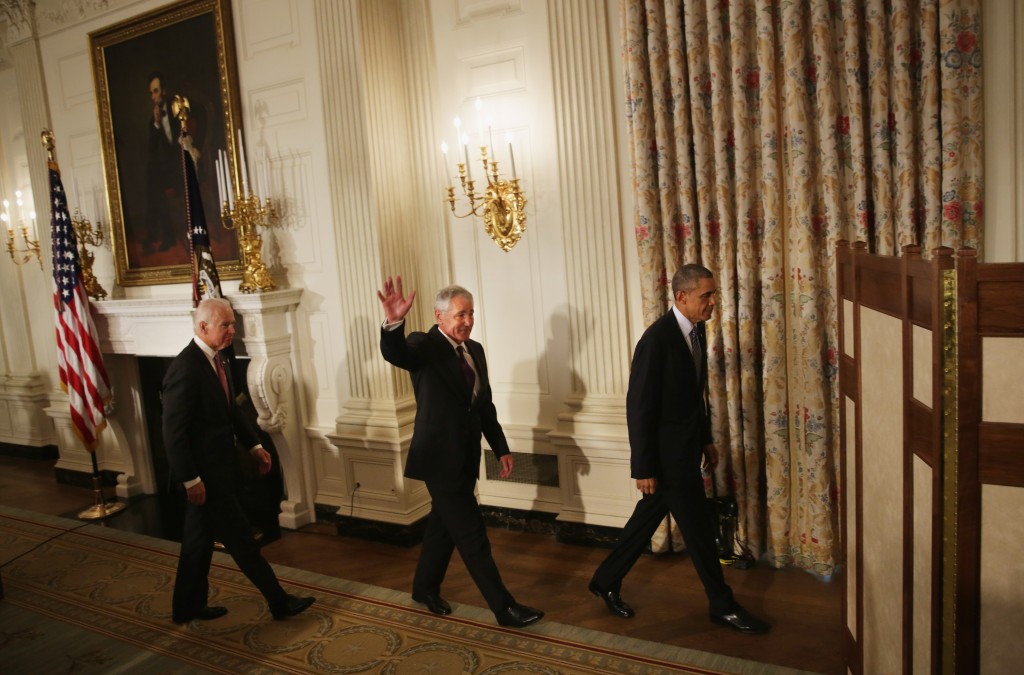 Homeland Security Secretary Jeh Johnson was among those considered for the Pentagon post, but told the White House he’d rather stay put, according to people familiar with the process. Michele Flournoy, one of Obama’s top choices, quickly took her name out of contention, in part because of concerns over the tight rein the White House has tried to keep on the Defense Department. And Sen. Jack Reed, a Rhode Island Democrat and West Point graduate, also made clear within hours of Hagel’s resignation that he wasn’t interested.

Defense analyst Anthony Cordesman said that as Obama approaches the end of his presidency, the Cabinet post is “not particularly desirable” for anyone with broader political ambitions.

“It’s very unlikely you will get political visibility or credit for being the secretary,” said Cordesman, who works at the Center for Strategic and International Studies. “There are just too many problems and uncertainties.”

Among them: questions about the effectiveness of Obama’s military campaign against the Islamic State in Iraq and Syria, Russia’s continued provocations in Ukraine, tensions between the White House and Defense Department over closing the Guantanamo Bay, Cuba, detention center, and concerns at the Pentagon over the impact of deep spending cuts.

Hanging over all of those policy concerns is the uneasy relationship between the White House and the Pentagon throughout Obama’s six years in office. His first two defense secretaries, Robert Gates and Leon Panetta, have been bitingly critical about White House efforts to micromanage the Pentagon. And Hagel is said to have grown frustrated by the White House’s drawn-out policymaking process and lack of clarity in the president’s eventual decisions.

Lawrence Korb, a former assistant defense secretary, said that with just two years left in Obama’s presidency, the next Pentagon chief will be hamstrung in efforts to shape the administration’s policies and the department’s relationship with the White House.

“The clock is ticking in terms of being able to make significant changes,” said Korb, a senior fellow at the Center for American Progress, a think tank closely aligned with the White House.

Mindful that the window on Obama’s administration is closing, some White House officials are pressing the president to name Hagel’s replacement quickly. An announcement could come as early as this week, according to officials who insisted on anonymity because they were not authorized to publicly discuss Obama’s decision-making process.

Carter has extensive experience in the national security arena. Before he served as deputy defense secretary from October 2011 to December 2013 he was the Pentagon’s technology and weapons-buying chief for more than two years.

“He’s a technocrat and a good manager,” said Jane Harman, a former California congresswoman and now president of the Wilson Center. “He knows the acquisitions side of the building and has impressed the military with his commitment to the troops.”

Carter has bachelor’s degrees in physics and medieval history from Yale University and received his doctorate in theoretical physics from Oxford University, where he was a Rhodes Scholar. He has served on the advisory boards of MIT’s Lincoln Laboratories and the Draper Laboratory. He has extensive knowledge of the inner workings of the U.S. nuclear arsenal.

Some administration officials had been pushing Johnson, the Homeland Security secretary, as a candidate for the Pentagon job. Johnson is a favorite in the West Wing, where officials have praised the process he ran to provide Obama with recommendations for executive actions on immigration.

But Johnson’s involvement in that effort risked turning his confirmation hearing into a referendum on the president’s immigration moves, which Republicans staunchly oppose. A move to the Pentagon would have also pulled Johnson out of DHS just as the agency is implementing the executive actions he spent months crafting.

Left: Ashton Carter testifies during a hearing before the Senate Armed Services Committee May 19, 2011 on Capitol Hill in Washington, DC. Photo by Alex Wong/Getty Images