Only one percent of male military victims report sexual assault

WASHINGTON — Greg Nelson had just turned 21 when he went out partying with friends in Southern California and got really drunk. So, when a man he didn’t know offered to let him crash in a nearby apartment, his friends urged him to accept.

A Marine who had joined the Corps in 2007, Nelson remembers getting sick and being offered water that seemed to have white specks in it. He said the man then offered him another glass of water and a pill that was supposedly Motrin.

What happened next is a bit of a blur to Nelson, who says he blacked out and woke up feeling like he was “in a vegetative state.” He remembers the man sexually assaulting him, but says he couldn’t move and blacked out again.

Sexual assaults on men in the military happen more often than people might think. But Nelson, who left the Marine Corps in 2011 as a corporal, is one of the rare men willing to report it and talk about it openly.

According to an anonymous survey released last week by the Pentagon, nearly 1 percent of males in the U.S. military said they had experienced unwanted sexual contact, compared to 4.3 percent of women. That equates to about 10,500 men and 8,500 women. Yet only 14 percent of assaults reported last year involved male victims. 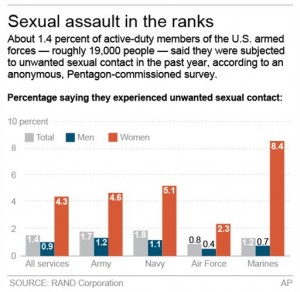 Afraid to be seen as victims or as weak or gay, men in the hyper-masculine military culture often don’t feel comfortable reaching out for help or reporting sexual assaults. Over the past year, though, the services have increased efforts to reach out to male victims, urging them to come forward so they can receive treatment and so officials can go after perpetrators.

The campaign urges troops to intervene in potential assault situations, and not just when the victim is a woman. Troops are pressed to report any assault, even ones prior to their enlistment or that involve civilian attackers.

“The question is, ‘Is our population in the military ready to talk about this?'” says Nate Galbreath, senior executive adviser for the Pentagon’s sexual assault prevention office. “We want to get them there. But it’s going to be bit by bit. Because it’s very, very hard for people to think about someone who is a soldier and is strong” as a victim of sexual assault.

While people may question how a burly infantry officer or Marine could be assaulted, often he is drunk, passed out or asleep.

One Army commander recalled an incident in which one of his soldiers was drunk and woke up to find he was being sexually accosted by another drunken soldier. The two men ended up fighting, and it took months for Army investigators to sort out the situation. In many cases, the commander said, there are conflicting stories, and in the time it takes to finish an investigation victims can spiral out of control as they struggle to deal with the incident.

Investigators eventually solved the case, and both soldiers ended up leaving the Army — one for committing the assault and the other for discipline issues brought on by it. The commander spoke on condition of anonymity because he was not authorized to discuss the case.

According to Hopper and other experts, sexual assault is more about power and control than sex, and has little to do with homosexual behavior. Aggressors almost always identify themselves as heterosexual, said Hopper.

In May, Defense Secretary Chuck Hagel ordered the military services to increase their efforts to encourage men to report assaults. The services already had started putting together training materials aimed at male victims. Videos included scenarios of troops drinking and discussions about when to intervene and what to do if a perpetrator is of higher rank.

The services are learning that they should tailor their approaches differently for men and women, after initially thinking all the training materials should be gender-neutral.

“There are differences that we need to acknowledge and build our programs around,” said Col. Scott Jensen, director of the Marine Corps sexual assault prevention program.

Hopper said he told military officials they also needed to better promote their confidential hotline because many men “are not going to feel safe as the first step going and talking to someone on their base.”

For Nelson, reporting the assault to his Marine commanders was indeed difficult.

“I had to swallow a lot of pride,” he said. “It’s a sense of embarrassment, a sense of fear, and you don’t want to be looked down on by your peers.”

Nelson, who now lives in San Diego, said that talking about the 2010 assault has helped him heal. He has spoken at sexual assault prevention conferences and done some training videos.

“I had never before seen a male survivor speak out,” said Nelson, who said he reported the incident to the police but his attacker was never charged because there was no forensic evidence. “I wanted people to understand it could happen to anyone.”

It seems the military’s new approach is having an effect.

Jill Loftus, director of the Navy’s sexual assault prevention program, said the number of reports filed by male sailors and Marines this year has tripled.