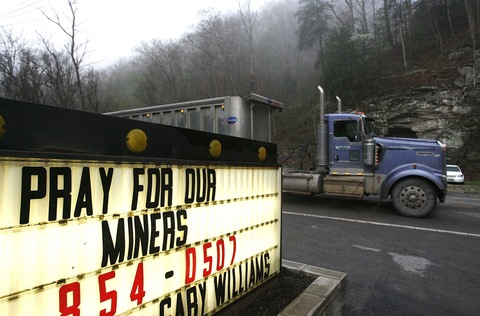 Memorials were held and dozens of coal mines stood idle Tuesday across Appalachia, one year after after a massive explosion ripped through the Upper Big Branch mine near Beckley, W.Va., killing 29 coal miners and injuring two.

It was the worst mining disaster in the United States in 40 years.

One year later, the precise cause of the explosion has yet to be determined and the events and conditions at the mine at the time of the accident are the subject of several ongoing investigations. Investigators agree that the origin of the blast was a longwall face, where the miners were operating large coal-extracting equipment.

The Mine Safety and Health Administration investigation has cited methane gas as the source of the explosion, saying it had mixed with quantities of highly explosive coal dust that had been allowed to accumulate in the mine, setting the stage for a blast of staggering power in an enclosed underground area.

The mine owner, Massey Energy Co., the largest coal producer in Appalachia, has denied allegations that it was lax in servicing ventilation equipment and devices meant to measure methane levels in the mine. Company officials instead point to what they say was a sudden build-up of natural gas in the mine that overwhelmed its safety systems.

An independent investigation conducted by J. Davitt McAteer, a former MSHA head who was appointed by West Virginia’s then-Gov. Joe Manchin, has blamed the company as well as federal and state regulators for not paying enough attention to safety conditions in the mine. McAteer told The Wall Street Journal, “It is without question that the prevention systems failed, and that includes company inspections and government inspections.” That report is to be released within weeks.

Massey officials have also rebutted McAteer’s findings. Company Chairman Bobby Inman called the Upper Big Branch incident a “natural disaster” in an interview on Monday, though he did acknowledge that the company’s safety record was not perfect.

Don Blankenship, CEO of Massey Energy for nearly 30 years, was in charge of
the company at the time of the Upper Big Branch explosion and had been critical of MSHA for imposing what he saw as unnecessary oversight of its operations. “The feeling in the industry is that we’re regulated too much and not too little. Tragedies lead to more regulation.” He left the company in December.

A U.S. Justice Department investigation is also underway. Federal prosecutors filed charges against the mine’s chief of security in February, alleging that he had obstructed the investigation by destroying documents and lying to federal agents. In March, felony charges were also filed against a former mine employee for falsifying a foreman’s license and lying to investigators.

And most recently, a lawsuit filed last week by the families of the deceased miners asks new questions about how two Massey executives handled emergency calls in the disaster’s earliest hours. The executives have refused to testify to investigators, and company officials assert they were working to save injured miners. (NPR has an extensive series of reports on mine safety and the Upper Big Branch explosion).

Ellen Smith, owner and managing editor of Mine Safety and Health News told the NewsHour that refusing to cooperate with investigators is not unusual during the early stages of such cases. “At MSHA hearings the company attorneys will tell people that cooperation is voluntary and you don’t have to talk to an MSHA investigator. But once they go to court they have to answer questions, so the Massey people are not going to have a choice.”

Smith also says it is common for investigations in these cases to take years to be concluded. Some reports have suggested that the Justice Department probe has impeded the pace and completion of MSHA’s investigation. But on Sunday, Assistant Secretary of Labor for Mine Safety and Health Joe Main denied that. He confirmed his agency would hold a public hearing on June 29, as announced last month. But he added that the agency has not yet set a date for the release of its final report.

You can watch a livestream of a Tuesday evening memorial service here.

President Obama released a statement about the anniversary:

On the one-year anniversary of the tragedy at the Upper Big Branch mine, America’s thoughts and prayers are never far from the miners who lost their lives and the loved ones they left behind.

During the past year, my Administration has worked to investigate the cause of the explosion, bring those responsible to justice, and take the steps necessary to prevent a similar tragedy from occurring again. The Department of Labor’s Mine Safety and Health Administration launched a thorough investigation into the cause of the explosion and took aggressive steps to combat mine operators who fail to meet their obligations to provide for the safety and health of their miners. The Justice Department’s investigation into the mine owner’s practices in West Virginia has led, so far, to two criminal indictments.

While these collaborative efforts have changed the way some mine operators do business, we know we can also improve our mine safety laws to better provide for the safety of the men and women who work in America’s mines and for their families’ peace of mind. That’s why the Department of Labor has worked aggressively to institute new measures to help prevent future incidents, including an “impact inspection” process to target mines with persistent violations. That’s why, for the first time in more than thirty years, the Department of Labor successfully argued that a federal court could temporarily close a mine with severe safety problems. And that’s why I continue to support Chairman Harkin and Chairman Kline and their efforts to strengthen America’s mine safety laws. Because we owe the men and women who do this important work and the families who love them our best efforts – not just in memory of the 29 miners who lost their lives in last year’s tragedy – but to ensure that such a tragedy doesn’t happen again.