One year later, two brothers reflect on the marathon bombs that took their right legs

For most of us, life was back to normal within days or weeks of the Boston Marathon bombings. But for hundreds of victims and their families, that will never be true.

Among them are Paul and J.P. Norden, brothers from Stoneham, Mass. who both lost their right leg from the second explosion. The past 12 months have brought disappointment; they’d hoped to be back on the basketball court by now but aren’t quite ready. But there have been triumphs, too. 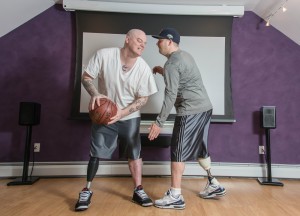 Brothers J.P. and Paul Norden both lost their right leg from the second explosion at the 2013 Boston Marathon. Photo courtesy of Twiceasstrong.com

The two co-wrote a book, “Twice as Strong,” which is due out this month. And they’re about to open a roofing business together. While the Nordens are anxious to move past the events of April, they recently sat down with WGBH host Emily Rooney to share their story.