As the nation continues to confront an epidemic of opioid and prescription painkiller addiction and overdoses, its victims seem to flood emergency rooms. But a study out Monday highlights a surprising group of patients suffering from opioid poisoning at rates that have also marked a dramatic increase: adolescents, children and even toddlers.

Because of what the authors call “the now widespread availability of prescription opioids in the United States” — with retail sales of these medications quadrupling from 1999 to 2010 — they sought to examine for the first time the number of pediatric hospitalizations related to these drugs.

The findings, they say, indicate a need for comprehensive strategies that not only continue to tamp down on opioid prescriptions, but also step up efforts to raise awareness about the packaging and safe storage of these painkillers.

“It’s exposure. Opioids are ubiquitous now,” said Julie Gaither, a postdoctoral fellow at Yale School of Public Health and the study’s lead author. “Enough opioids are prescribed every year to put a bottle of painkillers in every household. They’re everywhere, and kids are getting into them.”

The research underscores the need for doctors to talk to patients about ways to keep the drugs safely, especially if children are in the household.

Published in JAMA Pediatrics, the study analyzed hospitalization data for children between 1997 and 2012, examining more than 13,000 hospital-discharge records for opioid poisonings and using Census data to extrapolate how common these pediatric opioid overdoses were. They used discharge records collected every three years between 1997 and 2012 by the Agency for Healthcare Research and Quality.

One possible limitation: The data stops in 2012 and, therefore, rates may not reflect a dipping or plateauing because of increased awareness of the opioid epidemic. But the findings track with

Overall, researchers found the number of children hospitalized because of opioid poisoning almost doubled during the 16-year period — from about 1.40 per 100,000 kids to 3.71 per 100,000. Much of that is likely an effect of kids getting into their parents’ medicine chests.

Specifically, the study found the rate of toddlers hospitalized more than doubled, going from 0.86 per 100,00 to 2.62 per 100,000. Many experts speculate these very young patients take the drugs because they think they are candy or a treat.

Importantly, the research underscores the need for doctors to talk to patients about ways to keep the drugs safely, especially if children are in the household, Gaither said. 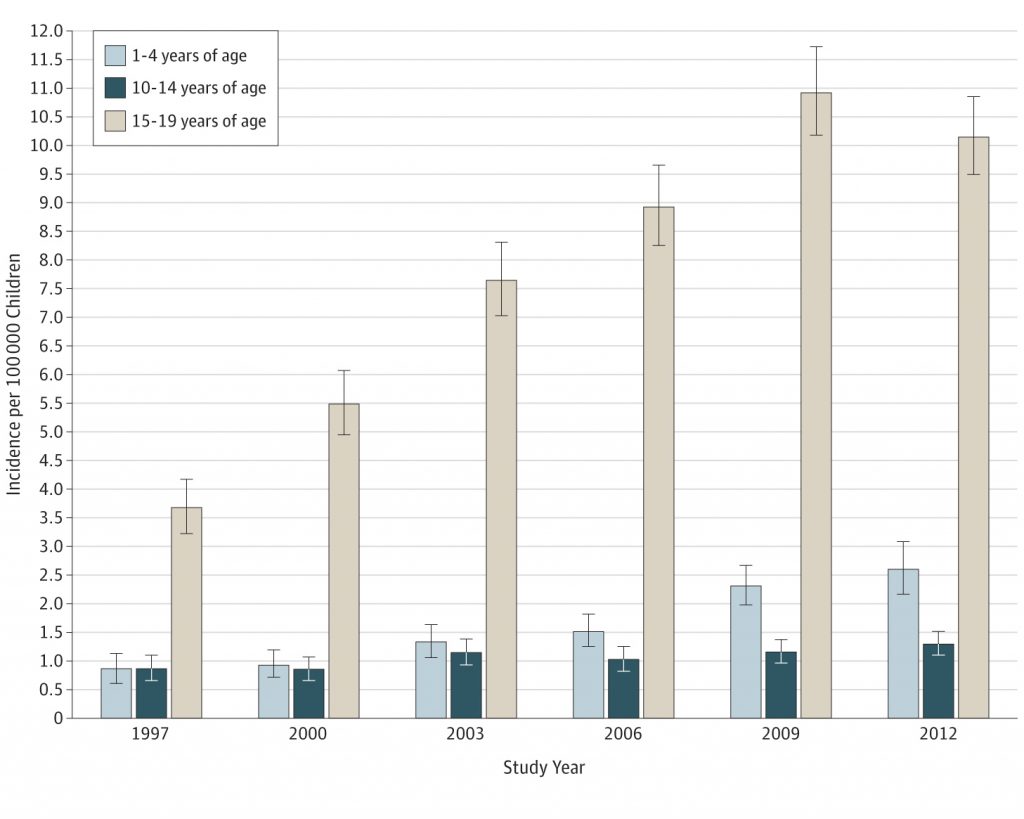 That’s a good idea in theory, said Jonathan Chen, an instructor at Stanford Medical School who has researched the opioid issue. But doctors already face a lengthy list of sensitive subjects they should discuss with patients. And they aren’t always conditioned to consider how a patient’s health patterns may interact with the rest of the family.

“Conceptually, yes, of course that should be part of the conversation,” Chen said. “But there’s a lot of things we should discuss. … When I talk to a patient, I conceptualize them, and I don’t conceptualize who else is in their household as much as I should.” Chen was not involved with the study.

Teenagers are the most likely to be hospitalized for opioid poisoning.

Pediatricians could also play a role, asking parents at well-child and well-baby visits about whether there’s a risk of children being exposed to opioids. But that sort of screening hasn’t traditionally been drilled into doctors the same way as discussing household risks, such as safe storage of cleaning supplies, whether the family has a swimming pool and even whether there are guns in the home.

Doctors also may not be conditioned to considering toddlers as particularly at risk of opioid poisoning.

“This is largely seen as an adolescent problem or an adult problem,” said Sharon Levy, who directs the adolescent substance abuse program at Boston Children’s Hospital and is an associate professor of pediatrics at Harvard Medical School. “But this paper really highlights that this really knows no age boundaries.” Levy was also not involved with the study.

It’s also unclear, Levy said, what the long-term health effects are for children who ingest opioids that weren’t prescribed to them. Younger people in general are more at risk of addiction. And toddlers who take these drugs at adult doses face the danger of serious respiratory complications.

“Opioids cause respiratory suppression,” she said. “If you are a 30-pound person and getting into the medication that was supposed to be for a 150-pound person, it’s going to be a whopping dose for you.”

The findings also suggest doctors should also be more thoughtful in prescribing to children, and especially teenagers. About 1 in 10 high school students reports having taken opioids for a non-medical reason — and close to 40 percent of them say they got those drugs through their own prior prescription. Meanwhile, the

The Centers for Disease Control and Prevention has been pushing doctors to prescribe pills in smaller amounts, so that people don’t end up finding and taking leftovers. That could help. Large prescriptions — coupled with the fact that many people don’t know how to dispose of drugs when they finish them — can make it easier for children and teens to get ahold of them, Gaither said.

That’s an important factor to consider, Chen said. “Leftover pills aren’t used, but do they get returned to the pharmacy, or thrown in the trash? Nope. They’re stored in the medicine cabinet.”

Smaller prescriptions will likely help, but they won’t solve everything, Chen noted. After all, there are situations where a larger opioid dosage makes sense. For instance, someone suffering long-term cancer probably needs a larger amount of heavy duty painkillers, even if he or she has children in the house.

But children must be a part of the conversation, Gaither said.

“We’ve got to pay attention to children and the toll the opioid crisis is taking on them,” she said. “Kids make up about a fourth of the U.S. population, and they’re suffering from this crisis, too.”