Opioid treatment at Rikers Island is a long-standing success, but few jails adopt it

NEW YORK — For Dr. Ross MacDonald, every person who enters New York City’s main jail with an opioid addiction represents an opportunity for treatment, and the possibility of saving a life.

As the medical director of the city’s correctional health program, he ensures that offenders who come in on methadone continue to receive it. And he and his staff try to persuade as many addicted inmates as possible to get started on methadone before they leave the jail.

Rikers Island Correctional Facility has run a model opioid treatment program since 1987, and it has assisted tens of thousands of inmates in maintaining treatment after they return to their communities. Medical researchers have repeatedly found that the jail’s methadone treatment program has resulted in overall health care cost savings, reduced crime and recidivism, reduced HIV and hepatitis C transmission, and better than average rates of recovery from drug use.

But despite Rikers’ well documented success, few U.S. jails and prisons have emulated the program.

The vast majority of correctional facilities reject the use of methadone, used for addiction treatment since 1964 and approved by the U.S. Food and Drug Administration for addiction treatment in 1972, as well as a newer anti-addiction drug called buprenorphine, approved in 2002. That’s despite a history of research showing both medicines are highly effective at keeping people in recovery from opioid addiction with few side effects. Ironically, the subjects of the first major study of methadone’s effectiveness were federal prisoners.

Two-thirds of the nation’s 2.3 million inmates are addicted to drugs or alcohol, compared to 9 percent in the general population, according to a study by the National Center on Addiction and Substance Abuse at Columbia University.

From MacDonald’s perspective, prisons and jails are the perfect place to start addiction treatment. In the general population, only 11 percent of people with a substance use disorder seek treatment at a specialty facility. Opioid addicts who commit crimes to pay for their habit are no different. But once they show up at Rikers, they are cut off from their usual supply and it can be easier to persuade them to get treatment.

Few corrections officials see things the same way. The problem, many say, is that both medications are themselves narcotics, something the criminal justice system works hard to keep out of its facilities. As with any controlled substance, corrections officials are wary of methadone and buprenorphine being diverted to other inmates who are not in drug treatment or leaking out of the prison to illicit drug markets.

There’s another reason for their resistance: a common belief — among the public, as well as treatment providers and criminal justice officials — that methadone merely substitutes one addiction for another and is not a true tool of recovery.

But now that the opioid overdose epidemic, which killed more than 28,000 people in 2014, has become a top political priority, a few correctional authorities are rethinking long-held biases against the oldest and most widely researched anti-addiction medication.

Connecticut tested methadone treatment programs at jails in New Haven and Bridgeport, and is looking to expand them to jails statewide. Rhode Island already offers the other two federally approved addiction medications, methadone and buprenorphine, at its prisons. And it is poised to add Vivitrol, which was federally approved in 2010, this year. Vermont plans to expand a limited correctional methadone program it started 10 years ago. 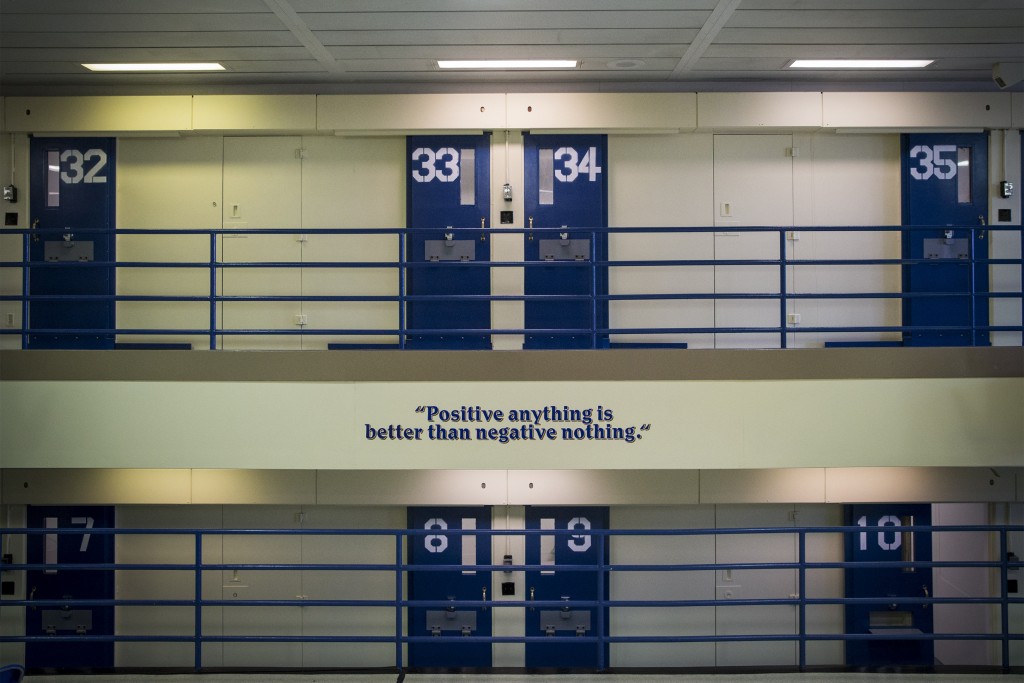 Jail cells are seen in the Enhanced Supervision Housing Unit at the Rikers Island Correctional facility in New York. Photo by Brendan McDermid/Reuters

THE STANDARD OF CARE

Here in New York, where methadone was first researched at The Rockefeller Institute for Medical Research in the 1960s and methadone clinics are more plentiful than Broadway theaters, use of the drug in the city’s jails has never been controversial.

“It’s the standard of care in the community, so why would it not be in a jail setting where the problem of addiction affects a huge percentage of our patients?” MacDonald said.

At Rikers, 75 percent of people who enter the jail are addicted to drugs, with 20 percent addicted to heroin or painkillers. For those who aren’t already on anti-addiction medications when they arrive, the jail’s addiction treatment team offers all three available medications and counseling. Most choose methadone.

But for the vast majority of the nation’s more than 5,000 prisons and jails, use of the relatively cheap medication is a nonstarter. Methadone is offered in correctional institutions in only a few other urban centers, such as Baltimore, Chicago, Philadelphia, San Francisco and Washington, D.C., that have battled heroin addiction for decades, as well as in a handful of smaller jurisdictions.

In all, fewer than 40 correctional facilities are offering methadone to inmates for addiction treatment, according to data from the U.S. Substance Abuse and Mental Health Services Administration and Stateline interviews with addiction and corrections experts. Even fewer facilities are administering buprenorphine, which like methadone blocks the brain’s cravings for drugs and eliminates withdrawal symptoms.

Jails and prisons routinely force inmates who come in on addiction medications to withdraw from them abruptly and remain abstinent while behind bars. Abrupt withdrawal, without tapering off methadone over a period of weeks, is considered inhumane and has resulted in numerous deaths inside prisons and jails. Symptoms include vomiting, diarrhea and insomnia.

Abstinence from all opioids during confinement has also resulted in thousands of overdose deaths when inmates are released. They return to either heroin or prescription drug use after losing their tolerance to the powerful drugs. All three addiction medications protect inmates from overdosing as long as they continue to take them. 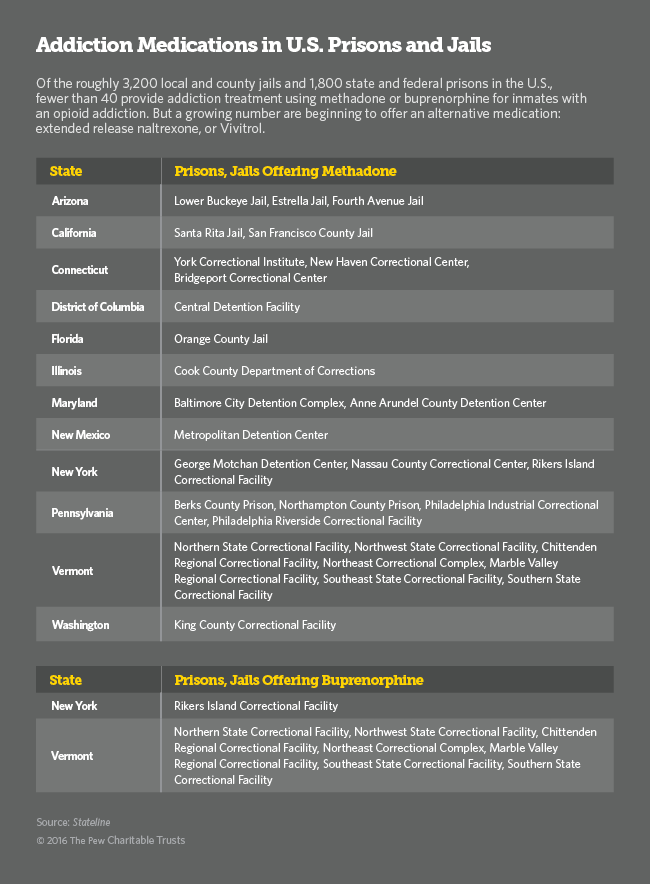 The Obama administration strongly supports the use of evidence-based addiction treatment, including medications. But in the nation’s 102 federal prisons, methadone and buprenorphine are not routinely used to treat opioid addiction. Instead, the Federal Bureau of Prisons is considering the use of Vivitrol in some of its facilities for opioid addicted inmates before release.

“When we have two agents that work, why would you not use them?” said Dr. Kevin Fiscella, an addiction specialist who advises the National Commission on Correctional Health Care, which accredits prison health programs. “I can’t imagine anywhere else in medicine where anyone would use an unproven agent instead of a proven one.”

The Bureau of Prisons chose Vivitrol for re-entry drug treatment because it “provides some pharmacological advantages” over other medicines in reducing the risk of overdose and relapse when inmates return to the community, Justin Long, an agency spokesman, said in an email. More than 100 state prisons and jails have also opted to use Vivitrol in re-entry drug treatment programs in the last four years.

Barnstable County Correctional Facility on Cape Cod, Massachusetts, was among the first. Sheriff James Cummings said buprenorphine was not included in the jail’s drug treatment program because it is a narcotic and therefore considered contraband. “We’re trying to keep it out of our facility.”

Health care workers in prisons and jails who witness inmates withdrawing from methadone, with agonizing symptoms that appear to be the same as heroin withdrawal, understandably develop a negative attitude toward the drug, he said. The only people on methadone they see are those who cycle in and out of prisons and jails after being arrested for drug-related crimes. No wonder they think it doesn’t work, he said.

What they don’t see, Rich said, are the thousands of people who stay in recovery, lead productive lives and don’t get arrested. The same goes for emergency room physicians, who also tend to frown on methadone. They only see people who relapse while in drug treatment, not those who succeed, Rich said.

People who stay in recovery by taking daily doses of methadone or buprenorphine tend to keep their therapy to themselves because of widespread stigma against addiction. If you’re taking methadone, you were once addicted to an illicit drug, which is not something most people want to advertise.

At the sprawling Rikers facility across the East River from La Guardia Airport, about 2,400 inmates were treated with methadone last year, according to New York’s health and hospitals agency, which oversees the city’s public hospitals and corrections health program.

A much smaller number were treated with buprenorphine and a handful received Vivitrol. The number of inmates taking daily doses of methadone while in Rikers, on average for less than 30 days, has declined over the past three years. Fewer people are being incarcerated for drug use and drug-related crimes under a citywide program aimed at diverting drug users to treatment rather than jails, according to Levi Fishman, a spokesman for the state agency.

In a separate effort to reduce overdose deaths, Democratic Mayor Bill de Blasio recently launched a $5.5 million initiative to increase the availability of treatment in the city. And in April, Gov. Andrew Cuomo, a Democrat, became the first governor to seek federal approval to provide Medicaid coverage for inmates 30 days before release, which would boost funding for addiction treatment in the city’s jails.

Although Rikers has done more than any other correctional facility to treat inmates for addiction and help them follow through with treatment when they leave the jail, MacDonald says he sees room for improvement.

Last year, the 13-person addiction treatment staff at Rikers started putting inmates who agreed to quitting drugs on the medication of their choice, a practice considered the gold standard in addiction medicine. MacDonald also wants to do a better job of ensuring that inmates who start on methadone are stabilized at the proper dose before they leave the jail so they are more likely to stay in treatment. And he wants to launch a major, long-term study of Rikers’ drug treatment alumni to see how they fare on the outside.

The last time its drug treatment program was examined, in 2001, the jail was treating 4,000 inmates a year with methadone. The study by the University of Western Michigan found that as many as 80 percent of inmates reported to local clinics to continue their treatment after being released.