Fernandez. Guerrero. Martinez. As the names of the victims in the Orlando shooting were announced, it quickly became clear that the traumatic event had disproportionately affected the city’s Latino community. Nearly all 49 victims killed at the Pulse gay nightclub, were Latino. Of those, 23 were Puerto Rican.

“With Latinos, the fact that my neighbor’s younger brother from another mother, the fact that this happened to them hurts me just as much,” said Nancy Rosado, 59, vice president of the nonprofit group Misión Boricua. “We grieve very passionately. It’s almost like primal scream therapy in some cases,” she said.

As the victims’ families navigate a heavy burden of paperwork and funerals in the aftermath of the June 12 massacre, local Latino leaders are concerned about how the trauma will manifest in the tight-knit Latino community weeks, months, even years from now. 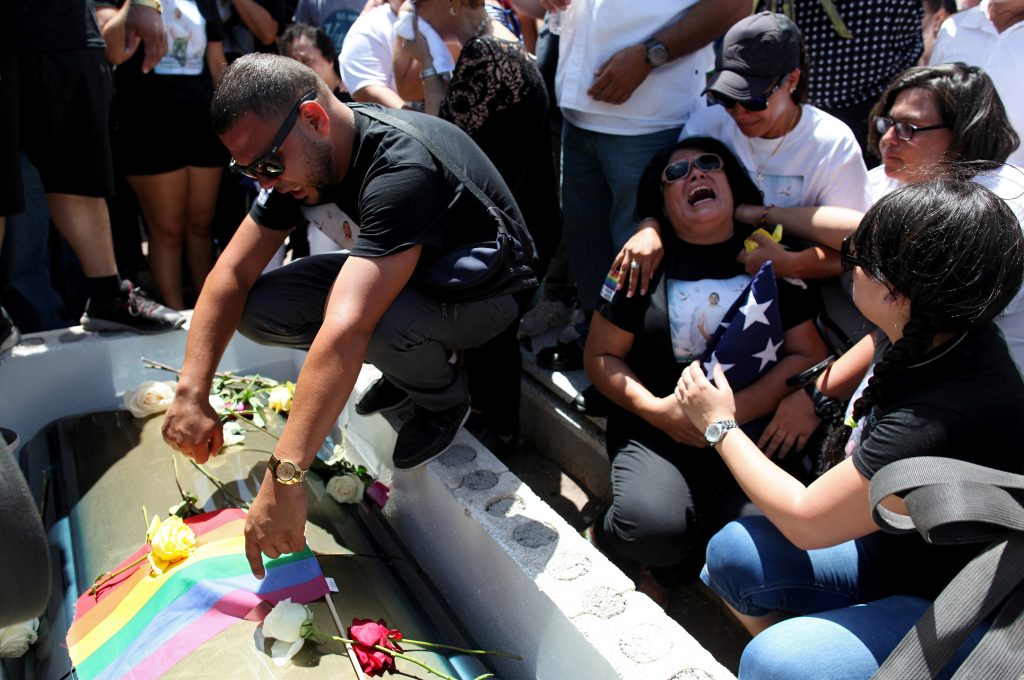 Lucyvette Padro (R) accompanied by family and friends attends the funeral of her son Angel Candelario, one of the victims of the shooting at the Pulse night club in Orlando, at his hometown of Guanica, Puerto Rico. Photo by Alvin Baez/Reuters

Topping the concerns is this: The infrastructure for such long-term treatments in Florida just isn’t there. Florida ranks 49th in the nation for mental health funding, according to the Orlando Sentinel. And disparities in access make it difficult for Latinos to receive whatever treatments do exist in the state.

Zoe Colon, director of the Hispanic Federation’s Florida chapter, said among the barriers to this access is cost. One-third of Latinos in the nation do not have insurance, according to a 2013 Kaiser Family Foundation report. Florida has the third-largest proportion of Latinos who are uninsured, at 36 percent.

Rosado, a 9/11 survivor, knows firsthand how trauma can creep back years later. She was at the foot of the twin towers when a pair of coordinated terrorist attacks brought them down 15 years ago. Rosado had been conducting a support group for police officers nearby when the first plane hit the towers. She ran back to NYPD headquarters to put on her uniform, before heading back down to the site of the terrorist attacks, where she helped move civilians in the danger zone to safety.

“There are times when I’m standing, talking to someone and suddenly the twin towers are in a shot from an old movie,” she said. “The tears start streaming, and I can’t stop them … I didn’t even give a thought; it just happens. These are the little symptoms of PTSD still living with me.” 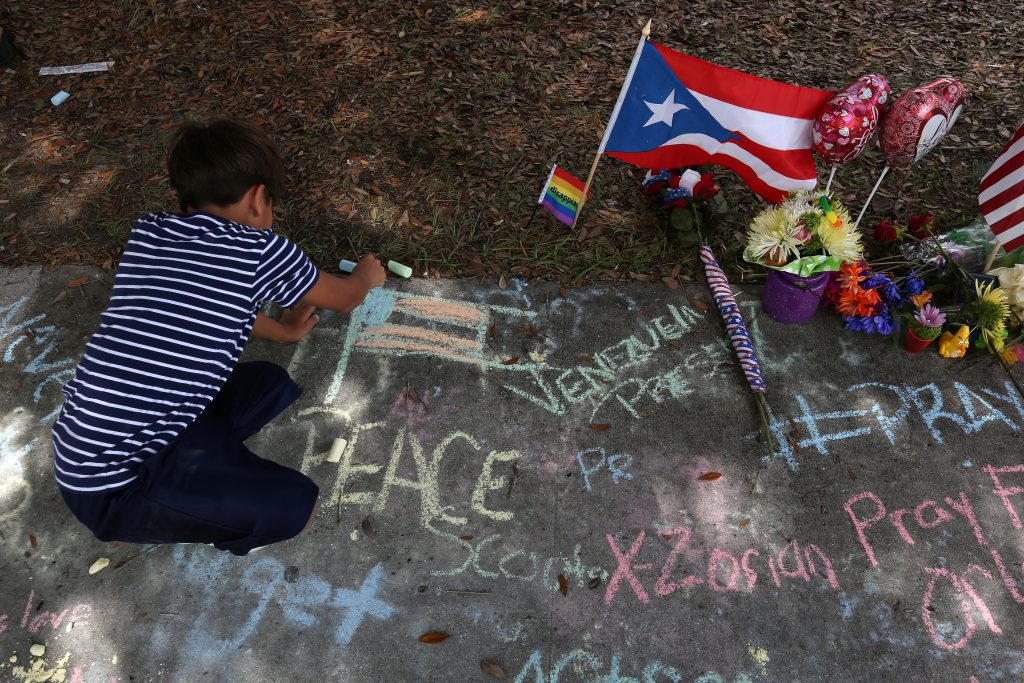 A child draws a U.S. flag on the sidewalk in chalk by a Puerto Rico flag at a makeshift memorial that is across the street from Pulse night club following last week’s shooting in Orlando, Florida. Photo by Carlo Allegri/Reuters

Welch said that proximity to any traumatic event can trigger the onset of mental illness. People who were doing well in recovery begin to backslide. PTSD becomes a real concern. Those in the LGBT community on the cusp of coming out may be more likely to delay the decision.

Kate Mattias, executive director of NAMI Connecticut, said that following the 2012 Newtown shooting, in which a gunman killed 20 children and six adults at Sandy Hook Elementary, there’s was an increase in people needing mental health services.

“Our state mental health agency had a significant presence in Newtown for almost two months after the incident in order to help family members and others, including first responders — many of whom were hard hit by the event,” she said in an email.

As for Orlando, “I do think the mental health system will be taxed significantly into the future,” Mattias said. 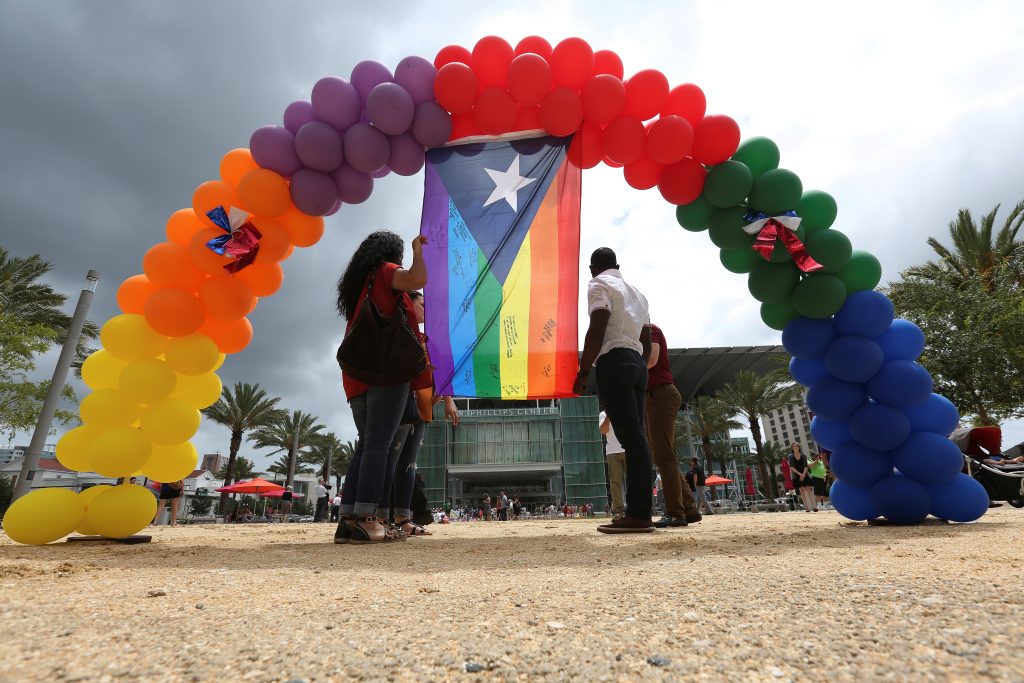 A Puerto Rican flag in rainbow colors and balloons are left at a makeshift memorial for the victims of the Pulse night club shooting in Orlando, Florida. Photo by Carlo Allegri/Reuters

To help chip away at barriers to access in the Latino community, Colon and other Latino leaders formed a group called Somos Orlando, or “We Are Orlando,” within hours of the shooting. The group’s mission: to offer services tailored to the Latino community. The services range from transportation and grief counseling with a bilingual staff to helping families of undocumented victims affected by the shooting.

Counselors in the organization have made home visits to some of the survivors and families of the shooting victims who were afraid or unwilling to leave the house.

“We’ve never been the target or the victims at this scale. We’ve never seen that many Latinos’ faces be victims of this type of crime,” Colon said. “There will be some trauma around that.”

Rosado, whose organization Misión Boricua is a part of Somos Orlando, also said the attack had reverberations back on the island. 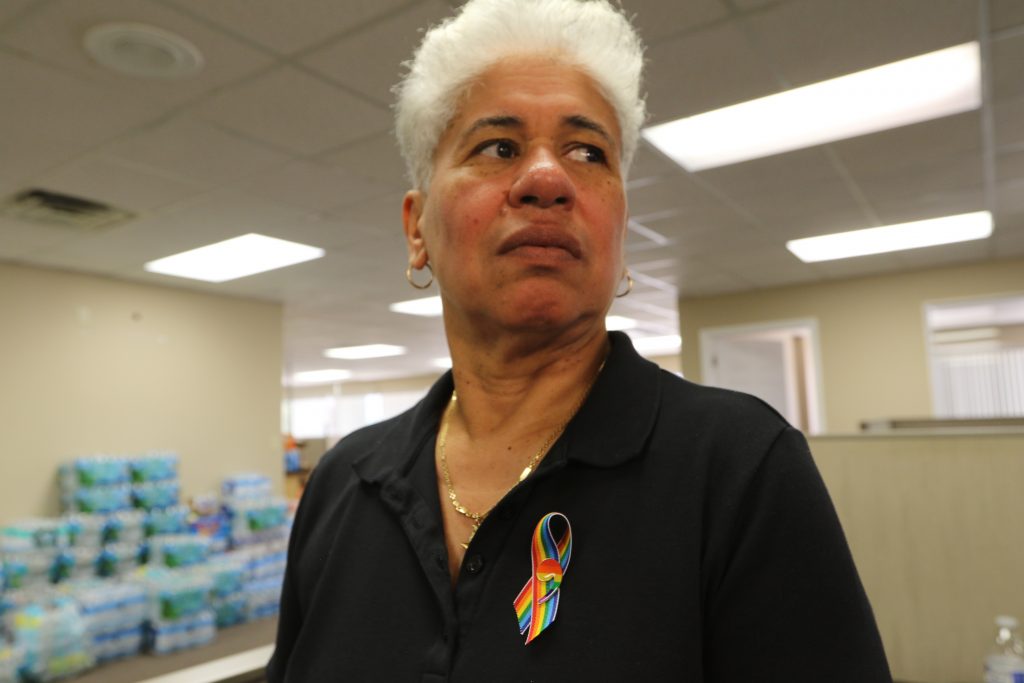 As vice president of Misión Boricua, “Puerto Rican Mission,” Rosado wants to make sure what she calls “cultural competency” isn’t lost in the aftermath of tragedy. Photo by Kenya Downs/PBS NewsHour

A week since the shooting, the number of Latino-led organizations that have joined Somos Orlando’s network ballooned to 40 to help the under-resourced community. The cadre of medical professionals, volunteers and community leaders have based their operations at the Hispanic Family Counseling Center, located in a plaza building in south Orlando.

The owner of the building opened up an entire floor to the center’s efforts, but it remains to be seen whether Somos Orlando receives the necessary private funding to keep operations afloat, long enough to help those who surface over the next month with mental health needs.

And in Florida, the number of Puerto Ricans is rising.

According to the Pew Research Center, Florida’s Puerto Rican population has more than doubled since 2000, topping more than one million in 2015. No doubt the marked uptick in Florida is partly an effect of Puerto Rico’s harsh economic times.

But the Latino community’s growing presence in Orlando hasn’t translated to an increase in what Colon and other Somos Orlando volunteers described as “cultural competency.” “We like to relate to people in our language, we feel more comfortable with people who look like us,” Colon said.

The language barrier alone is enough to make the transfer of information with a doctor difficult. Rosado said she recently heard Antonia C. Novello, former U.S. surgeon general, recount a story of how, after 9/11, a Latino would go to a hospital and say, “Me duele mi alma,” which means, “It hurts me to my soul doing this.”

“The little bit of Spanish that people had translated that to, ‘Oh my God, we’ve got to do an EKG,'” Rosado said.

Rosado said she and other Latina leaders saw a similar disconnect in the initial crisis response in Orlando. In this case, it took the form of a lack of trained interpreters or counselors to help the Latino community cope with the fallout from the shooting.

“Announcements were being made in English, and it was almost an afterthought to do them in Spanish,” she said.

Complicating the outreach is a perception among Latinos that mental health counselors are for “locos,” or crazy people, said Jessica Heredia, a clinical supervisor at the counseling center. Heredia also said she hoped that more survivors and victims’ families are encouraged to seek professionals in the coming weeks to help process their grief. For those who have sought the center’s services, many have expressed a collective shock.

“If you understand the Hispanic culture, we are all family. We are one. And if you hit my neighbor, you’re hurting me too,” Heredia said.

WATCH: What we know one week after the Orlando massacre

Left: Jorge Amaro, an LGBT Latino, leaves a note at the makeshift memorial for the Orlando shooting victims in downtown Orlando. Part of the note read: "What happened was an injustice to your loved one, the entire lesbian, gay, bisexual, transgender, queer community, and a national tragedy." Photo by Joshua Barajas/PBS NewsHour