‘Our people are crying out’: Bishops weigh anti-abuse action despite Vatican delay

BALTIMORE — Several Roman Catholic bishops on Tuesday urged colleagues at their national meeting to take some sort of action on the clergy sex abuse crisis despite a Vatican order to delay voting on key proposals.

Bishop Thomas Paprocki of Springfield, Illinois, suggested a nonbinding vote to convey a sense of the bishops’ aspirations regarding anti-abuse efforts.

“We are not branch managers of the Vatican,” he said. “Our people are crying out for some action.”

“It is shameful that the sin of abuse was hidden and allowed to fester until uncovered by the secular world.”

The three-day assembly opened Monday with a surprise announcement by Cardinal Daniel DiNardo of Galveston-Houston, the president of the U.S. Conference of Catholic Bishops. The Vatican, he said, was ordering the bishops to delay votes on two anti-abuse proposals until after a Vatican-convened global meeting on sex abuse in February.

DiNardo indicated there were two principal reasons for the Vatican order: to ensure that steps taken by the U.S. bishops would be in harmony with steps decided at the February meeting, and to provide more time for vetting aspects of the U.S. proposals that might conflict with church law.

Even without the option of a formal vote this week, the U.S. bishops proceeded with discussion of the two key proposals. One would establish a new code of conduct of individual bishops; the other would create a nine-member special commission, including six lay experts and three members of the clergy, to review complaints against the bishops. 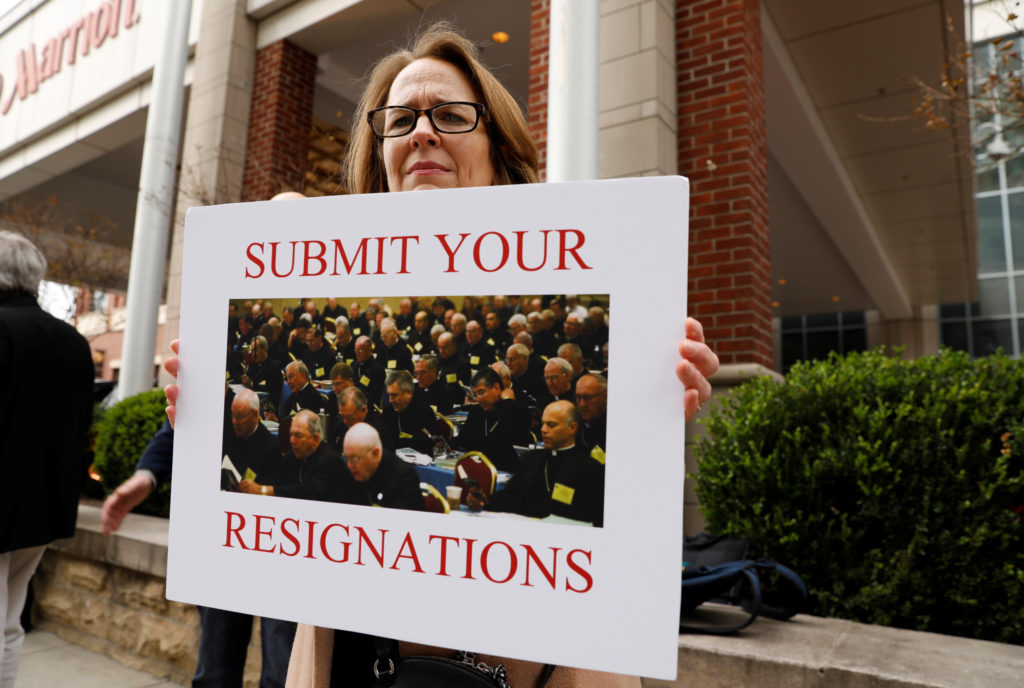 Anne Barrett Doyle, co-director of BishopAccountability.org, holds a sign during the protest outside the venue of the United States Conference of Catholic Bishops (USCCB) general assembly in Baltimore, Maryland. Nov. 12, 2018. REUTERS/Kevin Lamarque

The lay members would include experts in law enforcement, social work and psychology, as well as at least one survivor of clergy abuse, Detroit Archbishop Allen Vigneron said.

However, the bishops are under pressure to take additional steps, as stressed in an address to the assembly Tuesday by Francesco Cesareo, chairman of the National Review Board, which the bishops created in 2002 to monitor the church’s efforts to prevent clergy sex abuse.

“Your response to this crisis has been incomplete,” said Cesareo, calling for more accountability. “It is shameful that the sin of abuse was hidden and allowed to fester until uncovered by the secular world.”

He cited the grand jury report released in August in Pennsylvania. It detailed decades of abuse and cover-up in six dioceses, alleging more than 1,000 children had been abused over the years by about 300 priests. Since then, a federal prosecutor in Philadelphia has begun working on a federal criminal case centered on child exploitation, and attorneys general in at least 11 other states have launched investigations.

“How many souls have been lost because of this crisis?” Cesareo said.

He urged all U.S. bishops to commit to conducting a thorough review of their dioceses’ files, dating to at least 1950, and publicly sharing a list of any clergy who have been credibly accused of sexual abuse of minors or vulnerable adults.

Some bishops had taken this step, he noted, and urged the others to follow suit.

Cesareo also endorsed the bishop conference’s proposal for a thorough investigation of the scandal involving disgraced church leader Theodore McCarrick. Pope Francis removed McCarrick as a cardinal in July after church investigators said an allegation that he groped a teenage altar boy in the 1970s was credible.

Subsequently, several former seminarians and priests reported they too had been abused or harassed by McCarrick as adults, triggering debate over who might have known and covered up McCarrick’s misconduct.

At one point during the morning session, Bishop Shawn McKnight, of Jefferson City, Missouri, expressed dismay that the Vatican “doesn’t trust us” and asked Cesareo what the USCCB should do.

“Decisively act on this issue and continually move it forward,” Cesareo replied. “If that doesn’t happen, I fear for the future of our church.”

A grand jury report released in August in Pennsylvania detailed decades of abuse and cover-up in six dioceses, alleging more than 1,000 children had been abused over the years by about 300 priests.

Among those attending the assembly was James Timlin, a retired Pennsylvania bishop who was faulted by the state grand jury for his handling of clergy sex abuse and barred from representing the diocese in public.

Also on hand was former Bishop Robert Finn, who once led the Diocese of Kansas City-St. Joseph, Missouri, and pleaded guilty to failing to report a suspected priestly child abuser. Pope Francis in 2015 accepted Finn’s resignation, offered under the code of canon law that allows bishops to resign early for illness or some “grave” reason that makes them unfit for office.

Bishop Christopher Coyne of Burlington, Vermont, said the USCCB didn’t have the authority to ban any ordained bishop, active or retired, from attending the assembly.

Outside the conference venue along Baltimore’s waterfront, hundreds of people gathered in a protest rally organized by far-right Catholics, including the group Church Militant. Some held placards denouncing homosexuality in the priesthood, asserting that it was behind clergy sex abuse.

Ulana Campbell, of Wilmington, Delaware, was one of roughly 400 participants at the rally. She said the bishops appeared incapable of stopping clergy sex abuse.

“These bishops are absolutely corrupted by power. I think the true church is going to have to go underground,” Campbell said. “I am an angry Catholic, but I refuse to leave my faith.”

Left: Attendees take part in morning prayers at the start of the second day of the U.S. Conference of Catholic Bishops (USCCB) General Assembly in Baltimore, Maryland, Nov. 13, 2018. Photo by REUTERS/Theresa Keil