In pain and with nowhere to go, homeless patients find respite in a writing group

In Justin Devlin’s stories, his pain is the villain. He is the superhero in a wheelchair, kicking his illness to the curb, sentencing his constant pain to a lifetime behind bars.

Writing “takes me away from the physical pain and the emotional pain. It gives me an escape,” said Devlin, who has a progressive genetic condition that limits his mobility.

Devlin puts his ideas to paper during the weekly meeting of a creative writing group here at the Barbara McInnis House, a medical respite facility that provides care for homeless people who are too sick to live in a shelter, but not sick enough to stay in an expensive hospital bed. Every Monday night, volunteers sit with any resident who wants to write.

It’s a way of giving people with serious health problems and nowhere to go a sense of normalcy.

“If you think of the true meaning of respite, there’s something to being able to have a normal life, whether that’s doing some writing or crafts or bingo,” said Dr. Dave Munson, who works for Boston Health Care for the Homeless, the nonprofit group that runs the McInnis House.

McInnis House is one of roughly 80 medical respite facilities for homeless individuals in the U.S. They’re designed to provide care, but also to connect patients with community and support services to help them transition into more stable housing. Programs like the writing group provide patients with something a little less tangible than medical care — they give them a sense of dignity and humanity, Munson said.

The group also gives staffers insight into the issues their patients face.The average length of stay at McInnis is just under two weeks, but some patients are there for much longer.

“Some of the folks we care for are really reticent to share information about themselves,” said Lily Hayward, who coordinates patient activities. “Having this creative space and outlet for folks is really important for the recovery and stability.” 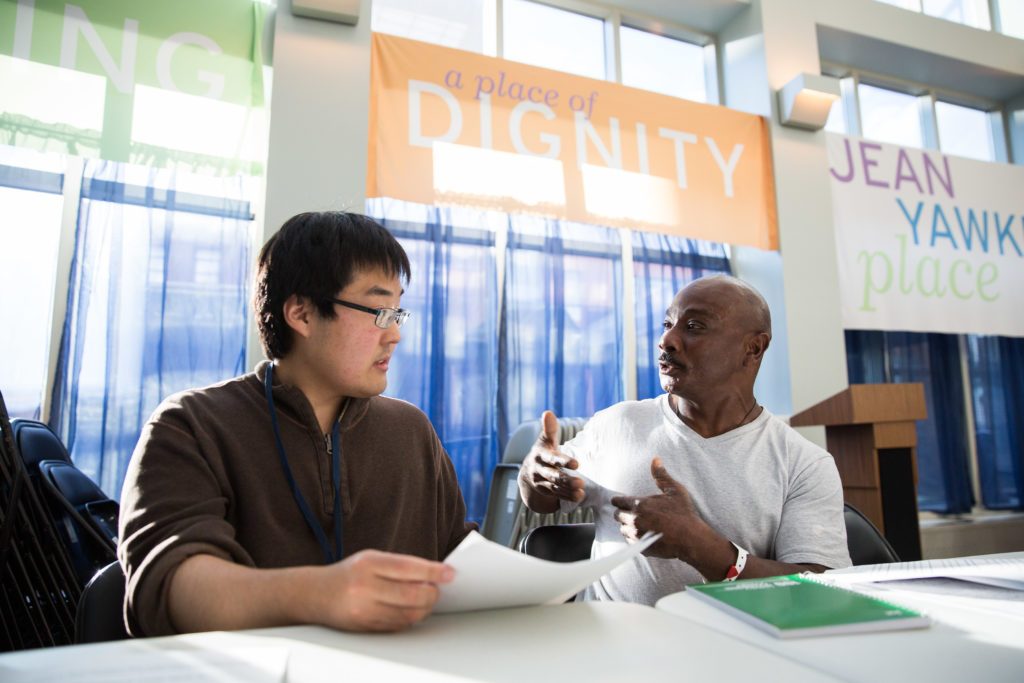 Facilitator John Kwon (left) and participant Kenneth Macks discuss a piece of writing during a creative writing group for the homeless at the Barbara McInnis House on June 26, 2017, in Boston, Massachusetts. Photo by Kayana Szymczak for STAT

And so, before a recent meeting, volunteer John Kwon roamed the halls of the facility to rouse patients from their rooms and bring them to the meeting space, where a couple of Shasta Tiki Punch sodas were laid out for the taking on the table, along with pens, pencils, and a big stack of blank notebooks.

Kwon, who works as a biomedical research associate, and his fellow volunteer, Padraig Carolan, brought writing prompts, too: What makes you smile? What if your mirror started talking to you? Most patients, though, choose to write about their own experiences.

“I find in life the more I live, the more I know how important it is to have a reason for living,” wrote Jesse Maxwell, a patient who popped on a pair of headphones during the session to focus on his piece, titled “Life.”

Residents came and went during the two-hour session. Some saw their friends sitting at the table and wandered over to join. Others lost interest quickly. One patient strolled up an hour into the meeting: “This is the creative writing group, right? Awesome.”

Devlin, who also came to the writing group during a previous stay, scribbled furiously in a notebook for a few minutes. Then he ripped out the page, crumpled it up, and tossed it in the trash. His condition had declined, and while he wanted to put that into words, he couldn’t get it just right.

“My coping skill is writing,” he said.

Devlin used to read and write with his mother, who also had a neurodegenerative condition. When he was little, she’d read him “The Indian in the Cupboard.” By age 12, he started showing signs of the disease. By 26, he was in a wheelchair. Now 32 years old, he said he feels better when he’s reading or writing. He just got a Boston Public Library card. 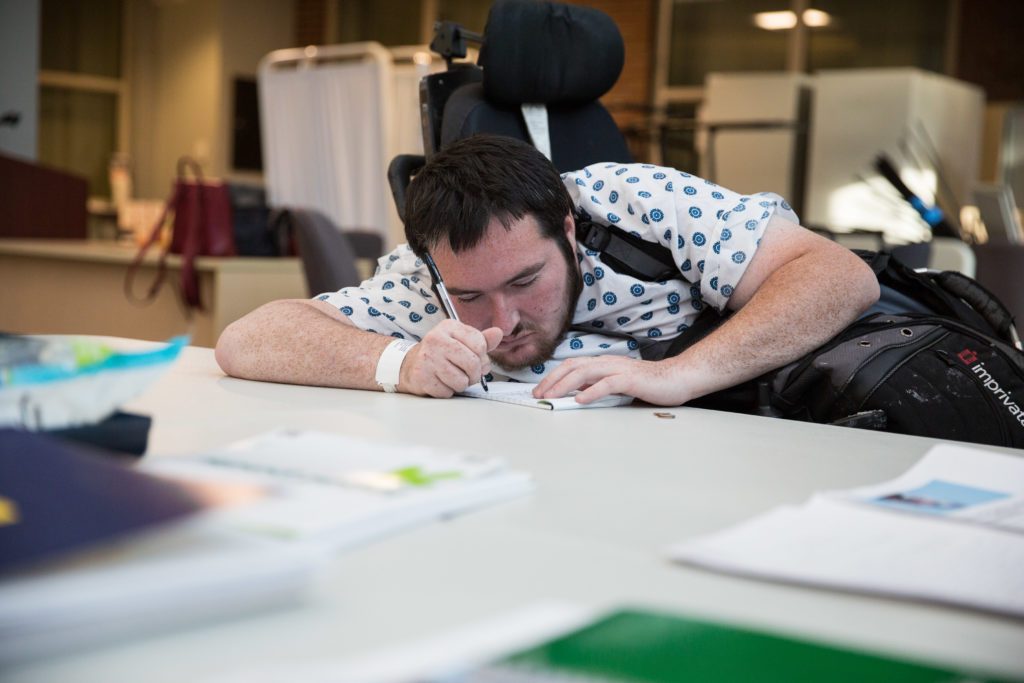 Justin Devlin works on a piece of writing during a creative writing group for the homeless at the Barbara McInnis House on June 26, 2017, in Boston, Massachusetts. Photo by Kayana Szymczak for STAT

Many patients who stop by the group are unsure of their creative skills.

“I’m not a writer,” said Larry Bates, a 63-year-old patient who has been at McInnis House for four months.

“Neither am I,” said Carolan, the volunteer, who works as a research coordinator at Brigham and Women’s Hospital.

So Bates tried his hand at it. He filled up half a page in a fresh notebook — what he called “my story, condensed.”

He read Carolan the first line: “Life’s a funny thing when you stop and think about it. And I’ve been blessed by God throughout my journey.”

READ NEXT: A bold bet in LA: Using health care funds to find housing for the homeless

It has been a rough journey: Bates, who grew up in the Jamaica Plain neighborhood of Boston, got into drugs as an adult and has faced bouts of homelessness. He has been married twice. He’s raised children. He’s lived in Virginia, in Connecticut, and now is back in his hometown.

Bates, who has congestive heart failure and was recently diagnosed with prostate cancer, had nowhere else to go when he left the emergency room after a recent medical scare. He ended up at McInnis House. Reading the Bible and writing, he said, have given him a way to be something other than a “professional patient.”

“There’s a lot of story in your life,” Carolan remarked. Bates agreed — there was enough to write a whole novel, he said. Carolan assured him that wouldn’t be a problem:

“We’ll have more notebooks ready for you.”

This article is reproduced with permission from STAT. It was first published on July 7, 2017. Find the original story here.

Left: Larry Bates works on a piece of writing during a creative writing group for the homeless at the Barbara McInnis House on June 26, 2017, in Boston, Massachusetts. Photo by Kayana Szymczak/STAT.