Parkland, race and the gun violence that goes overlooked

Anika Simpson was chopping dinner three years ago when her 8-year-old daughter asked whether it was true: Was a 12-year-old boy really shot to death because he was playing with a fake gun?

“I was chopping and thinking, ‘How am I going to navigate this conversation without rupturing that protective bubble?’ I want to maintain joy and not introduce fear,” Simpson said.

As survivors of a shooting in Parkland, Florida, amass international attention for a movement to reform gun laws, many white parents and guardians are figuring out how to talk to their children about gun violence for the first time. But Simpson and many others within black communities are reckoning with how to embrace that movement while also addressing truths about their safety, perceptions of black lives and death.

Her daughter Basil Mann, now 11 and in fifth grade, gave a poignant speech at Inspired Teaching Public Charter School in Washington, D.C., during their walkout in solidarity on Wednesday.

She asked her classmates — even the older ones in sixth and seventh grade, which made her nervous — “When black youth were asking for a donation, where was Oprah’s money or where was George Clooney’s?”

Both celebrities have announced donations for $500,000 for Parkland survivors organizing the March for Our Lives, adding to more than $3 million raised on GoFundMe.

“The thing that bugs me the most is that black people have been protesting against gun violence for years and people have just pushed them aside,” Mann said. “Then, when a shooting happens in this mostly white school and the kids start to protest, people start to listen, start giving them money, start saying, ‘Oh, this really is a problem.’”

Simpson was recording with her phone, feeling a mix of pride and fear that her daughter could be exposed to vitriol. But relief came to both of them when Mann’s peers told her she did a good job.

“I’ll tell you, Basil’s presentation was the only presentation that went in the direction that hers did,” Deborah Williams, the school’s founding executive director, told the NewsHour Weekend. “There was a lot of positive responses… Social justice is an ongoing part of our curriculum.”

Tamir Rice, who drew Mann’s attention three years ago, was among 7,735 black people to die from a firearm in 2014, according to the Centers for Disease Control and Prevention. A police officer responding to a call about a “guy with a pistol” in a Cleveland park shot Rice, who at that point had an airsoft pellet gun in his waistband, within seconds of exiting the car.

At that point, the Black Lives Matter movement had begun to rally support along with several other black youth activist organizations — and much like the Parkland survivors, drew media attention.

But their activism against gun violence at the hands of police was met with the ire of law enforcement lobbies. Policymakers wrote dozens of so-called “Blue Lives Matter” bills, proposing that police could be illegally discriminated against like people of color or other marginalized communities. Oprah Winfrey told People magazine that the movement needed leadership. And President Donald Trump condemned National Football League players who took a knee in solidarity with Black Lives Matter last year.

While they have been attacked by politicians and online critics, students from Parkland were invited to a town hall with U.S. senators and a spokesperson from the National Rifle Association, one of the most influential lobbies in the country. State and federal bills on school safety have been introduced, and some passed – though students do not agree with many of them.

And the March for Our Lives, which organizers project could lure at least 500,000 people to D.C. and has sister marches planned for all over the country, has raised more than $5 million.

Emma González, a Parkland survivor often seen as a leader of the movement, addressed that contradiction on Twitter.

(1/4)Yesterday, the members of @AMarch4OurLives got to meet up with some of the most wonderful and most strong spoken students of Chicago. "Florida's safest city" and one of the cities in America most affected by gun violence came together to share stories, ideologies, and pizza. pic.twitter.com/3SIDgvAnDM

After meeting with students in Chicago about gun violence, she tweeted, “Those who face gun violence on a level that we have only just glimpsed from our gated communities have never had their voices heard in their entire lives the way that we have in these few weeks alone. Since we all share in feeling this pain and know all too well how it.”

Activists interviewed for this article said they support the movement that Parkland survivors have created.

“I think any tragedy, anything that is so traumatic for a community, is worth organizing around,” said Dante Barry, who founded the human rights organization Million Hoodies Movement for Justice.

But many recent efforts at limiting gun violence, including a proposed federal bill that would fund more security at schools, are geared toward white people and their ideas of what safety means, Barry said.

There have been 1,624 victims of mass shootings in roughly the last five years, according to the Gun Violence Archive. Yet 38,658 people died from guns in 2016 alone, according to the Centers for Disease Control and Prevention.

And mass shootings more often affect white people. They are most often carried out by middle class white men in suburban areas who have purchased guns legally or taken them from family members, according to the American Psychological Association. Their victims are most often white, too. 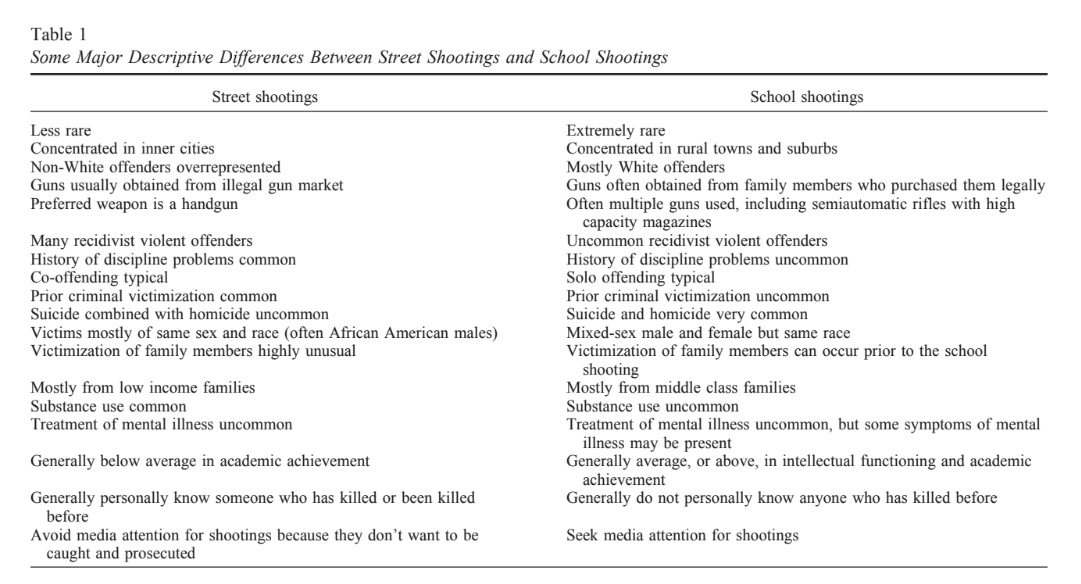 Black youth are more likely exposed to gun violence on the streets, which is more common, according to the APA. The association says street shootings are most often over turf wars and retaliation in low-income families, that substance abuse is often a factor and the shooter is more likely to have obtained the gun illegally.

Brooks said that when he asks the kids he works with to close their eyes and think about what makes them feel safe, then asks them to raise their hands if police come to mind, nobody does.

Lawmakers who are focusing on more security can feel like a direct threat to black youth, he said. And it’s difficult to compare the attention the March for Our Lives is getting with some of the campaigns he has built.

“We’re glad that [Parkland survivors] are taking action. We should always be on the street,” he said. “But at the same time, it’s representative of being told by this country that you’re not enough, that you’re not worthy.”

Kanene Holder, the Art Department chair at Broome Academy in Brooklyn, who teaches youth of color about media literacy, said while her students were excited about the walkout and about the march, they don’t all feel the movement speaks to them.

“They recognize and realize that most of the shooters are white men, yet [white men] are not targeted or stereotyped,” Holder said. “They also have a fully loaded gun and somehow they’re subdued versus a black person, who can literally be walking in the street and shot in the back … these are harsh realities and bitter pills to swallow.”

These issues of safety and law enforcement are difficult to teach young people, Simpson says.

“Some parents may say, ‘If you’re in trouble, run to the police,’” she said. “I don’t have luxury of telling my kids that.”

She has been teaching Mann to act like a “city mouse” when she is walking around Washington, D.C., explaining to her how to be quaint and aware while instilling tactics to avoid being perceived as a criminal, like “Don’t go to CVS after school.”

Paul John, a recruiter for Million Hoodies, said he supports the goals outlined by the March for Our Lives: to ban the sale of assault rifles, to prohibit the sale of high-capacity magazines and also perform more rigorous background checks. But John is also focusing on where to draw attention afterward.

“When people are moved to action, you want to make sure you keep them active moving forward,” he said. “And part of the way you keep them moving forward is by showing them what they haven’t been seeing, about what’s happening with gun violence in the country, maybe in the next town over, maybe even a few blocks away.”