Why would someone eat 50 hot dogs?

Juliet Lee once ate 160 shrimp wontons in six minutes. Another time, she scarfed down 51 burgers in eight minutes. She’s eaten enough hot dogs in one sitting to fill a wheelbarrow. And she’s done it all in the name of sport.

Lee is an accomplished competitive eater, or gurgitator, as it’s known in the sport. She is currently ranked eighth in the world, according to competitive eating’s governing body Major League Eating, and has turned a life of second and third helpings into a sort of celebrity, competing before crowds from Brooklyn to Bangkok. She is capable of jaw-dropping feats of ingestion, ranging from gobbling up 22 dozen clams in six minutes to wolfing down 13.23 pounds of cranberry sauce in eight minutes. In one memorable competition, she ate 3.5 pounds of “Rocky Mountain Oysters,” also known as fried bull testicles.

“Originally, I was excited when someone told me I was going to be eating oysters in a contest in Colorado…,” Lee said, in slightly broken English. She immigrated to the U.S. from China 25 years ago. Recalling the memory from a dimly lit corner of a Mexican restaurant just outside Washington D.C., the 46-year-old former chemistry professor-turned-hair salon owner laughed. “But then I read what Rocky Mountain oysters are and I was like, ‘Oh no!’”

The history of competitive eating dates back to the 13th century. According to Norse myths, the god Loki and his servant participated in an eating competition that was only won after the servant ate his plate. Roman emperor Vitellius once served more than 7,000 birds at a feast. American railroad tycoon “Diamond” Jim Brady was known for regularly chasing a typical dinner of seven lobsters with two pounds of bonbons for dessert. And then there was Eddie “Bozo” Miller, considered by some to be the greatest eater ever. According to his obituary in the Wall Street Journal, in his heyday, Miller existed on a daily diet of 25,000 calories, and in 1963, reportedly ate 27 two-pound chickens in one sitting. Organized competitive eating, however, is a relatively new phenomenon. 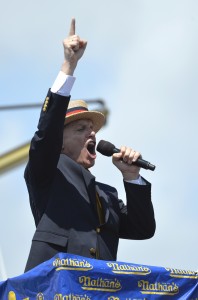 Shea claims to have attracted more attention to the sport since he and his brother Richard assumed leadership of the organization in 1991. The famous Coney Island Nathan’s Hot Dog Eating Contest now draws international television coverage and packs some 50,000 spectators onto the boardwalk annually, up from the “40 people that would just kind of stand around watching” and “eight or nine eaters randomly pulled off the boardwalk” that populated the contest in its early days, according to Shea.

Shea credits the massive surge in popularity to a few random landmark occurrences. First, the “discovery” of the famed mustard yellow championship belt awarded to the Nathan’s contest winner. Detractors of competitive eating view the belt as a tacky item that celebrates abhorrent displays of overeating, created by Mr. Shea to help drum up interest in Major League Eating. But Shea’s explanation of the belt’s origin story traces decades into the past and is far more mythical.

The belt, Shea said, went missing in Japan some time during the 1980’s after years of Japanese domination at the Coney Island contest. Then, in 1993, after former professional eater Mike “The Scholar” DeVito defeated a diminutive Japanese lady named Orio Ito in a 30-minute hot dog-eating contest held underneath the Brooklyn Bridge, the crown jewel of competitive eating was returned home.

“I received an unmarked package from Japan a couple weeks after Mike won the contest,” Shea said. “And inside was the championship belt. After its return, Japan started sending eaters here every year to try to recapture it, so in a way it became this weird, self-fulfilling prophecy.”

This is how George Shea talks. Conversations for him are more about painting a picture than conveying a point. Each facet of competitive eating seems to have its own golden, fabled backstory. For example, the “barker,” which Shea considers the driving force behind the Nathan’s contest. In the early 20th century, barkers would shout at passersby from boardwalks and circuses, extolling the magnificence of their various attractions to increase ticket sales. Shea models his persona after these showmen, right down to the red ribbon straw hat he always wears.

“For me, the intrigue came out of the Coney Island experience, where anything you say is true and anything you do is real,” Shea said. “We created a league, and then there was a league. We said there was a rivalry with Japan, and there was. It was that simple.”

That rivalry has perhaps brought competitive eating more publicity than any other factor, due in large part to Takeru Kobayashi, a Japanese eater who famously ate 50 hot dogs in 12 minutes in 2001. Kobayashi doubled the previous world record and brought a new level of intrigue to Major League Eating. Kobayashi went on to win six straight Nathan’s contests, setting multiple world records and capturing national attention. Yet despite his international celebrity, Kobayashi and Major League Eating are no longer on speaking terms, the result of a lengthy and harsh contract dispute. In short, Shea wants Mr. Kobayashi to sign an exclusivity contract to compete only in Major League Eating-sanctioned eating events, and Kobayashi refuses to do so. The arrangement would constitute a “slave contract,” Kobayashi contends. The dispute culminated in an odd scene in 2010 when Kobayashi was arrested and removed from the Coney Island contest after attempting to rush the stage after the competition.

One of the reasons for the rise in popularity of Major League Eating is the cast of colorful competitors who populate its league ranks — each with a biography more far-fetched than the last. Consider, for example, a man by the name of Jason “Crazy Legs” Conti. 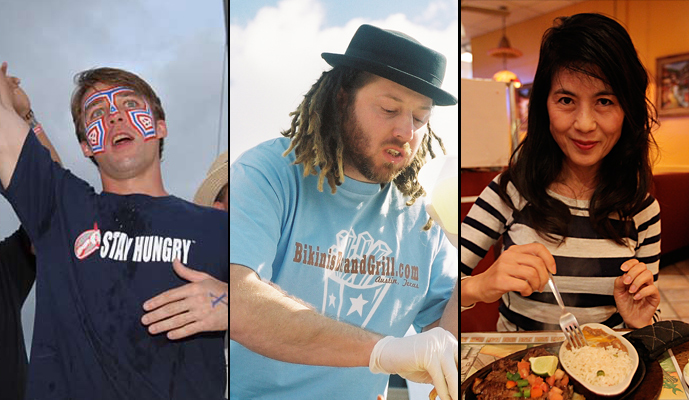 Conti is an eater with a background unlike any other. The 41-year-old Belmont, Mass., native graduated from John Hopkins University in 1993 as a three-sport athlete and went on to work an array of post-graduation jobs including bouncing at bars, window washing, donating sperm and posing as a nude model for art classes. He got his start in competitive eating when he traveled to New Orleans to support the New England Patriots in the 2002 Super Bowl. Unable to afford tickets to the game, Conti found himself at Felix’s Oyster Bar in the French Quarter, admiring one man’s ability to quickly shuck oysters, when an idea occurred to him.

“Having always been a big eater and competitor, I decided to ask what the most oysters anyone ever shucked was,” Conti said. “They told me that across the street, at Acme Oyster House, a man had eaten 33 dozen oysters. So I walked into Acme, had a seat and set the world record by downing 34 dozen oysters.”

Conti, whose dreadlock-and-top-hat appearance most closely recalls that of a voodoo doctor, became an instant crowd favorite for his eccentric personality. A world record holder in the sweet corn and green beans categories, the former collegiate athlete’s devotion to Major League Eating and outspoken ways captivates followers. For example, when asked whether competitive eating should really be considered a sport:

“Of course it’s a sport,” Conti said. “If you look back to the earliest Olympics, the marathoners were allowed to eat and drink whatever they wanted during the contest, and for some reason, down the line, we stopped celebrating the food and started celebrating the running, which is a shame, because the food is what fuels you. I mean we’re watching the biathlon in the winter Olympics now. You tell me, in what occasion in your life are you ever going to have to cross-country ski and shoot a gun?”

Conti believes competitive eating, too, deserves its place as an Olympic sport. After all, he says, the training is just as rigorous.

“I used to eat six hot dogs in a row as fast as I could to get ready for Nathan’s,” he said. “I know guys who would swallow ice cubes to strengthen their throats.”

The diversity of training methods is seemingly endless. Retired eater Ed “Cooki” Jarvis would consume entire heads of boiled cabbage and drink as much as two gallons of water a day prior to competitions. Former chicken-wing champion-turned-cocaine-distribution convict Bill “El Wingador” Simmons gnawed on bags of rawhide bones meant for German Shepherds to strengthen his jaw. Yet despite the caloric requirements, competitive eaters are in surprisingly good shape.

“Furious Pete” Czerwinski, a Canadian competitive eater who holds the world record for eating a whole raw onion in 45.53 seconds, works double-time as a bodybuilder. Before leaving Major League Eating, Kobayashi used to famously flash his washboard abs before the Nathan’s contest every year. And Miki Sudo, the world’s fourth-ranked eater, looks more fit for walking a runway than inhaling 8 pounds of Kimchi in six minutes.

Then there are the techniques used. There’s the “reverse-fold” used for eating pizza, which requires folding the slice so cheese is touching both the roof and tongue of one’s mouth and “chipmunking” — the act of stuffing one’s cheeks full of food before time is called.

There are also the multitude of dangers eaters must avoid in competition, ranging from choking to suffering the “Roman method incident” (vomiting). The exhaustive training combined with the daunting prospect of having to consume 20,000 calories in a 10-minute interval and the hellish indigestion that must ensue, begs the question, why would anyone ever want to become a competitive eater?

That answer is far from clear-cut.

“Well, for one thing you get to live a bit of a rock-and-roll lifestyle,” Conti said. “Traveling, partying, groupies; it all comes with the territory.”

Wait, there are competitive eating groupies?

“Oh yeah,” Conti said. “It helps when you’re on television in a bar in a tiny four-antenna town.” Wisconsin, for example, is a great place for groupies, he said.

For others, the attraction to the sport is more simple.

“I wish I could say it was for the money or the fame,” says Tim “Eater X” Janus. “But in reality this doesn’t pay that well, and I’m far from an international celebrity. Any money made while touring is simply money I’m going to use for retirement.”

Janus is the third-ranked eater in the world, a man who once ate 11.81 pounds of burritos in 10 minutes who paints his face before every contest in homage to his favorite childhood wrestler The Ultimate Warrior.

“Sure I don’t like how I feel after eating all that food, but competitive eating has enabled me to do things and go places I would have never been able to do otherwise,” he said.

Conti shares this sentiment. “I’ve gotten to perform in front of troops stationed overseas and bring some amount of happiness to them,” he said. “I’ve seen the top 32 competitive eaters in the world shut down the all-you-can-eat buffet at the Luxor in Vegas. I’ve made a lifetime of memories through all of this. Auntie Mame once said, ‘Life is a banquet and most poor fools are starving to death.’ Well, if you’re a competitive eater that is far from the truth.”

Back at the Mexican restaurant, it’s gotten late. The table is littered with crackling fajitas and perspiring mugs of light beer. Juliet Lee has finished her food, and she reflects on how competitive eating has changed her life. As a child in China, her 20 cousins teased her for her insatiable appetite, she recalls. But that changed when she moved to the U.S.

“I was always very embarrassed by my appetite until I moved here,” she said. “Here, people like me. Now, I feel proud of how much I can eat.”

Left: A mass of hot dogs grace the table at Nathan's Hot Dog Eating Contest in 2007. Photo by Bobby Bank/WireImage.