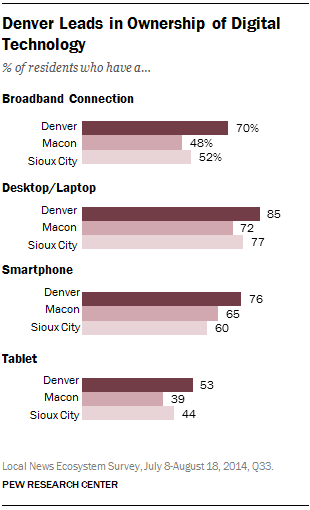 Pew found that nearly nine in 10 residents closely follow local news. Amy Mitchell, Pew’s Director of Journalism Research, said the findings showed that “first and foremost, the degree to which you have local news is very important to people’s lives in all three of these cities.”

But the way in which people retrieved that content varied, particularly when it came to how they used the Internet.

Though the majority of residents in each city have Internet access, broadband access at home differed. Macon’s overall broadband availability is lower than in Denver and Sioux City. But Macon residents’ use of social media to access local news is greater. 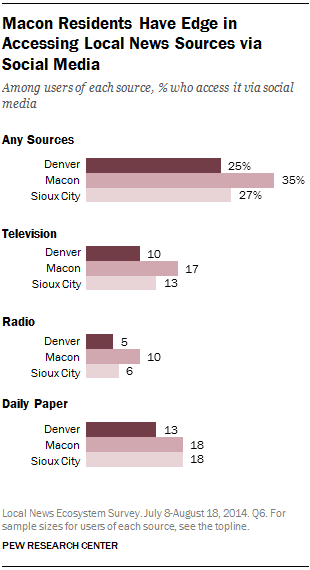 “What you see if you connect these dots, is that in an environment like Macon where there is less broadband in the home and less ownership of computers and laptops, there’s more of a move towards social media,” said Mitchell.

These findings in Denver, Sioux City and Macon mirror trends in other parts of the country when it comes to how people are using technology.

“Part of what’s happened in other parts of the world, in rural parts of the county, is that mobile has opened up an opportunity to connect digitally.”

It’s a workaround — or what Mitchell calls “another avenue” — to getting the news.

Left: How do you get your local news? Photo by Allison Joyce/Getty Images.