Photos: Inside an Arizona immigration court

As part of an ongoing reporting trip, the PBS NewsHour’s Joshua Barajas witnessed court proceedings on Monday of Operation Streamline, a federal program that holds hearings for unauthorized immigrants in groups. Recorders and cameras are not allowed in the room, so depictions like these 2014 sketches of Operation Streamline are one way to illustrate what’s taking place. Read Barajas’ dispatch from Tucson, Arizona:

Shackled at the hands and feet, at least 60 migrants sit in rows before a judge at a Tucson federal district courthouse. U.S. Magistrate Judge Eric Markovich asks each migrant a series of questions. All the migrants — mostly men on Monday, with the exception of four women — wear headsets to hear an interpreter.

“Sir, are you thinking clearly today in pleading guilty voluntarily and of your own free will?” the judge asks Daniel Alexi Gonzalez-Rodriguez. He is the first defendant of the day to face a criminal conviction and prison time for illegally entering the U.S.

“Si,” he says softly into a microphone. 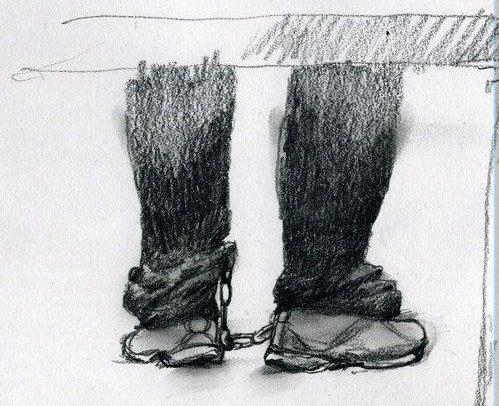 Operation Streamline was first set up in Tucson in 2008 as a way to quickly process deportation cases in large numbers. Every weekday, dozens of migrants caught crossing the border are processed in an afternoon’s time. One magistrate judge once told the New York Times that his record was handing out sentences for 70 migrants in just 30 minutes.

Deportation cases in civil immigration courts are considered administrative violations. Operation Streamline, however, treats defendants as criminals. One question the NewsHour will answer is whether the courts and critics of the system think these type of proceedings will continue and even strengthen under a Trump administration.

Most of the cases on Monday are decided in less than a minute for each migrant. All of the immigrants that afternoon pleaded guilty because, I’m told, that would mean lesser charges. The criminal convictions also may mean any future chance for a path to citizenship disappears. The time spent in federal prison, before being deported back to Mexico, ranges from 30 days to six months.

The expedited proceedings are meant to deter people from re-entering the country, but there are many repeat offenders. Family located in the U.S. is consistently cited as a reason for immigrants to try to cross the border again.

The judge finishes his line of questioning by asking Gonzalez-Rodriguez if he pleaded guilty or not guilty, as he will do with the other 59 or so immigrants in the room.

Gonzalez-Rodriguez doesn’t immediately respond. It’s unclear if he misunderstood the question or paused to ponder the inquiry. His lawyer checks on his client.

But just before Gonzalez-Rodriguez’s extended silence threatens to extend his sentencing, he speaks up.

“Culpable,” he says, which is “guilty” in Spanish.

See more of the PBS NewsHour’s dispatches from Arizona: