After spending Tuesday morning laying out water for migrants in the Sonoran Desert in Arizona, Alvaro Enciso turns to me and says, “This beautiful desert has a secret.”

Every week, Enciso makes four crosses to represent a fallen migrant. Using data provided by the Pima County Medical Examiner’s office and the help of handheld GPS devices, Enciso and a handful of other volunteers head into the desert to then approximately mark the spot where each migrant’s remains were found.

The deaths are represented by the red dots on the group’s maps.

“It’s the end of the American dream,” Enciso says.

Enciso, 71, is part of the Tucson Samaritans, a faith-based group of volunteers who offer humanitarian aid — jugs of water, food and blankets in the winter — to migrants making the deadly journey north through the desert.

There has been a drop in Border Patrol apprehensions and in the wave of migrants who cross the Southwest border, but those who perish in the desert continues to climb. Enciso says the remains of around 3,000 migrants have been found by immigration enforcers or ranchers since 1999. This doesn’t account for those still missing, he says.

“It’s like a commercial airliner going down every year, and no one knows about it,” Ron Kovatch, 63, another longtime volunteer, says. 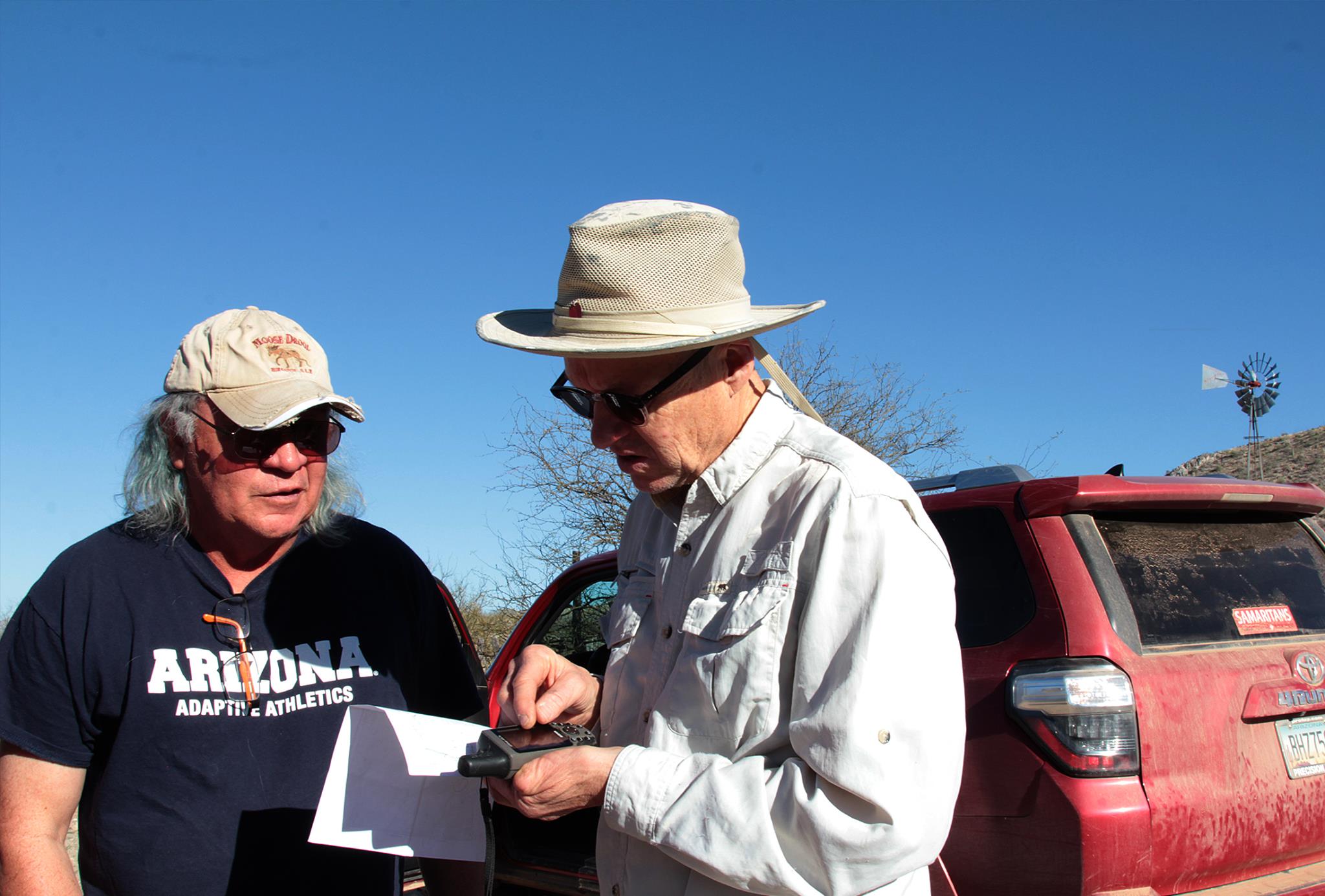 For these weekly hikes, Enciso also handcrafts crosses that are planted out in the desert. They’re decorated with what Enciso calls “migrant-handled” items, including tuna fish cans, discarded license plates, colorful paper left behind.

He started making crosses four years ago. He’s made around 400 crosses since then. Enciso says the crosses take the abstractions of the red dots on the map and “bring it out here.”

The first cross of the day is bright purple. A red dot is affixed at the top, and at the center is a scuffed-up lid. Green slips of paper, which was found at a soup kitchen for recently deported migrants in Nogales, Sonora, Mexico, complete the decoration.

After Kovatch consults GPS to pinpoint an approximate location of the first red dot, he digs a hole in the ground with a shovel that Enciso was using as a walking stick. Meanwhile, Enciso rattles off the information known about the dead migrant for the other four volunteers to hear. Normally, he reads out the person’s name, age, year remains were found and cause of death.

But there’s no name available.

Skeletal remains were found in this spot on Nov. 14, 2016, Enciso says. Nearby, a small piece of black plastic is found, possibly used for sleeping, Kovatch says.

When Kovatch is done shoveling, the hole is several inches deep. 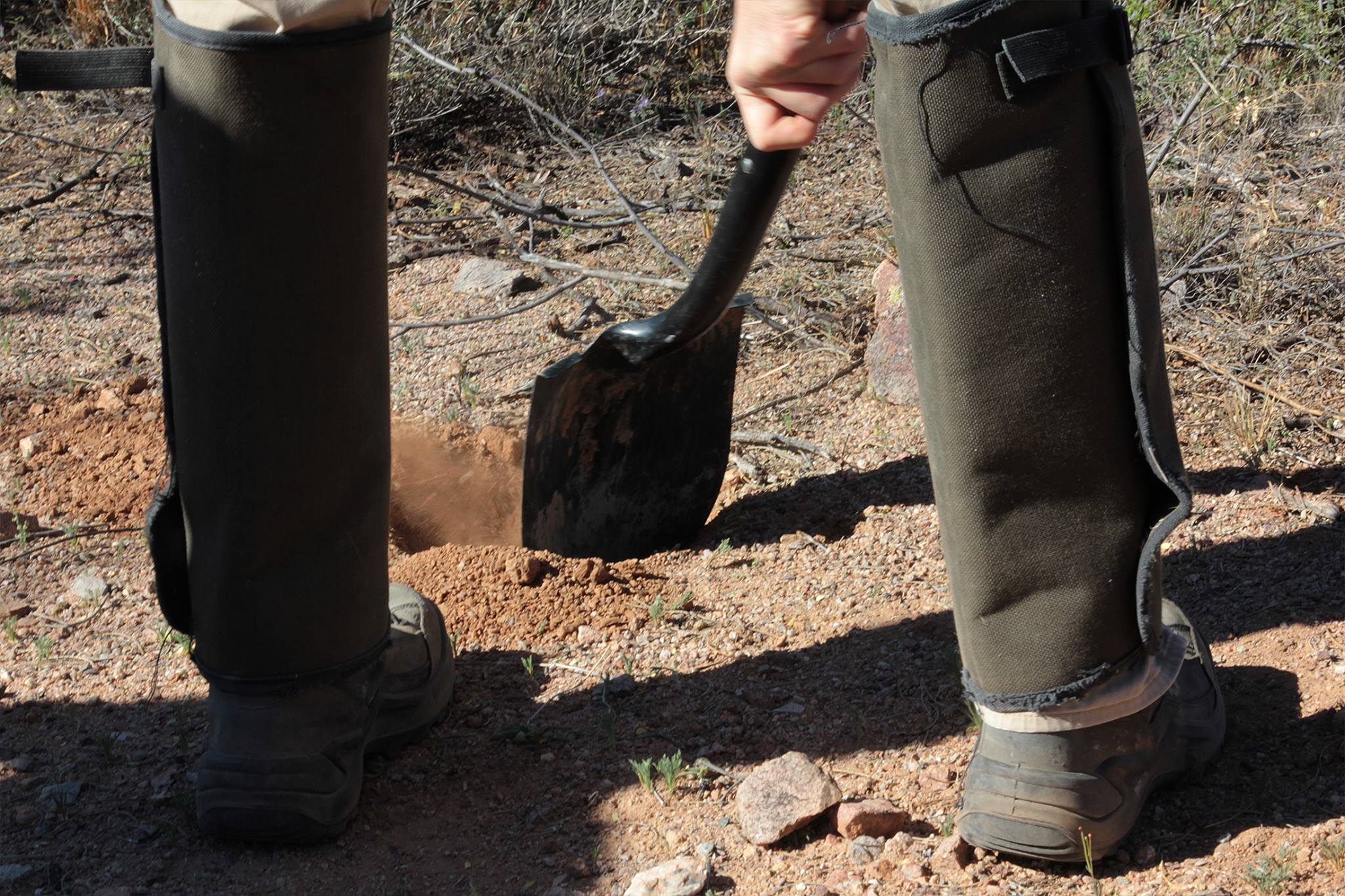 Ron Kovatch, a volunteer with the Tucson Samaritans, digs a hole to plant a handmade cross in Arizona’s Sonoran Desert. Photo by Joshua Barajas. 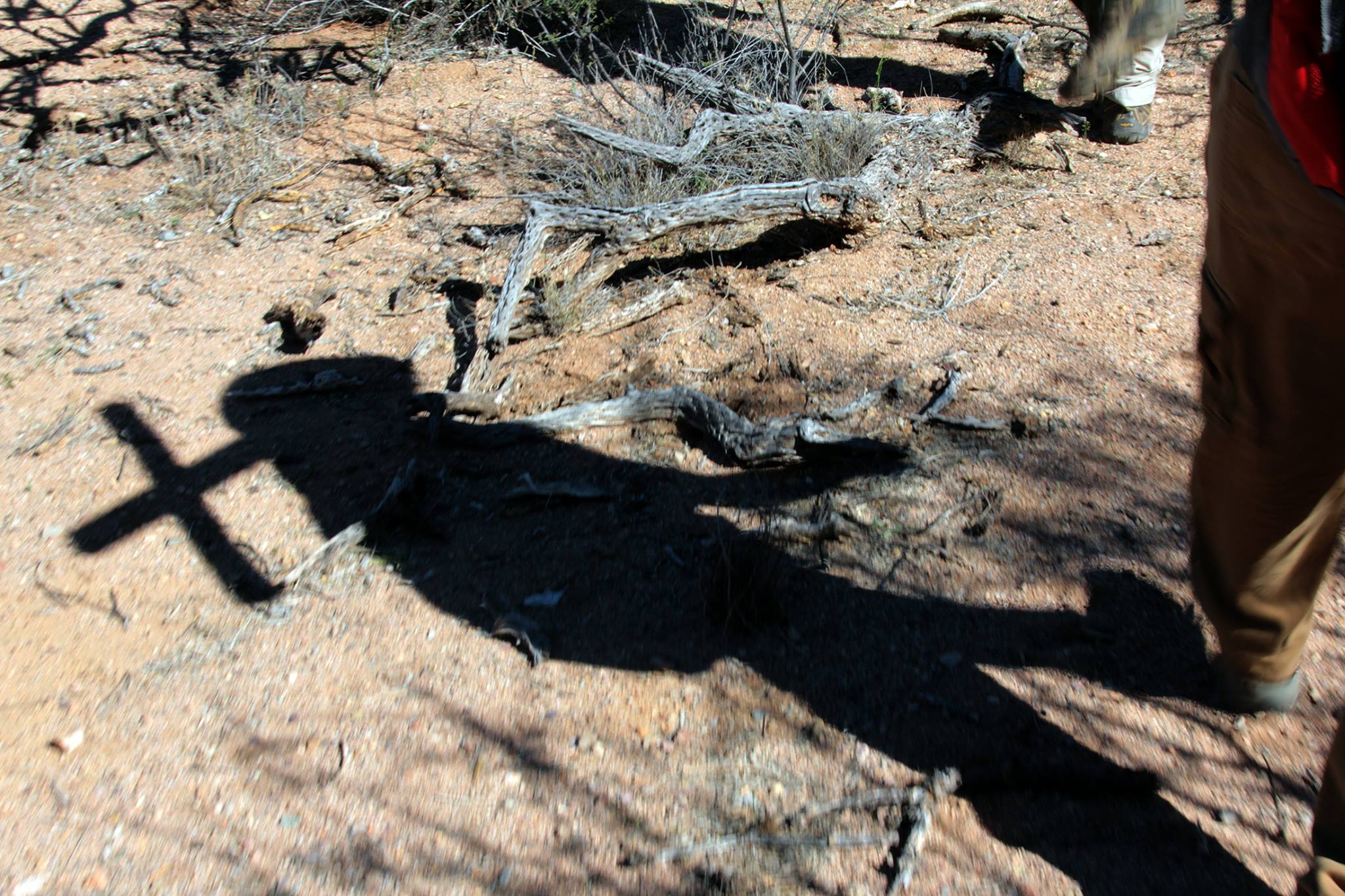 The cross is lowered into the shallow hole. Quick-setting cement carried in a white bucket is then emptied into the gaps around the cross’ end. Water is then poured onto the mix. They have five minutes to orient the cross correctly before the cement hardens. Rocks are placed at the base to make sure cows don’t easily disturb the cross.

Brother Andres Rivera, another volunteer, then drapes a yellow and white rosary over the cross. 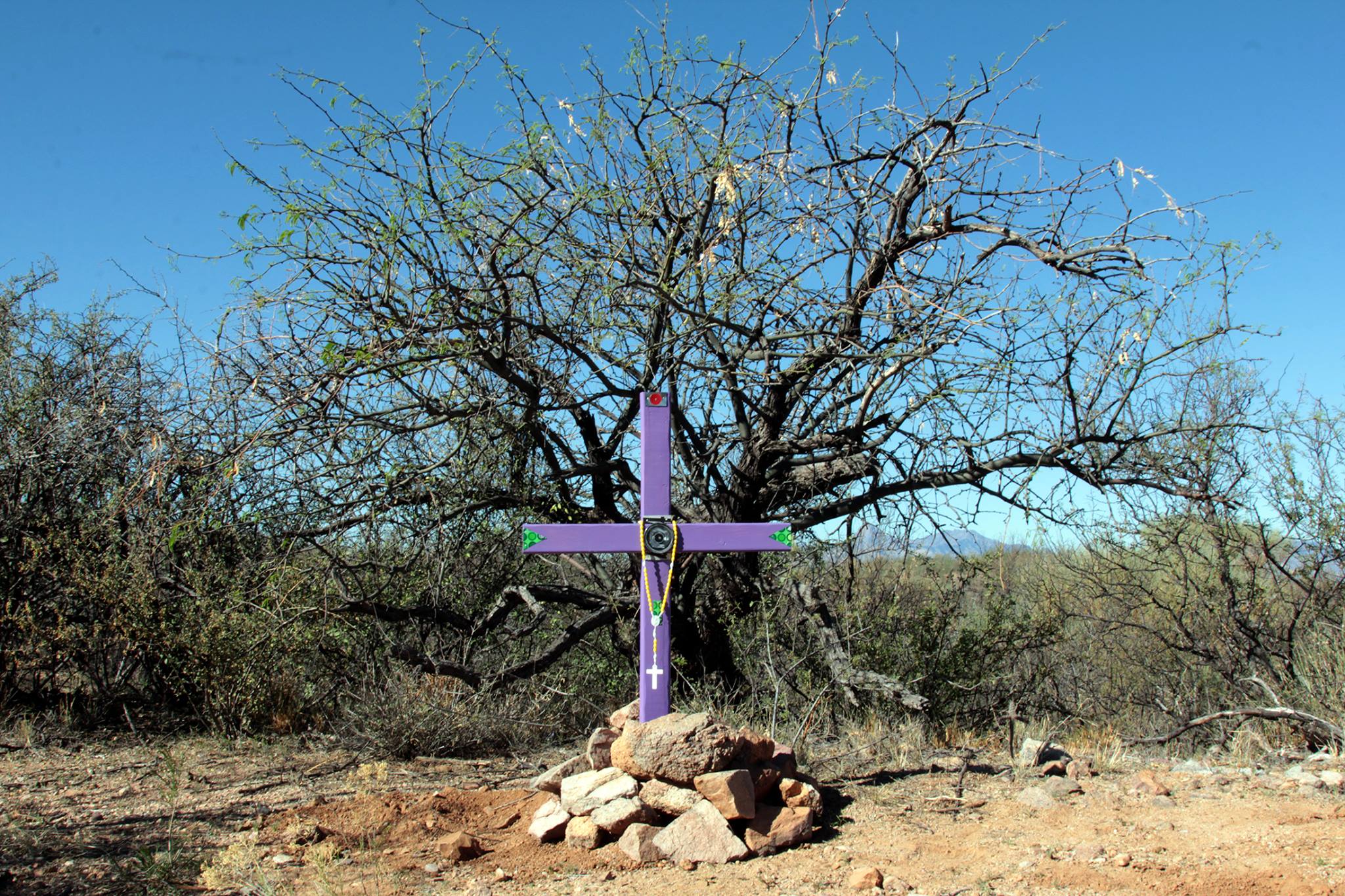 A handmade cross in Arizona’s Sonoran Desert representing where a fallen migrant’s remains were found. Photo by Joshua Barajas.

Enciso says these unnamed deaths are the “saddest cases of them all because the family has no closure.”

Two gallons of water are then usually situated under or in desert trees nearby. With a black marker, Rivera writes a message on one of the jugs for each stop. At the second stop, he writes: “¡Es Para Ti! ¡Que Dios Te Bendiga!” or “It’s for you! God bless you!” in Spanish. 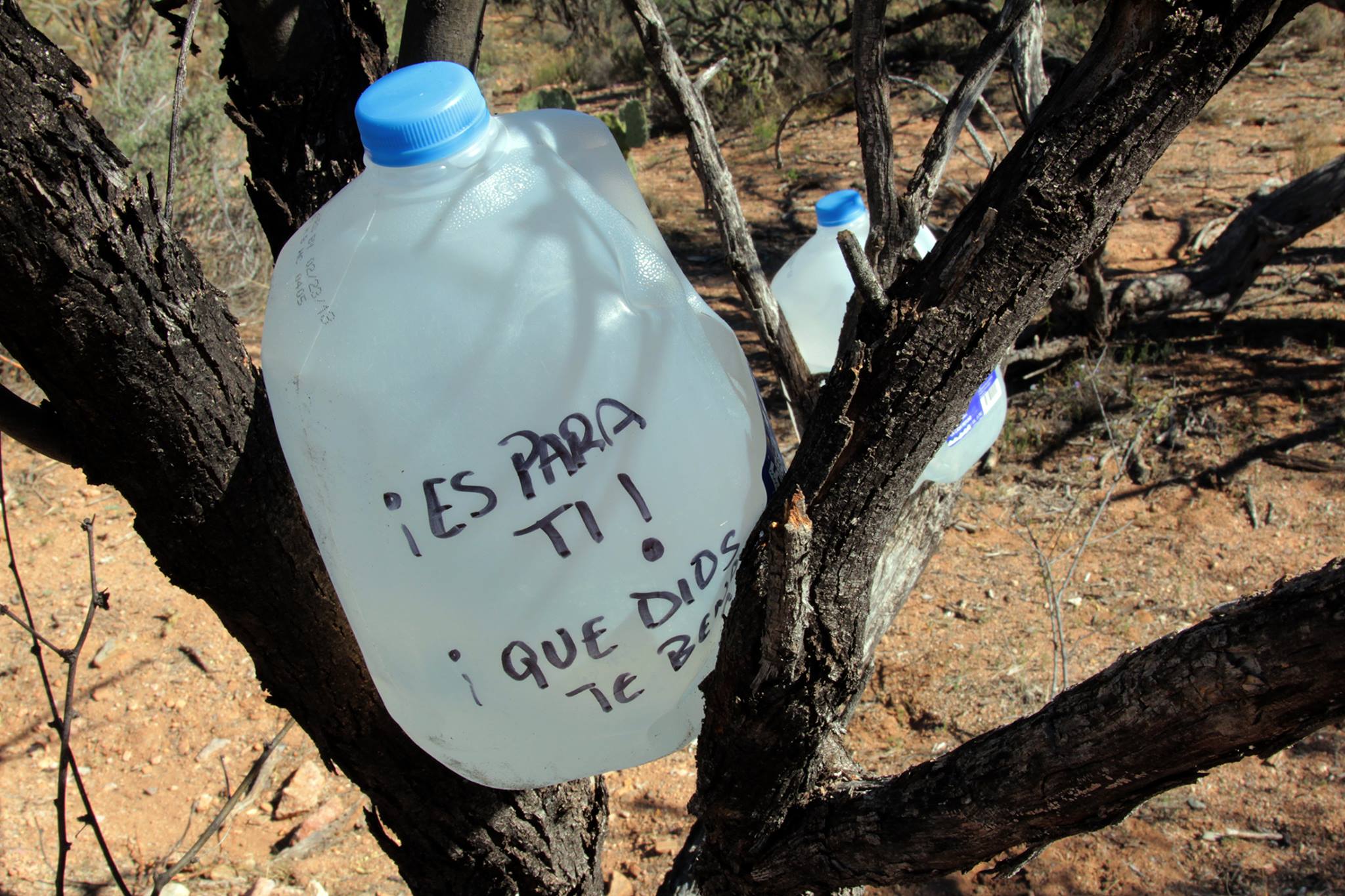 A water jug left by the Tucson Samaritans in Arizona’s Sonoran Desert. The message reads, “It’s for you! God bless you!” in Spanish. Photo by Joshua Barajas.