MIAMI — The man suspected of sending pipe bombs to prominent Democrats and other opponents of President Donald Trump kept a list of elected officials and others who investigators believe were intended targets, an official told The Associated Press on Monday.

The disclosure came as 56-year-old Cesar Sayoc made his initial court appearance in Miami federal court Monday, saying little but tearing up, and after bomb squads were called to a post office in Atlanta about a suspicious mailing to CNN similar to the pipe bomb packages recovered in the case last week.

The official said authorities had recovered soldering equipment, a printer, and stamps similar to those used on the package bombs in the investigation into Sayoc, who was arrested last week in Florida. Authorities believe Sayoc was putting explosives together in his van.

The official wasn’t authorized to discuss the ongoing investigation and spoke on condition of anonymity to the AP. The official also said that, as part of the investigation, authorities were scrutinizing Sayoc’s social media posts.

The FBI said via its Twitter account that the recovered package in Atlanta was “similar in appearance” to the bubble-wrapped manila envelopes authorities say were sent by Sayoc to intended targets from Delaware to California, including former President Barack Obama, former Secretary of State Hillary Clinton and former Vice President Joe Biden.

The #FBI has confirmed a package has been recovered in Atlanta, similar in appearance to the others, addressed to CNN.

CNN President Jeff Zucker says all mail to CNN has been screened offsite since last week, when a series of package bombs began appearing around the country. Among them were two apparent mail bombs sent to CNN.

At least some listed a return address of U.S. Debbie Wasserman Schultz, former chair of the Democratic National Committee. 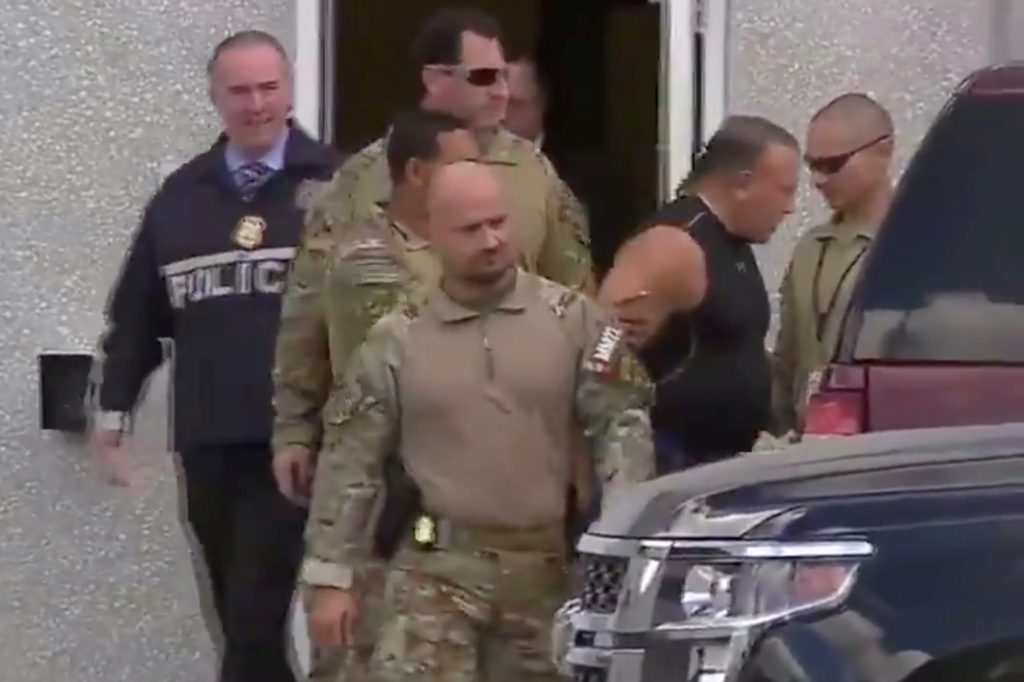 Cesar Altieri Sayoc, who was arrested during an investigation into a series of parcel bombs, is escorted from an FBI facility in Miramar, Florida Oct. 26, 2018 in a still image from video. Image by WPLG/Local10.com/Handout via Reuters

At Monday’s hearing, federal prosecutors said they will seek to keep Sayoc jailed until trial as a flight risk and a danger to the community. A judge set another hearing for Friday on whether to grant bail to Sayoc and to discuss when he will be sent from Miami to New York, where five federal charges were filed.

One of Sayoc’s attorneys, Daniel Aaronson, urged people not to rush to judgment based on media reports.

“Right now, we know very, very, very little,” Aaronson said of the case. “We do not know all the evidence the government has. You have to keep in mind he has not been found guilty of anything.”

Sayoc, shackled at the wrists and ankles and wearing a tan jail jumpsuit, said little at the hearing but at one point tearing up. Aaronson said he did not know what made Sayoc seem emotional but noted he is facing decades in prison if convicted.

Although authorities did not immediately say who might be responsible for the most recent package to CNN, the FBI said it believes the package discovered Monday is similar to those that Sayoc is accused of sending. Law enforcement officials have said they believe the packages were staggered and more could be discovered.

The New York Times said in a staff memo Monday that it had notified the FBI that one of its editors was on a list of potential targets of the mail-bomb suspect. Later that day, an envelope addressed to the editor raised concerns, but New York police determined that it was a false alarm. The editor was not identified.

Sayoc was arrested Friday outside a South Florida auto parts store after investigators said they identified him through fingerprint and DNA evidence.

Authorities say Sayoc faces more than 50 years in prison if convicted on all charges. None of the bombs exploded and no one was injured.