Police have arrested a 23-year-old man for setting a California mosque on fire Friday as congregants were preparing for an afternoon prayer service.

Carl James Dial Jr. was arrested Friday night and charged with a hate crime for starting the blaze. He is also facing  arson and burglary charges and is being held in lieu of $150,00 bail, the Riverside County Sheriff’s Department said. 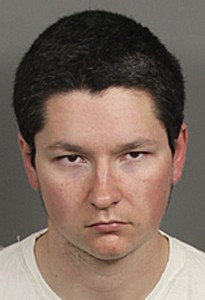 The fire took place at the Islamic Society of Coachella Valley, and is one among several incidents across the United States that have taken place against Muslims since the San Bernardino shootings last week.

The Coachella mosque is located about 75 miles from San Bernardino where 14 people were killed by a husband and wife last week.

While investigators have yet to identify the cause of the fire, the mosque’s acting imam Reymundo Nour said people there described hearing a “loud boom” before flames were spotted in the lobby of the religious building.

Nour indicated he believed a firebomb was the cause also framing it as a terrorist attack, according to the Associated Press. No one was injured, the police said.

“It’s reprehensible and the people who perpetrated that act should be treated the way we would any other terrorist,” John Benoit, the Riverside County Supervisor, told the Los Angeles Times.

In an interview with NBC News Dial’s father said he thought his son was attending a college class when he witnessed him carrying backpack on Friday.

“He was caught up in social media,” Dials father said. “Social media has produced people like my son, without person-to-person contact. I believe he was lacking in social skills.”

In 2014, the same mosque was hit by bullets though no one was charged for the incident.

Left: A view of damage at the burned Islamic Society of Coachella Valley on Saturday. Photo by Sam Mircovich/Reuters.