Video of the clash between police and unarmed protesters at Backwater Bridge, not far from the Standing Rock encampments, emerged on social media Sunday evening.

A young teacher and mother tells police who attack Water Protectors "We are not cattle! We are not animals! We are human beings. We have honor and courage and we not hide behind weapons."

Activists can be heard on several Facebook Live videos shouting “No DAPL!” (Dakota Access pipeline) as law enforcement appeared to use water cannons, tear gas and sound weapons against the people amassed on the bridge.

In its initial statement, Morton County Sheriff’s Department said its officers responded to an “ongoing riot,” involving an estimated 400 protesters who had attempted to remove a burned truck that has been used to partially form a barricade on the bridge. The truck, along with the rest of the barricade, has been there for weeks. 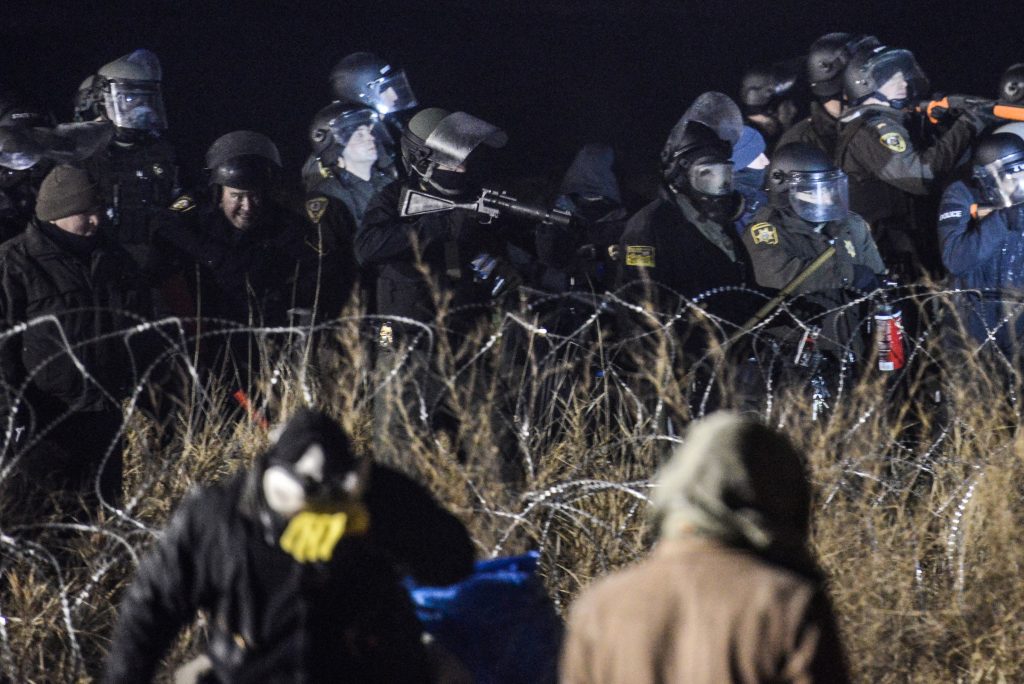 Police confront protesters with a rubber bullet gun during a protest against plans to pass the Dakota Access pipeline near the Standing Rock Indian Reservation, near Cannon Ball, North Dakota. Photo by Stephanie Keith/Reuters

Donna Hushka, a spokeswoman for the sheriff’s department, confirmed to journalist Jenni Monet that law enforcement had used water as “crowd control” against the protesters, who had also started multiple fires around the barricade. Fire trucks at the scene doused those fires and the land around them to prevent them from spreading, she wrote.

Jade Begay, a spokeswoman for the Indigenous Environmental Network, told The Guardian that two bonfires were lit by activists for warmth and cooking, but that any others were started by weapons from law enforcement.

Begay told The Guardian that more than 160 people were injured and another seven activists were transported to a local hospital. 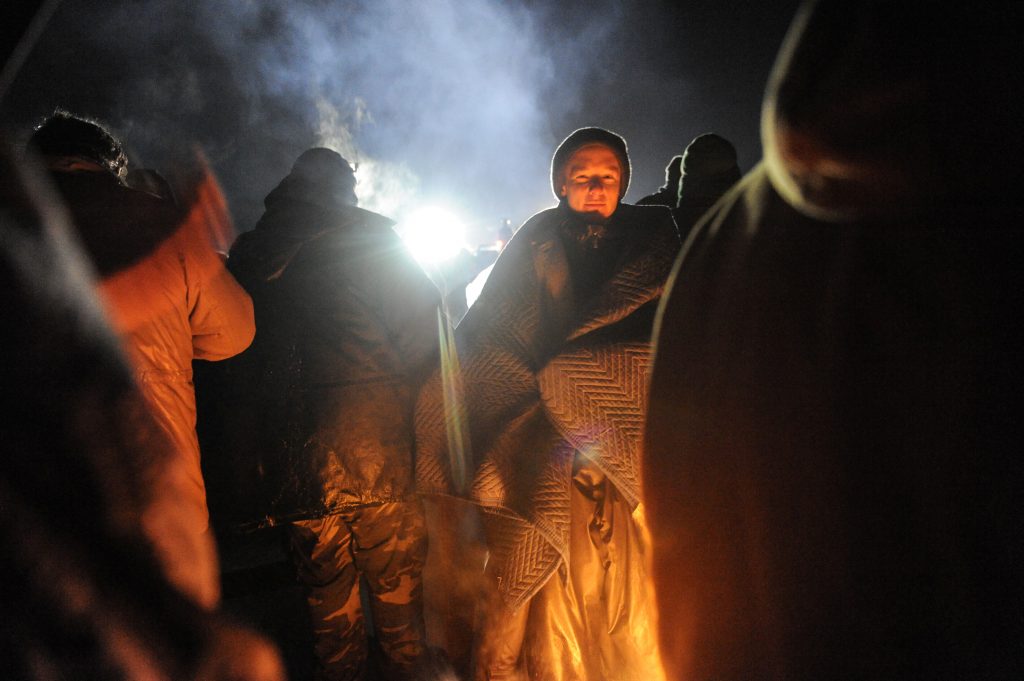 A protester gets warm by a fire during a protest against plans to pass the Dakota Access pipeline near the Standing Rock Indian Reservation, near Cannon Ball, North Dakota. Photo by Stephanie Keith/Reuters

The Indigenous Environmental Network’s Dallas Goldtooth said the water cannons were an “excessive and potentially deadly use of force.”

“Because of the police enforced road block, ambulances now have an extra 30 minutes to get to the hospital,” he wrote in a statement.

When images from the incident started to appear online, critics, including the Standing Rock Medic and Healer Council, called for law enforcement to stop using the water cannons against the protesters in temperatures reaching the low 20’s.

“As medical professionals, we are concerned for the real risk of loss of life due to severe hypothermia under these conditions,” the council said in a post on Facebook.

At least one person was arrested, the Associated Press reported. 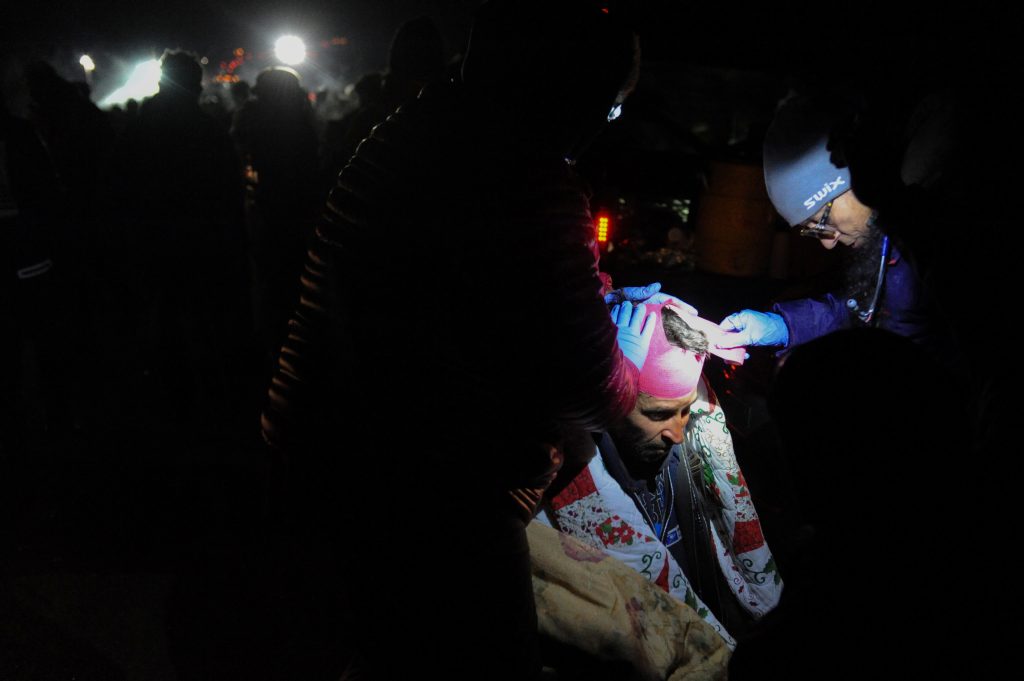 A protester is given medical attention during a protest against plans to pass the Dakota Access pipeline near the Standing Rock Indian Reservation, near Cannon Ball, North Dakota. Photo by Stephanie Keith/Reuters

As protests against the pipeline continue across the country, the protesters who prefer to be called “water protectors” mobilized near the Missouri River have been bracing for a North Dakota winter.

Opponents to the pipeline, including the Standing Rock Sioux Tribe, have said the project threatens the reservation’s main water supply and cultural artifacts of the land. The company building the pipeline, Energy Transfer Partners, has said those claims are baseless.

The Dakota Access pipeline is nearly complete, except for one parcel of land owned by the federal government. Energy Transfer needs a final permit to tunnel beneath Lake Oahe on the Missouri River in rural North Dakota.

The U.S. Army Corps of Engineers, the owners of that land, announced last week that it was delaying construction of the 1,170-mile pipeline until further analysis. The agency said it also welcomed input from the tribe.

In response, Energy Transfer, said the Corps’ decision was “unjust,” adding the the ongoing ordeal over the pipeline’s construction was a “sham process” that send a “frightening message about the rule of law.”

Energy Transfer CEO Kelcy Warren told the NewsHour that the company was building the pipeline “to have minimal impact to all people concerned, and with great input from our government,” adding the “likelihood of a spill into Lake Oahe is just extremely remote.”

The struggle over the Dakota Access Pipeline has intensified, as more protesters have joined the standoff and the company building the pipeline filed suit to get its last permit issued. Kelcy Warren, CEO of Energy Transfer Partners, joins William Brangham to defend the project and insist it’s going forward.

Warren said he was optimistic the pipeline would get built under a Trump presidency. When asked about what happens to the protesters if that happened, Warren said the demonstrations have been “such a disruption to [North Dakota].”

“This is not a peaceful protest. So, if they want to stick around and continue to do what they’re doing, great, but we’re building the pipeline,” he said.

Left: Police use a water cannon to put out a fire started by protesters during a protest against plans to pass the Dakota Access pipeline near the Standing Rock Indian Reservation, near Cannon Ball, North Dakota. Photo by Stephanie Keith/Reuters