Poll: Most Americans say ‘dreamers’ should be granted citizenship

Most Americans think people who entered the United States as children and stayed as undocumented immigrants should be allowed to remain in the country with the parents who brought them. These survey findings come from a new poll by PBS NewsHour and Marist.

Eight out of 10 Americans think so-called “dreamers,” who immigrated to the United States illegally and then were protected from deportation in 2012 under the Obama administration’s Deferred Action for Childhood Arrivals program, should be allowed to stay in the country. Of those respondents, most — 58 percent — think these individuals should be allowed to become U.S. citizens. Another 25 percent of U.S. adults think dreamers should be legal residents, but not receive U.S. citizenship. Just 12 percent of Americans said dreamers should be deported. 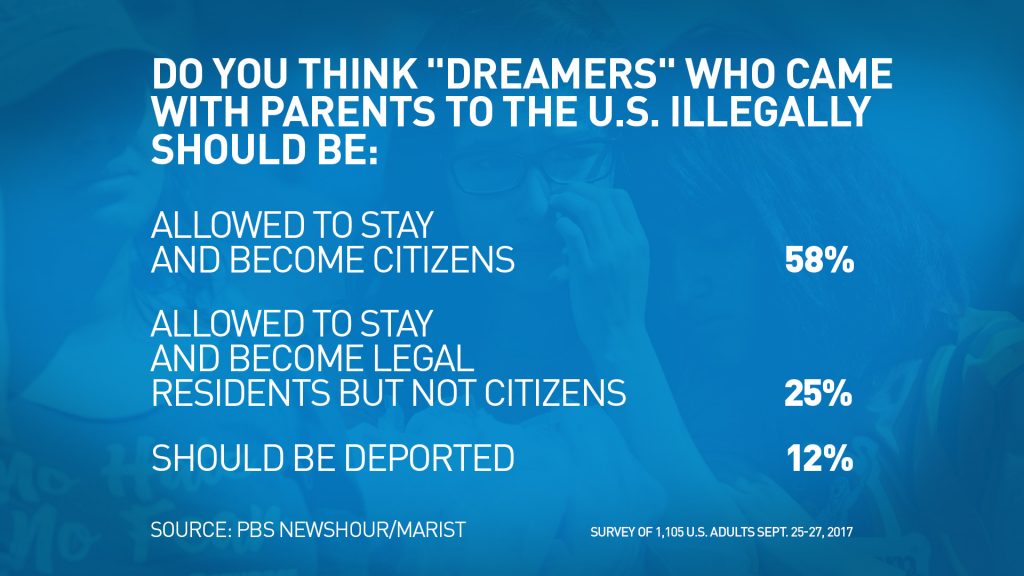 President Donald Trump has called the DACA program “unconstitutional.” In September, he announced plans to end the program, which protects about 800,000 DACA recipients. People who are legally in the United States under DACA must submit their renewal applications tomorrow to meet an Oct. 5 deadline. Forms must be physically received by U.S. Citizenship and Immigration Services by close of business Thursday.

A majority of Americans — 74 percent — also said the parents of dreamers should be allowed to stay in the United States with their children, including 41 percent of respondents who supported citizenship for these parents and another 33 percent who want these parents to stay as legal residents. One-fifth of U.S. adults said they think these parents should be deported.

And along political lines, most Republicans (58 percent), Democrats (92 percent) and people who identify as politically independent (71 percent) think the parents of dreamers should stay united with their families in the United States.