The Pope’s new ‘comedic advisor’ is a rabbi

The Pope has a new comedic advisor… and he’s a rabbi. 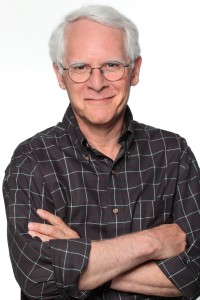 Rabbi Robert Alper, who prefers to go by Bob, is 70 years old and lives with his wife in the rural town East Dorset, Vermont. “It used to be Alpert, but we dropped the T at a party in Boston,” the rabbi told PBS NewsHour in a phone interview.

Rabbi Alper was one of more than 4,000 people from 47 different countries who submitted jokes through a digital contest organized by the Pontifical Missions Society called Joke With the Pope. The contest was designed to promote engagement with the Pope leading up to his visit to the U.S.

The winner, who was selected by a panel of judges chosen by the Missions Society, was given the title of Honorary Comedic Advisor to the Pope as well as the opportunity to choose one of three mission charities to donate $10,000 to. Notable contestants included comedians and talk-show hosts Jimmy Fallon and Conan O’Brien, as well as Today Show weatherman Al Roker.

Raised by faithful Jewish parents who were active in their synagogue, Alper said becoming a rabbi was the “natural choice.” After fourteen years serving on two different congregations, he left the pulpit to devote his time to comedy and writing. “I would always use jokes and funny stories in my sermons in front of my congregation, which would give me over forty-two years of experience performing in front of a hostile audience,” Alper joked, repeating a line he uses in his routine.

Alper still conducts high holiday services for Rosh Hashanah and Yom Kippur every year, where his comedy plays a critical role. He believes that the power of laughter serves as a way to bring people closer to each other and is beneficial to the religious experience. “If one sees another as being funny, right under funny is affable and open,” he said, “And that’s what the Pope does. That’s his calling card, his humor, his smile, his warmth, and that’s characterized my career as a rabbi as well.”

Despite his admiration for Pope Francis as a religious leader, the newest Honorary Comedic Advisor did not enter the contest until he was bored enough to give in to a friend’s “nudging” on Oct. 1, just one day before the submission deadline.

“I was bored, so I took out my camera and I recorded my entry, which happens to be my newest joke,” Alper explained, “And probably the best joke I’ve ever written.”

The joke that won him an honorary title at the Vatican?

“My wife and I have been married for over 46 years, and our lives are totally in sync. For example, at the same time I got a hearing aid, she stopped mumbling.”

The Director of Communications at the Missions Society, Monica Yehle, said the joke was chosen because it was original, funny and had a quick delivery. “It was a joke you would tell the Pope,” she said.

Along with the unofficial title, Alper was awarded $10,000 to donate to one of three charities. His choice was House the Homeless in Ethiopia. He was also given two tickets to see the Tonight Show with Jimmy Fallon. “Very honestly, I am absolutely ready to perform on the Tonight Show,” he said, “I would love to get an audition.”