WASHINGTON — When it comes to baby names, blending in is out, and standing out is in.

Noah and Sophia top the Social Security Administration’s list of most popular American baby names for 2013, but they don’t begin to approach the popularity of past generation favorites like John and Mary.

Noah sailed past Jacob to claim the top spot for boys, ending Jacob’s 14-year reign. Sophia was No. 1 for the third straight year in the list released Friday. 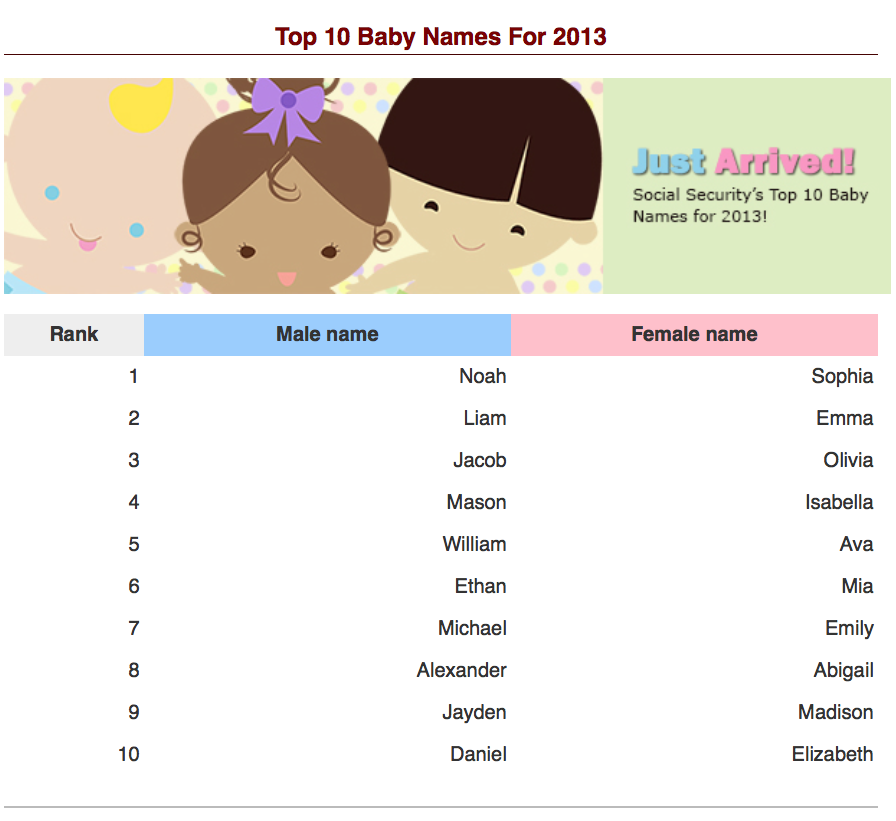 But none of these names is nearly as popular as the top names were a generation ago. Why? Because more and more parents are looking to give their children names that will set them apart, instead of worrying about whether they will fit in.

“Names have more widely become seen as a personal brand, a statement of individual style and personality, and so people are looking for a name that’s different from what other people have,” said Pamela Redmond Satran, co-founder of Nameberry.com. “In the 1950s, everybody was looking to blend in.”

It’s the same story for the girls.

“In the past, most parents were picking from a pretty well-defined set of names,” said Laura Wattenberg, creator of Babynamewizard.com. “Literally for hundreds of years, the English royal names dominated. You had John and Mary and James and Elizabeth.”

“Today,” she said, “we get names everywhere.”

There has been more variety among the girls. Mary dominated the first half of the 20th century. But in the past two decades, Emily, Emma, Isabella and Jessica have all spent time at the top.

“People are not as creative with boys’ names,” said Jennifer Moss, founder of Babynames.com. “I find that when I’m working with parents, the father tends to be more conservative about boys names. His No. 1 concern is always, ‘Oh, I don’t want it to be too crazy or he’ll be teased on the playground.'”

The Social Security Administration’s website provides lists of the top 1,000 baby names for each year, dating to 1880. The top baby names that year were John and Mary. John is now No. 27 and Mary has fallen to No. 121.

Social Security also charts the fastest-rising names each year. These names may not be in the top 10 or even the top 100, but they moved up more spots than any other.

For girls, the runaway winner was Daleyza, which jumped a whopping 3,130 spots, to No. 585. Daleyza is the name of the young daughter of Larry Hernandez, a singer who stars in a Spanish-language reality TV show called “Larrymania.”

“Reality TV is one of the biggest style makers today because it gives us a constant new stream of names from all over the place,” Wattenberg said.

Among the other top risers for girls: Marjorie, Lennon and Jurnee. Jurnee Smollett-Bell is an actress who starred in the TV show “Friday Night Lights.”

For boys, the fastest rising name was Jayceon, which jumped 845 spots, to No. 206. Two hip hop artists are named Jayceon. One simply goes by the name Jayceon. The other, Jayceon Terrell Taylor, is a rapper who goes by the stage name The Game.

Among the other top risers for boys: Milan, Atlas, Jayse and Duke.

Left: Fewer American babies are getting the most popular names, as individuality wins out over a desire to fit in. Photo by Dave Herholz/Flickr