President Reagan’s speech to a nation reeling after Challenger disaster

Thirty years ago, the nation witnessed one of NASA’s most public failures when the space shuttle Challenger broke apart over the Atlantic Ocean 73 seconds into launch, leaving the memorable image of a Y-shaped plume of smoke across the otherwise sunny sky. It also left President Ronald Reagan with the sizable duty of consoling the nation in the face of so much loss.

All seven crew members died, including school teacher Christa McAuliffe, who was selected as the first civilian to fly in space.

“You know how frightened people get when they see things blow up?” speechwriter Peggy Noonan said in her 1986 exit interview. “I kind of figured the entire nation had seen an auto accident.” 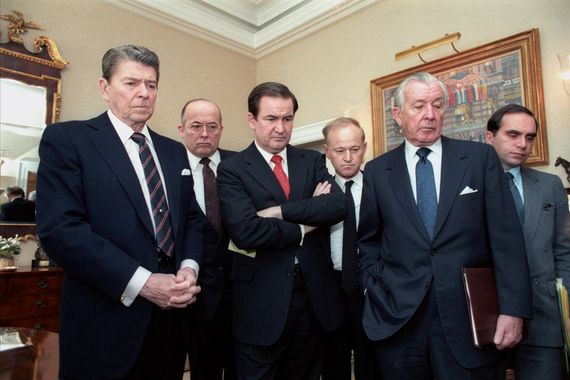 President Reagan and his staff watch a televised replay of the Challenger disaster. Photo courtesy of Bill Fitzpatrick via Ronald Reagan Library

Reagan was scheduled to deliver his State of the Union address later that night, but canceled it for a four-minute, much simpler speech focusing on the disaster. It would be months before NASA scientists would learn the below-freezing temperatures compromised the rockets’ rubber O-rings.

Reagan remembered the victims with an ending was literally poetic; it was taken from a poem, titled “High Flight,” written by American aviator John Gillespie Magee in World War II. Magee died at age 19 from a mid-air collision.

“We will never forget them, nor the last time we saw them, this morning, as they prepared for their journey and waved goodbye and ‘slipped the surly bonds of earth’ to ‘touch the face of God,'” the president said.

Noonan said she remembered the poem from seventh grade. “It’s always very important to put these things in context again and say, ‘Terrible things happen to pioneers, but the trek does not stop here,'” she said.

In a effort to maintain excitement about space exploration, NASA selected McAuliffe out of thousands of applicants to become the first in a series of “payload specialists,” or civilian passengers. On the official insignia of the mission, the 37-year-old high school teacher was represented by a red apple.

NASA also had arranged for live broadcasts of the launch in many classrooms so children could watch the first teacher reach space. 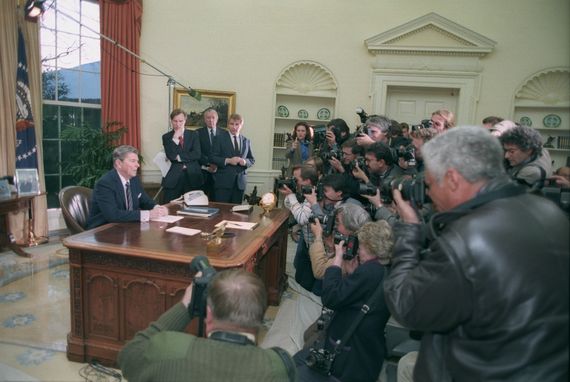 In lieu of his State of the Union address, President Ronald Reagan delivered a four-minute speech hours after the Challenger shuttle broke apart in the sky. Photo courtesy of Mary Anne Fackelman via Ronald Reagan Library

Speaking from the Oval Office, hours after the disaster, Reagan assured Americans the space program would continue, after he directly addressed schoolchildren.

“I know it’s hard to understand, but sometimes painful things like this happen,” the president said, “It’s all part of the process of exploration and discovery. … The future doesn’t belong to the fainthearted; it belongs to the brave.”

Reagan said there would be more shuttle flights and, “yes, more volunteers, more civilians, more teachers in space. Nothing ends here; our hopes and our journeys continue.”