The pair of Portuguese water dogs — Bo with his distinctive white chest and front paws, and the all-black Sunny — are canine ambassadors for the White House, very popular and so in demand that they have schedules, like the president.

“Everybody wants to see them and take pictures,” Michelle Obama said. “I get a memo at the beginning of the month with a request for their schedules, and I have to approve their appearances.” 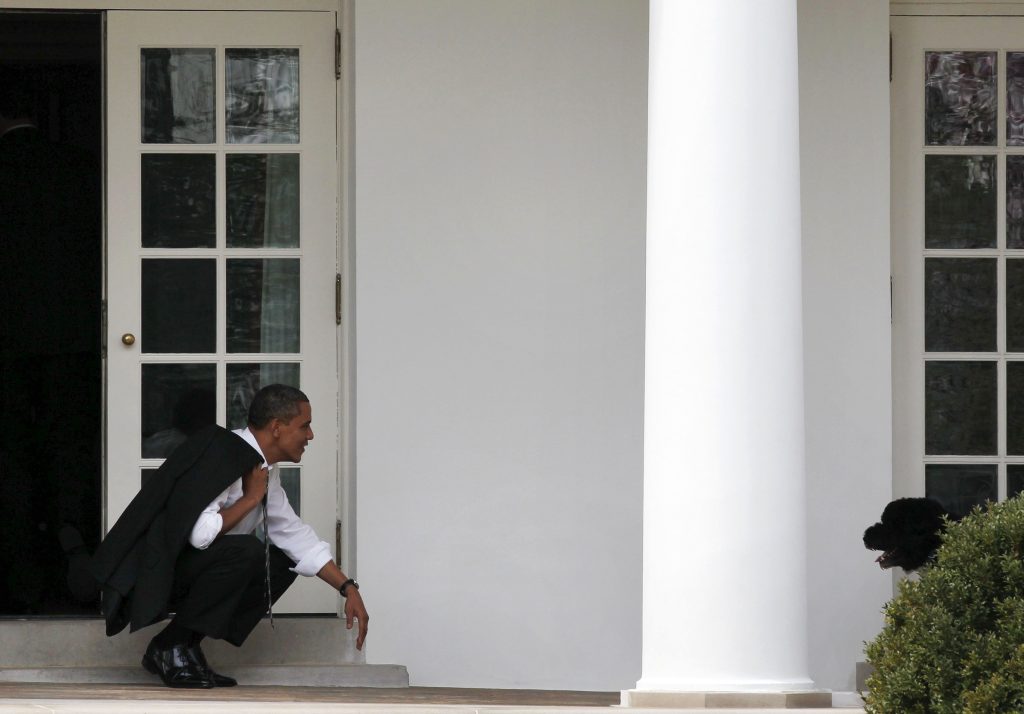 U.S. President Barack Obama bends down to wait for his dog, Bo, to come towards him outside the Oval Office of the White House in Washington March 15, 2012. Photo By Larry Downing via Reuters

The dogs have entertained crowds at the annual Easter Egg Roll and Bo has been at Mrs. Obama’s side when she welcomes tourists on the anniversary of the president’s inauguration. The dogs also have cheered wounded service members, as well as the hospitalized children the first lady visits each year just before Christmas. In a sign of just how recognized Bo and Sunny are, authorities in January arrested a North Dakota man who they say came to Washington to kidnap one of the pets.

Bo, now 7, joined the Obama family in April 2009. He was a gift from the late Sen. Edward M. Kennedy, D-Mass., a key supporter of Obama’s 2008 presidential campaign who became close to the family. Bo helped Obama keep a promise to daughters Malia and Sasha that they could get a dog after the election. 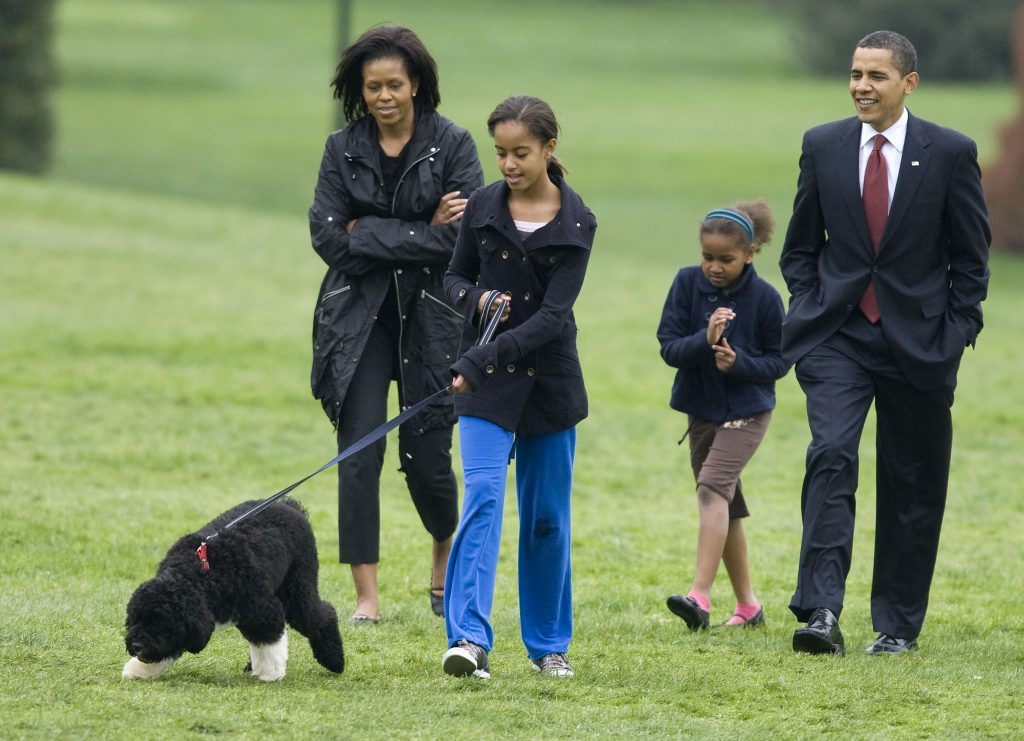 Bo already had a job as a “helper” to Dale Haney, the head groundskeeper at the White House, which happens to be a national park.

“He leaves every morning and he goes down with Dale … and he’s with all the National Park Service guys. And you’ll see him, and he’s like walking around with them, and looking at the plants,” Mrs. Obama said. “I think he thinks he has a job because he takes it very seriously. So if I go out and see him, he kind of ignores me when he’s with his worker crew people.”

The dogs have a pretty nice life. “They can sit on my lap, they sit on my chair, they cuddle with me,” Mrs. Obama said. “I like to lay on the floor with them and blow in their face. I like to make them run and chase each other. But they’re so cute, I just love to just cuddle them and massage them.” 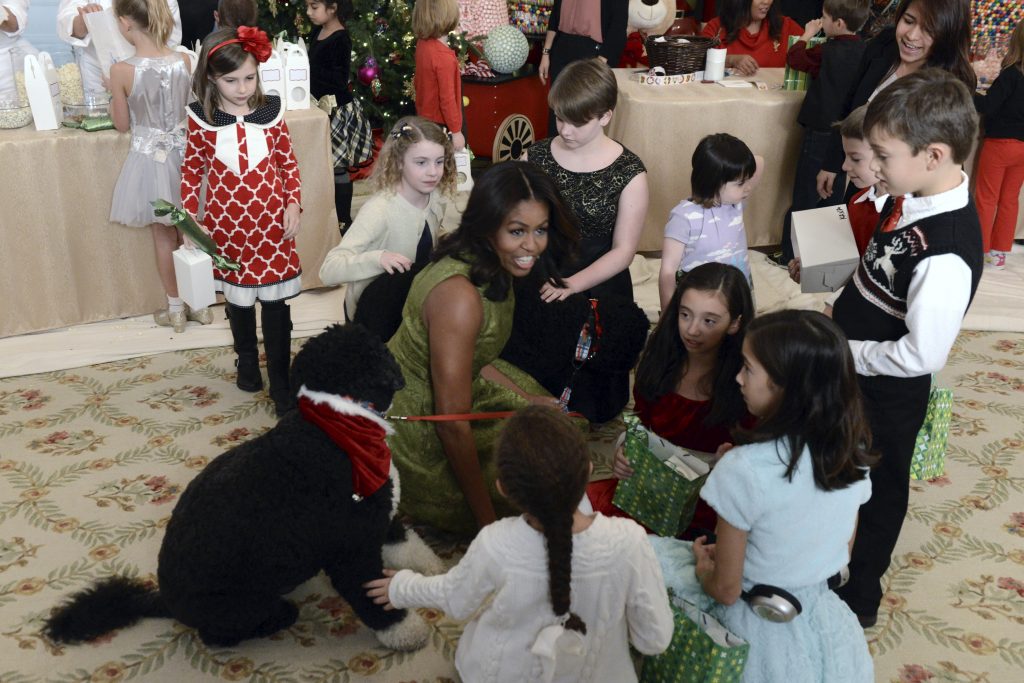 First Lady Michelle Obama, center, chats with children of military families as they gather to see the pets Bo and Sunny and enjoy holiday decorations and treats at the White House, in Washington, D.C., on Dec. 2, 2015. Photo By Mike Theiler/Reuters

Presidential pets are always popular and many presidents kept dogs as companions. President Harry S. Truman famously advised: “If you want a friend in Washington, get a dog.”

President George W. Bush’s Scottish Terrier, Barney, had an official web page and starred in “Barneycam” videos that were filmed from a camera hung around his neck. Like Mrs. Obama, first lady Laura Bush was involved with the video scripts and the taping schedule. 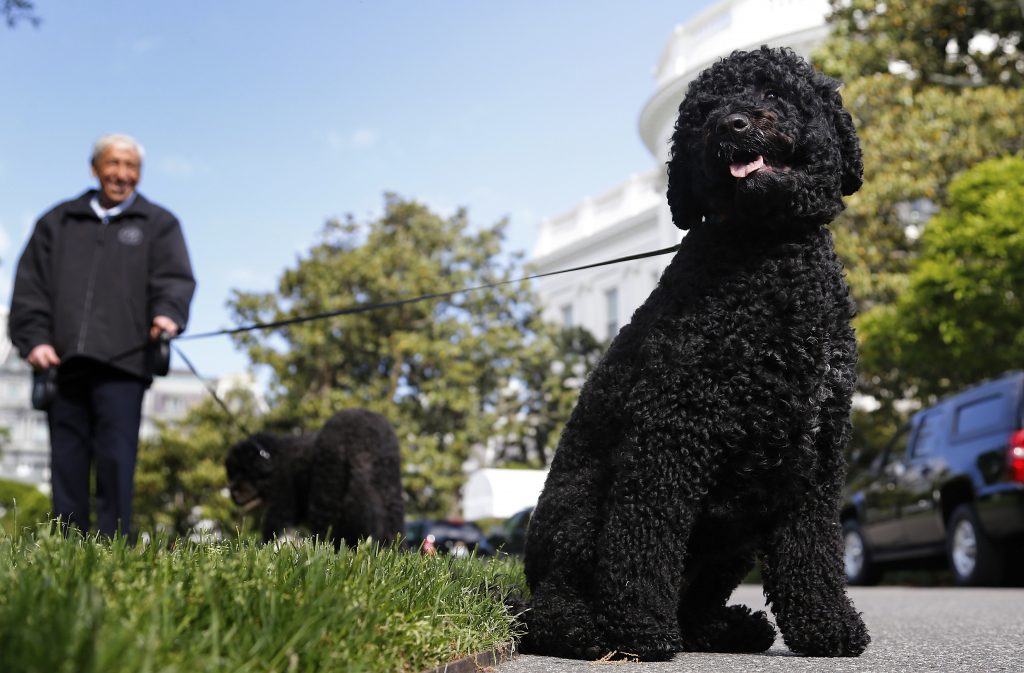 U.S. President Barack Obama’s dogs Bo, left, and Sunny, right, get a walk on the South Lawn of the White House in Washington, D.C., on May 17, 2014. Photo By Jonathan Ernst/Reuters

President Lyndon B. Johnson angered animal lovers by lifting his pet beagle, Him, by the ears in front of news photographers.

Obama promised last year to “clean things up a little bit” before leaving the White House in January because the dogs “have been tearing things up occasionally.”

Mrs. Obama said her four-legged family members had been nice overall, but she exposed Sunny’s naughtier side.

“You know what she does sometimes? She leaves the kitchen and she’ll sneak and she’ll go poop on the other end of the White House,” the first lady said.