How do you count a city’s homeless population? You walk the streets

A PBS NewsHour team set out with a group of volunteers who blanketed Washington, D.C., to count the city’s homeless population in one night. Video by Joshua Barajas.

How do you count a population of people in one night? The men and women without an address, who camp out on city grates, in shelters and along highways. In the Nation’s Capital, they’re silhouetted against its grandest monuments.

Nearly 300 volunteers have until 2 a.m. to count and survey every homeless person they can find on the streets of D.C. They’ll check bus stops and Metro stations, 24-hour convenience stores, emergency rooms and alleyways.

It’s part of Department of Housing and Urban Development’s annual point-in-time count of the homeless, which doesn’t include doubled-up families or couchsurfers, something that the Department of Education and the Census include in their reports. These are the men and women who are considered “undeniably” homeless. Last year, HUD counted a nationwide total of 578,424 homeless, 7,748 of whom lived in the District.

Here in the church’s meeting room, the volunteers listen to D.C. Mayor Muriel Bowser optimistically declare that the city will end chronic homelessness while members of HUD rev up the crowd.

We pack up to head out. Volunteers are armed with down jackets, granola bars, maps, surveys and McDonald’s gift cards — an incentive to give to those who share their information.

My colleague Joshua Barajas and I are tagging along with the Capitol Hill group.

Karen Cunningham, Executive Director at Capitol Hill Group Ministry, says it’s a good thing if we don’t find many people tonight since that means they’re hopefully out of the cold. It’s a subtle reminder that this isn’t a scavenger hunt.

It’s 32 degrees when we set out toward Union Station. The ink in my pen has frozen.

When we arrive, we find Alph. He lives near the giant fountain in front of the landmark train station. 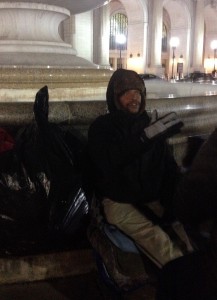 Alph has been homeless for nearly three years. He resides just outside of Washington’s grand train depot, Union Station. Photo by Colleen Shalby

“I’m here. But I didn’t want to be here,” he tells us. He points to his possessions, packed into a dozen of garbage bags. He has a front-row view of the Capitol.

Alph is considered one of the chronically homeless. He’s been living on the streets for nearly three years. Powers listens as he recounts the story of how he lost his housing. She nods her head and checks the appropriate boxes. She tells him she’ll see him next week. Then she hands him a $10 gift card.

“Warmer,” we’re told, than past years. Alph sticks to his fountain outside as we venture inside Union Station where several homeless men and women sit with their belongings in the marble lobby.

“Shelters don’t go together with a good thought,” says Norman, a 30-year-old who’s a graduate of Tulane University.

He echoes a sentiment we’ve been hearing a lot — that shelters can be dangerous. Many prefer makeshift spaces instead.

Norman has been living on the streets of D.C. for a year and a half. He tells me that “a whole bunch of stuff” led him from the life of a physics major and college graduate to that of a homeless man who sees his family only on Facebook.

The volunteers are checking in with the other homeless men and women, many who are sleeping upright so as not to get kicked out for lying down. Most agree to answer some of the survey questions. One man quietly declines. He’ll become a number without a name.

I say goodbye to Norman and walk out with the volunteers. Someone is buffering the marble floors. The sound echoes across the giant hall as we leave the regal building and its temporary residents behind. 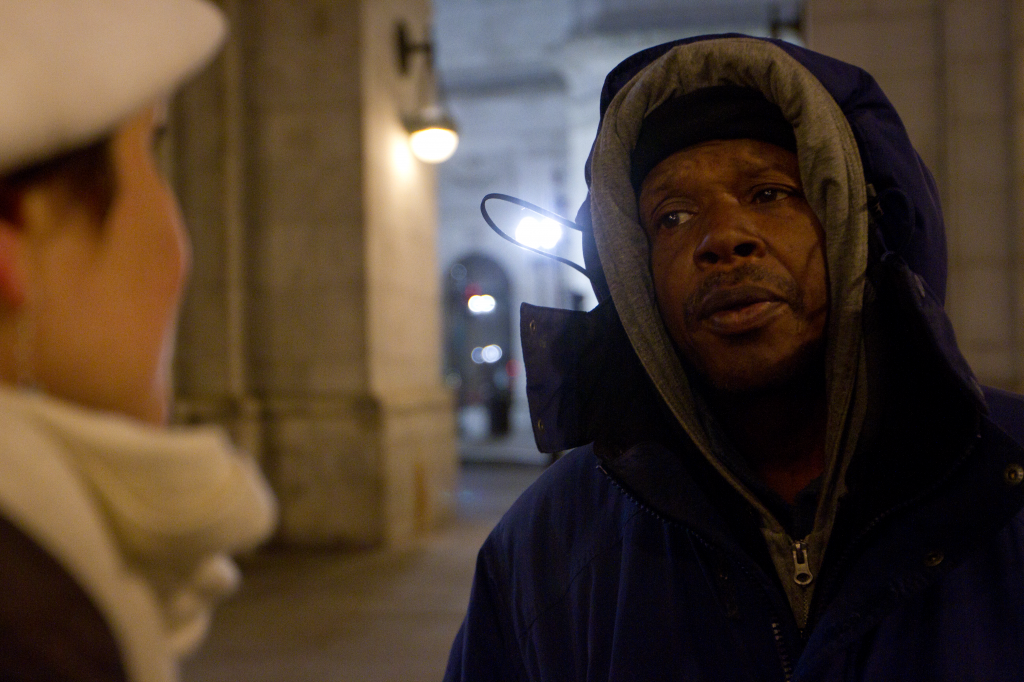 We head back to home base.

Along the way, I talk to Adam Maier, Director of Housing at Pathways to Housing DC who’s been a part of the count here “five or six times.” He tells me about coordinated entry — a program implemented in 25 cities that aims to place the homeless with resources specific to their needs. Those with drug or alcohol abuse problems, for example, would get different help than someone suffering from a mental illness.

Maier says that nearly 1,000 people move into the District each month, driving up rent and forcing some to the streets.

Affordable housing is key to the city’s mission to end chronic homelessness. But the roadblock here, much like inside the halls of the Capitol, remains funding and budgeting.

Back at our meeting place, Whitney Parnell, Community Engagement Manager at Capitol Hill Ministry, is checking in with volunteers, pointing them toward the hot chocolate.

She notes the contrast between the homeless and the power players who live side-by-side in the nation’s capital.

“This represents the land of opportunity,” she says. “This is where decisions are made to really change the country and the world. Yet we’ve got so many of our neighbors that don’t have a place to stay.”

And though they remain invisible to some, on this night, they’ve been counted.