Imam and his associate shot dead in New York

An imam and his associate were shot dead on Saturday afternoon in Queens, New York, officials said.

Imam Maulama Akonjee, 55, and Thara Uddin, 64, were leaving Al-Furqan Jame Masjid after a 1 p.m. prayer service when they were shot in the back of the head, CBS News reported.

Mourners and members of the largely Bangladeshi Muslim community gathered at the scene on Saturday afternoon, describing the imam as a well-respected leader.

The imam’s daughter, Naima Akonjee, told the Associated Press that her father and Uddin were friends who “always walked together to the mosque from their homes on the same street.”

The police have not issued a motive for the shooting. The two men were dressed in religious garb, and Imam Akonjee was carrying more than $1,000. The money was not taken, The New York Times reported.

A law enforcement official who spoke anonymously to the Times said that the crime “did not fit any existing pattern and cautioned that the motive was still wide open.”

“What it does seem is that it was planned, to some extent,” the official said.

On Sunday morning, police released a sketch of a man who witnesses saw flee the scene with a gun. No arrests have been made. 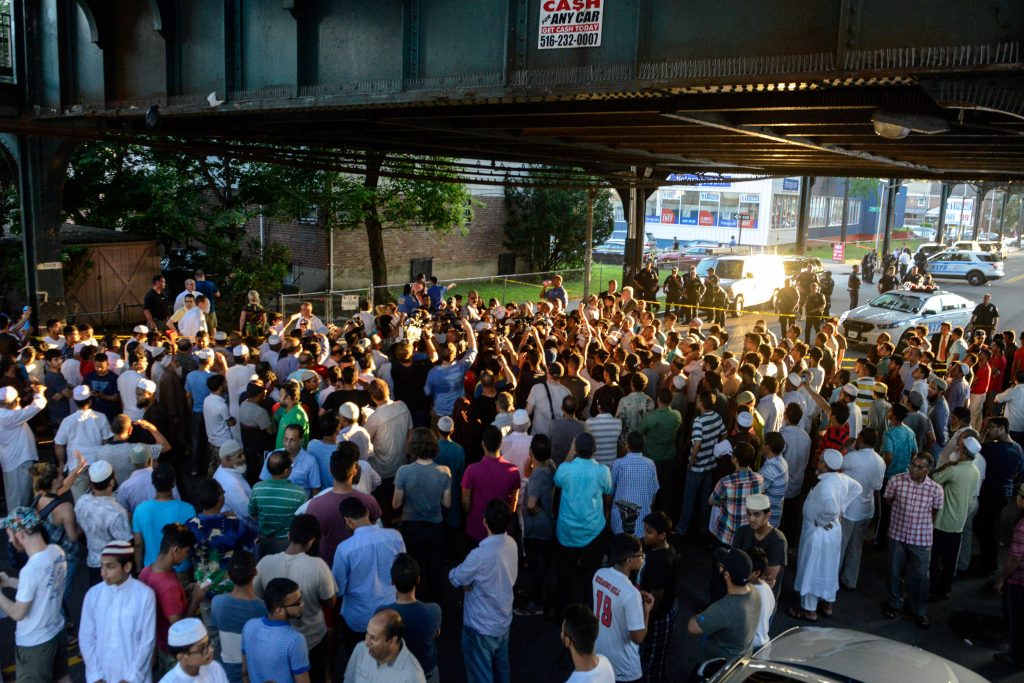 A crowd of community members gather at the place where Imam Maulama Akonjee and his associate Thara Uddin were killed in the Queens borough of New York on August 13, 2016. Photo by Stephanie Keith/Reuters

More than 100 neighborhood residents, religious leaders, and mosque-goers gathered at the site of the shooting, expressing concern that Saturday’s shooting was a hate crime. In December, the Times reported that instances of anti-Muslim violence tripled after the attacks in Paris and San Bernardino.

“We feel really insecure and unsafe in a moment like this,” Millat Uddin, a resident of the community where the two men were shot, told CBS News.

The Anti-Defamation League, a Jewish non-governmental organization based in New York, urged the NYPD to investigate the shootings as a possible hate crime, the Associated Press reported.

Online, the hashtag #IllWalkWithYou emerged, as non-Muslims offered to accompany Muslim people to and from their mosque for safety.

Because I know what it's like when they come for me, and I won't let them come for you. #IllWalkWithYou

I'm big and tall and scary looking, and I love you and I want you to feel safe #IllWalkWithYou

For some grieving residents, it was difficult to see Saturday’s shooting as anything but political.

“That’s not what America is about,” community member Khairul Islam told the New York Daily News. “We blame Donald Trump for this…Trump and his drama has created Islamophobia.”

Community and family members who knew Imam Akonjee, who moved to the U.S. from Bangladesh two years ago, said he was a respected religious leader and father.

“He would not hurt a fly,” Imam Akonjee’s nephew Rahi Majid told the New York Daily News. “You would watch him come down the street and watch the peace he brings.”

Left: A crowd of community members have a moment of silence at the place where Imam Maulama Akonjee and his friend Thara Uddin were killed in the Queens borough of New York on Aug. 13, 2016. Photo by Stephanie Keith/Reuters