When Marilyn Hollinquest was a child, she struggled to understand injustice she experienced in her community. “I was not equipped with the tools that would help me understand and contribute to equality for all people,” she told NewsHour.

As an adult, Hollinquest’s friend Anayvette Martinez had a daughter struggling with the same issues. “I saw the need for a group that would empower and encourage her to form bonds of sisterhood with other girls in her community,” Martinez said on Facebook.

“I began to imagine what a radical young girl’s social justice troop looked like,” Martinez wrote, “a group that centered and affirmed her experiences as a beautiful and brilliant brown girl against so many societal pressures to conform to mainstream ideals of girlhood.”

Martinez approached Hollinquest with a vision for such a group in 2014, and the Radical Brownies were born. The inaugural chapter was established in Oakland, California, and is open to young girls of color between the ages of 8 and 12.

The group’s mission statement describes the Radical Brownies as a group that empowers young girls of color “so that they step into their collective power, brilliance and leadership in order to make the world a more radical place.”

The uniform includes a beret to “pay homage to the spirits of the Brown Beret and Black Panther movements of the past,” according to the group’s website.

Although Hollinquest said she has respect for what the Girl Scouts do, the Radical Brownies are not affiliated with the national group. So instead of badges for camping skills and cookie selling, the girls can earn a radical beauty badge, a food justice badge, and a radical self-love badge, among others. 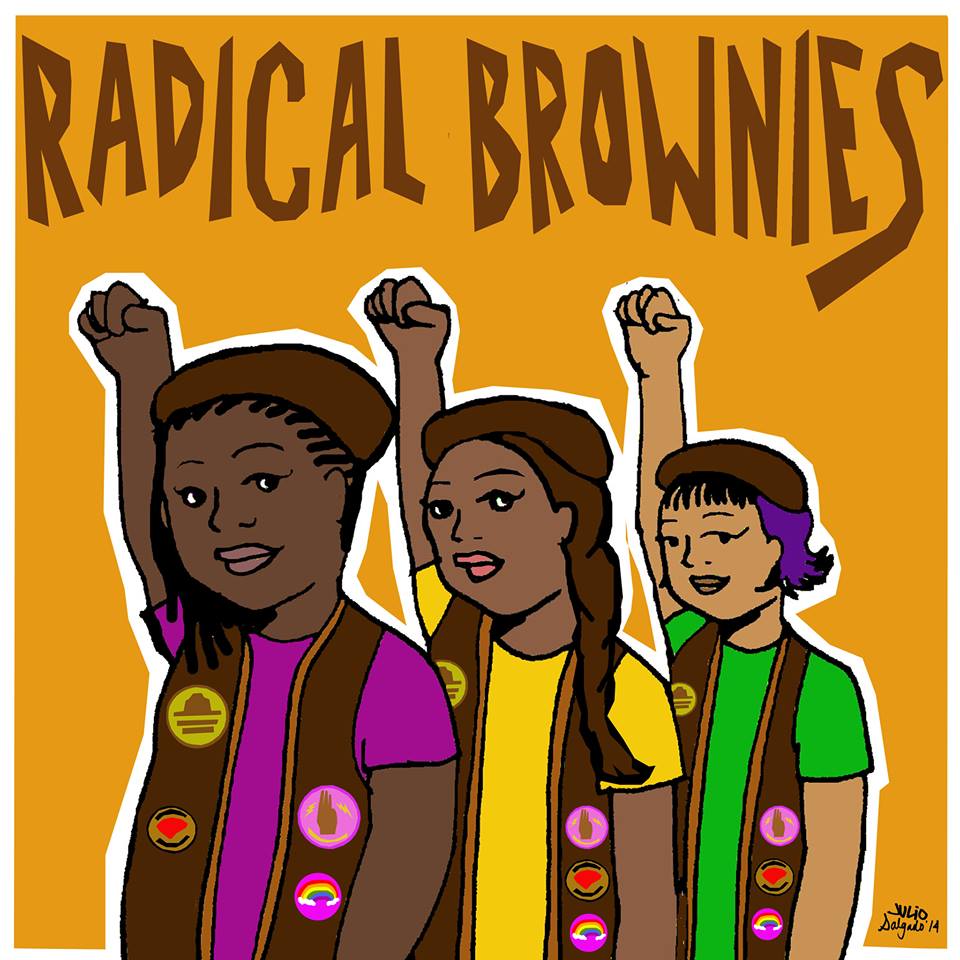 Hollinquest says that at their first meeting, the leaders allowed the girls to define the word radical for themselves. “For us, radical means [being a] fierce community advocate,” she said of the group.

The group has participated in actions with Black Lives Matter, a movement born out of opposition to police killings of unarmed black people. “We are giving them the tools to process what’s happening around the world because they are very much aware, and they had questions about what the protests were about,” Hollinquest said.

In addition to community involvement, the girls also get to participate in what Hollinquest calls “general fun stuff.” They made gingerbread houses during the holiday season and also learned how to create their own beauty products, like sugar scrubs.

The co-founders have seen a huge outpouring of support for the group on social media, but Hollinquest said there has been pushback, too. Conservative groups have questioned the group’s policy that focuses on serving girls of color.

“They emphasize girl power, but why are they making it exclusive to certain skin colors?” asked Hannah Bleau, a writer for Young Conservatives. “Aren’t all girls girls?

“Empowering a specific group of people under the tag ‘young women of color,’ which is in fact our focus, doesn’t mean you have to oppress somebody else, or in order to make yourself feel better step on someone else,” Hollinquist said. “I think that’s really important, that key piece of affirming young women of color’s fierce brilliance and sisterhood does not equal anti-anything, we’re very pro-empowerment, pro-community involvement.”

Hollinquest and Martinez have been approached with interest to expand the group and create new chapters in other cities. Hollinquest said the group definitely wants to grow and wants to make sure the girls have a full say in how these new chapters are formed and what they look like.

“In this first sort of chapter we’re taking the time to make sure we have a strong foundation for what we want other chapters to do,” she said.