WASHINGTON — Supreme Court nominee Amy Coney Barrett vows to be a justice “fearless of criticism” as the split Senate charges ahead with confirmation hearings on President Donald Trump’s pick to cement a conservative court majority before Election Day.

Barrett, a federal appeals court judge, draws on faith and family in her prepared opening remarks for the hearings, which begin Monday as the country is in the grips of the coronavirus pandemic. She says courts “should not try” to make policy, but leave those decisions to the government’s political branches. She believes she would bring “a few new perspectives” as the first mother of school-age children on the nine-member court.

Trump chose the 48-year-old judge after the death of Justice Ruth Bader Ginsburg, a liberal icon.

“I have been nominated to fill Justice Ginsburg’s seat, but no one will ever take her place,” Barrett says in her remarks to the Senate Judiciary Committee. The Associated Press obtained a copy of her statement on Sunday.

Barrett says she has resolved to maintain the same perspective as her mentor, the late Justice Antonin Scalia, who was “devoted to his family, resolute in his beliefs, and fearless of criticism.”

Republicans who control the Senate are moving at a breakneck pace to seat Barrett before the Nov. 3 election, in time to hear a high-profile challenge to the Affordable Care Act and any election-related challenges that may follow the voting.

Another reason for moving quickly: It’s unclear whether the election results would make it harder to confirm Barrett before the end of the year if Democrat Joe Biden were to win the White House and Democrats were to gain seats in the Senate.

Read Barrett’s full opening remarks as prepared by clicking below. 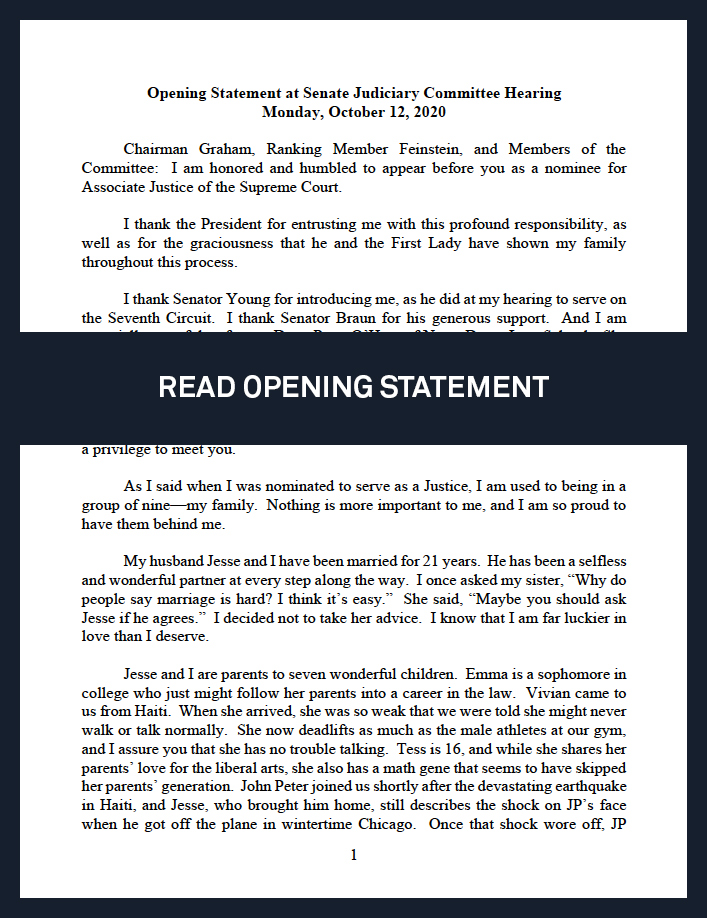 Left: U.S. Court of Appeals for the Seventh Circuit Judge Amy Coney Barrett will appear before the Senate Judiciary Committee for the first day of her confirmation hearing Oct. 11. File photo byREUTERS/Carlos Barria