Fifty years ago this summer, President Lyndon B. Johnson signed the Civil Rights Act into law. But that didn’t come without a price. It was the era of the Freedom Summer, a brave and bloody campaign to get blacks registered to vote in Mississippi.

Over 10 weeks, 37 churches were bombed or burned. Four civil rights workers were killed. Many more were hurt. In our storytelling series “The Voices of Freedom Summer,” we hear from key figures in the battles of the early ’60s — and from people studying that struggle a half-century later.

The Freedom Summer volunteers took the baton from another group called the Freedom Riders, who risked their lives to challenge segregated travel centers in the South.

Last December, a group of Dallas school kids boarded a bus and followed the path of the Freedom Riders. They passed through Vicksburg and Jackson, Mississippi, shook hands with city leaders and saw 16th Street Baptist Church in Birmingham, Alabama, which was bombed by white supremacists in 1963.

But the trip almost didn’t happen. Jerry Chambers, a civil rights activist and retired educator who led the project, had to push it back a month as he struggled to raise funds. And there was another obstacle. Chambers begins our series “The Voices Of Freedom Summer” with a reflection on last year’s journey.

Ernest McMillan was one of the young civil rights workers who traveled to the heart of the South to help blacks register to vote in 1964.

A college student then at Morehouse College in Atlanta, he’d go on to run the Dallas chapter of the Student Nonviolent Coordinating Committee. He’d also lose a close friend to violence and spend time in prison for demonstrating at a neighborhood grocery store.

Before all that, he was just a kid at a protest.

McMillan recalls when he first realized what he was up against. Editor’s note: McMillan’s story includes harsh language.

‘I Have Friends In The Graveyard For This’

Rev. Peter Johnson was a 19-year-old civil rights worker during the Freedom Summer. He and his colleagues pulled up to plantations across the South in an old school bus purposed as a mobile dentist’s and doctor’s office, helping blacks prepare for the test required to become a registered voter.

He remembers discovering explosives duct-taped underneath a borrowed Plymouth he was driving;, the letters “KKK” scratched into the side of the car.

Here, Johnson reflects on that time — and how he feels about new forms of voter suppression considered less obvious than the poll tax that drew activists to Mississippi.

Linwood Fields first went on Southern Methodist University’s Civil Rights Pilgrimage in 2009. He served as a student leader for the two years following. Fields, who’s now a member of the U.S. military, was inspired by the volunteers whose paths he traced. But none impacted him more than the young civil rights leader David Dennis.

He was about Fields’ age when the terror of the early ’60s in Mississippi gave him a grim platform from which to deliver an impassioned speech. It was a eulogy for his friend.

[featuring “If You’re Out There” by John Legend]

When Cody Meador attended the Civil Rights Pilgrimage offered by SMU in 2008, she expected to feel the impact of lives lost for the right to vote on the battlegrounds of the South. But instead she found discrimination was very much alive in New Orleans in the wake of Hurricane Katrina.

[featuring “Compared To What” by Eddie Harris and Les McCann]

At Home, A Museum Of Victory And Loss

The Freedom Summer effort drew national attention after black Mississippian James Chaney, 21, and two white New Yorkers, Andrew Goodman, 20, and Michael Schwerner, 24, went missing. Schwerner’s wife and colleague Rita told the press in outrage that if Chaney was the only volunteer to have disappeared, the story wouldn’t have been in the news. 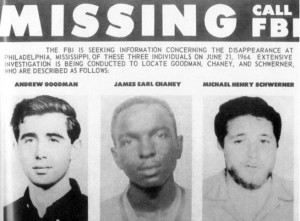 The three civil rights workers were found shot to death in Philadelphia, Miss., their bodies buried in an earthen dam near the Mt. Zion Methodist Church, one of the sites where Schwerner organized a “Freedom School” to train volunteers.

They’d been murdered by members of the Ku Klux Klan.

Parts of Texas were major hubs for the Klan — Fort Worth and rural Tarrant County included. Judge Maryellen Hicks remembers the group’s presence in the city even into the 1980s.

Hicks showed me around her three-story Fort Worth town home, filled with black memorabilia and art.

As part of our series “The Voices of Freedom Summer,” Hicks explains a pair of framed photos on an easel she keeps right by her dinner table.

[featuring “I’m On My Way” by Nina Simone]

KERA will be collecting more voices through the month of June. The PBS documentary “Freedom Summer” airs on PBS on June 24. See a trailer below.

PBS NewsHour is working on an ongoing online civil rights project. Do you or someone you know remember when the Civil Rights Act of 1964 was passed? Share your memories with us by calling our oral history hotline at 703-594-6727, or email us your stories and memories from that time at NewsHour64 [at] gmail [dot] com.