Registering to vote brings out emotions among Florida felons

ORLANDO, Fla. — The normally humdrum bureaucracy of registering to vote brought tears to the eyes of some Floridians on Tuesday when most felons regained their right to vote under a state constitutional amendment.

“I’ll be a human being again. I’ll be an American citizen again,” Robert Eckford said, choking up and weeping after filling out an application at the elections supervisor’s office in Orlando.

The ballot measure went into effect Tuesday, overturning a ban that netted Florida the highest number of disenfranchised felons in the nation. It potentially increases the pool of eligible voters by as many as 1.4 million people in a battleground state infamous for its narrow margins in key elections.

“I’m an ex-Marine,” said Eckford, who served seven years for a drug conviction. “I served this country. I’ve done my time. I’ve made some mistakes. But thank God the system works.”

Nearly 65 percent of Florida voters last November approved Amendment 4, which was crafted so that it would take effect on Tuesday. It applies to all felons who have done their time and completed the terms of their probation and parole, with the exception of people convicted of murder or sex offenses.

It is still not clear how those registrations will be treated in the state capitol. Gov. Ron DeSantis said on Monday that he believes the Legislature still needs to pass an implementing bill spelling out the restoration process.

“There’s going to need to be guidance for that. It’s not delaying it. The people spoke on it. It’s going to be implemented, but I think it needs to be implemented the way people intended, and I don’t think that they wanted to see any sex offenders fall through the cracks,” he told reporters. 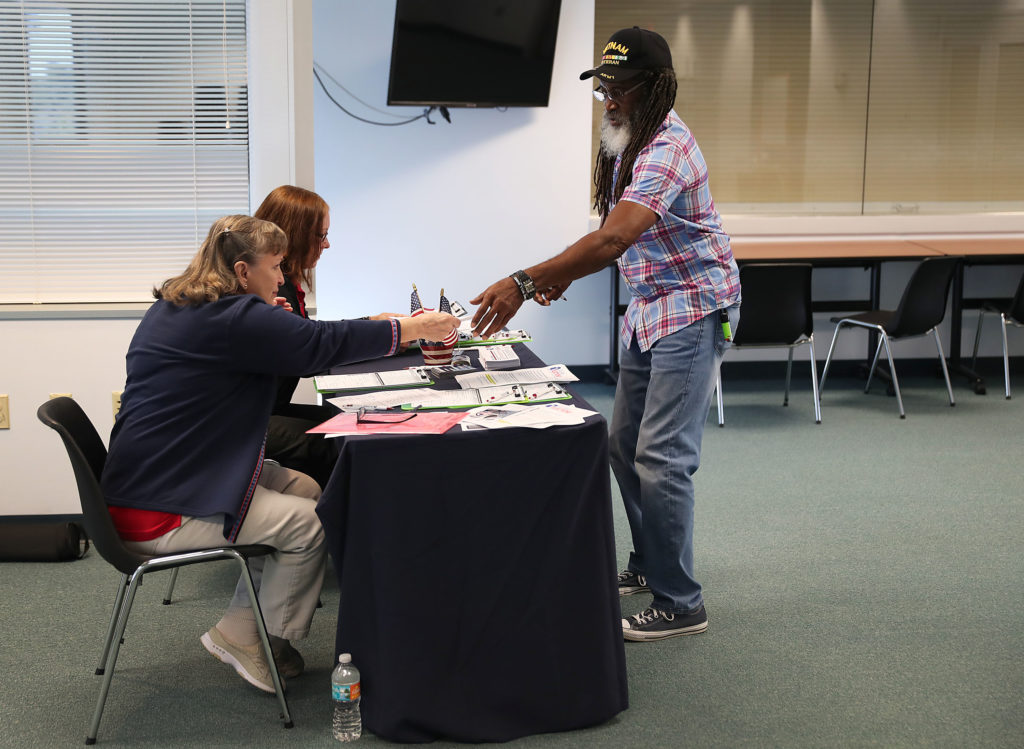 Civil rights groups have maintained the measure is self-executing, but just to be sure, they warned that they are ready to go to court if there are any delays. Elections supervisors across the state posted notices at their offices and websites saying they would accept the registration forms starting Tuesday. They noted the new voters don’t need to present proof that they completed their sentence; they can simply fill out the existing application, signing under oath that their voting rights have been restored.

Members of the Florida Rights Restoration Coalition said they expected the registration to go smoothly. Despite any confusion, the organization’s president, Desmond Meade, encouraged members to celebrate.

Meade has been fighting to regain his right to vote since 2006 when he had served his sentence for a drug offense. Meade readied his family to head out south of downtown Orlando before the sun rose Tuesday. Wearing shirts with the slogan “Let my people vote,” Meade likened his journey to the 1960s movement to end widespread practices that kept black voters away from the polls.

“Moms and dads took their kids to vote with them during the civil rights era,” he said. “I can vote for the first time with my family and that means a lot to me. That means not only do I get to vote, but this is an opportunity now to stimulate a conversation about how important voting is.”

Until the amendment passed, Florida’s constitution automatically barred felons from being able to vote after leaving prison. The state’s clemency process allowed the governor and three elected Cabinet members to restore voting rights, but it was for many an arduous process and the governor could unilaterally veto any request.

Dan Smith, a University of Florida political scientist who studies elections, says it may take time for the effects of the change to become evident.

“There is very little evidence that individuals who have the opportunity to have their rights restored are going to immediately take advantage of that opportunity,” Smith said.

Although black people were disproportionately affected by felony disenfranchisement, they are not a majority of the population with felony convictions, Smith said. He says it is unclear whether the newly franchised voters will sway Florida red or blue. There is no public record of how people who were removed from the rolls have historically voted.

“These are questions that political scientists like myself are going to be looking at in great detail.”

Democratic Party leaders in the state and nation emailed statements welcoming the new voters and accusing Republican politicians of attempting to silence them in the past.

“Democrats will never stop fighting to expand access to the ballot and ensure that no one is silenced or sidelined on Election Day,” said Tom Perez, chair of the Democratic National Committee.

Left: Lance Wissinger is hugged by Permon Thomas as Neil Volz looks on (R) as they fill out their voter registration forms at the Lee County Supervisor of Elections office on January 08, 2019 in Fort Myers, Florida. Mr. Wissinger and Mr. Volz, both with felony records, are now able to register to vote for the first time after a new constitutional amendment took effect, which automatically restores voting rights to most people who have felonies on their record. Photo by Joe Raedle/Getty Images

In Florida, Amendment 4 restores more than a right to vote