In the winter of 2003, the CIA received a disturbing bit of information. Al-Qaida, the intelligence said, was planning to strike the U.S. by hijacking a specific list of incoming international flights from France and other nations.

The agency shared the information with the White House. They had flight numbers, schedules and possible coordinates for the attacks. After speaking with the French government, President Bush issued an order to ground certain flights worldwide, severely disrupting holiday travel.

But it turns out the intelligence was flawed. In fact, no such plot existed to crash Air France 747s in the U.S., nor was there any credible intelligence that al-Qaida was planning a Christmas attack. Few knew exactly from where the bad information had originated, thanks to silos inside the intelligence sphere. The information had come from Dennis Montgomery, a little-known government contractor who claimed he had the ability to decode secret al-Qaida messages embedded in Al Jazeera broadcasts. After the groundings, French officials demanded access to Montgomery’s software, and handed it over to a team of French engineers to analyze.

The French engineers concluded Montgomery’s claims were an elaborate hoax. There were too few pixels in an Al Jazeera broadcast image to contain hidden messages.

Just a few years before the phony holiday terror plot, Montgomery had been a frequent presence in a Reno, Nevada casino, where he gambled compulsively and claimed to have designed software that could analyze security video to recognize betting patterns and catch cheaters—or count cards into an eight-deck blackjack game.

How did a Reno casino con man manage to convince the President of the United States to ground international flights? 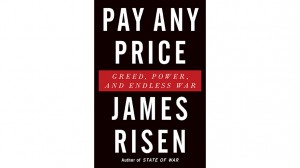 Montgomery’s tale is told in detail on James Risen’s new book, Pay any Price, Greed, Power, and Endless War. Risen’s reporting explores how a national security complex, flush with cash to fight terrorism, attracted individuals like Montgomery—people who seemed to have too-good-to-be true technology designed to fill needs in a frightened and overwhelmed Washington. Montgomery’s fantastic claims about his casino software attracted the interest of the Department of Defense, and he slowly made his way up the ladder to the CIA. At one point, Risen says, Montgomery’s intelligence information was so revered, the White House considered issuing an order to shoot down a passenger plane over the Atlantic. Fortunately, that never happened. Risen puts Montgomery’s career into perspective:

Montgomery was the maestro behind what many current and former U.S. officials and others familiar with the case now believe was one of the most elaborate and dangerous hoaxes in American history.

Montgomery never worked directly for the CIA, but amassed DOD contracts worth millions of dollars and continued working on government contracts well into the Obama administration. A culture of secrecy and a lack of accountability enabled him to bounce from agency to agency, collecting contracts for years, Risen says.

As for Montgomery, he still says that his company’s software was useful in the war on terror, Risen writes, but he is unable to share details due to the classified nature of his work.

Watch more of James Risen’s interview with Judy Woodruff on the PBS NewsHour.