Shy and soft-spoken, Rosa Parks was the ideal candidate to lead the Montgomery Bus Boycott. She didn’t attract negative attention from the movement’s detractors and Dr. Martin Luther King Jr. regarded her as “one of the finest citizens” of the city. But underneath her calm demeanor was a woman who bore witness to white violence her entire life. When Parks wrote to friends one month after Dec. 1, 1955, the fateful day she refused to leave her bus seat, she described segregation as a “complete and solid pattern as a way of life.”

Now, on what would have been Parks’ 102 birthday, 7,500 manuscripts, 2,500 photographs and other artifacts from Parks’ life are available to researchers for the first time at the Library of Congress. The library will house them on a 10-year-loan from the Howard G. Buffett Foundation who purchased the collection for $4.5 million last summer. A portion will be available to the public in the library’s Jefferson Building in March and several items will also appear in the library’s civil rights exhibit. 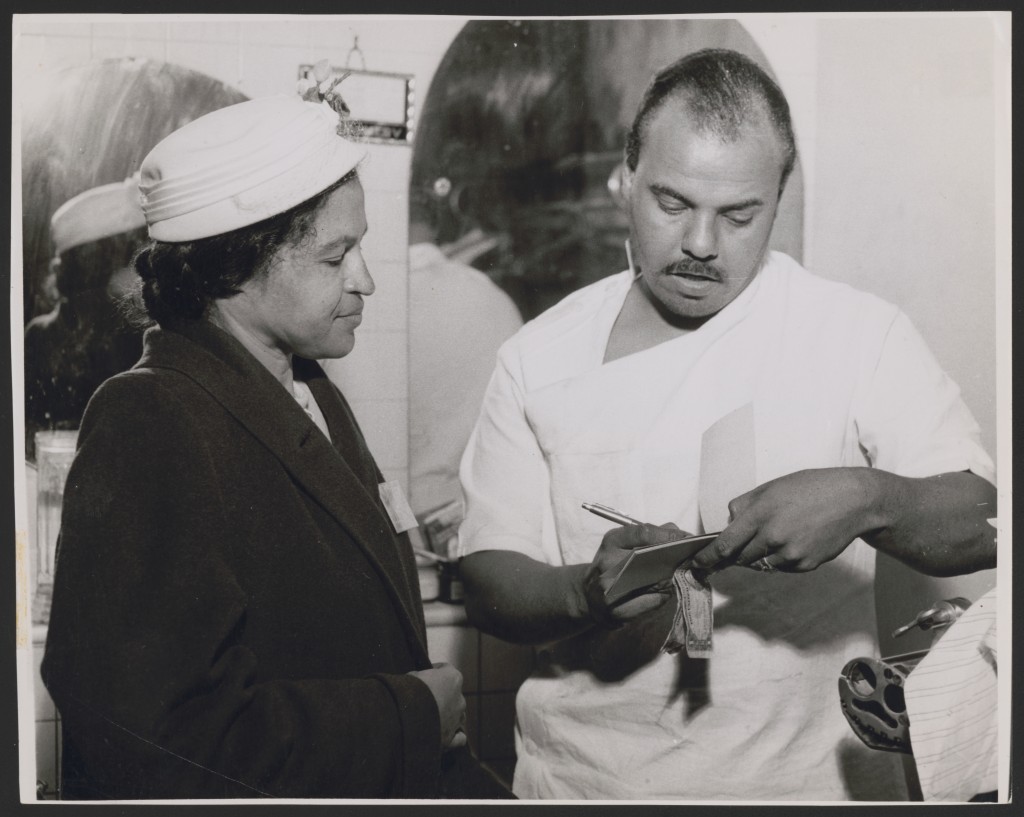 Rosa Parks collecting NAACP membership dues of $2, likely during her trip to Los Angeles in 1956. Photo by McLain’s Photo Service via The Library of Congress

When Parks died in 2005 at age 92, she gifted her belongings to the Rosa & Raymond Parks Institute for Self Improvement, which she founded with a friend, Elaine Steele. But when her nieces and nephews challenged the will, alleging that Steele influenced Parks’ decision, everything from her family Bible to her famous pillbox hat were seized by a court and placed for sale. Complications with the probate court meant Parks’ belongings lay in a New York city warehouse, unseen for years.

According to Steven G. Cohen, who represents the Rosa & Raymond Parks Institute, the family dispute has long been settled. “I’m sure I speak for everyone involved: they’re thrilled with the disposition of the artifacts and the use made by them,” said Cohen. 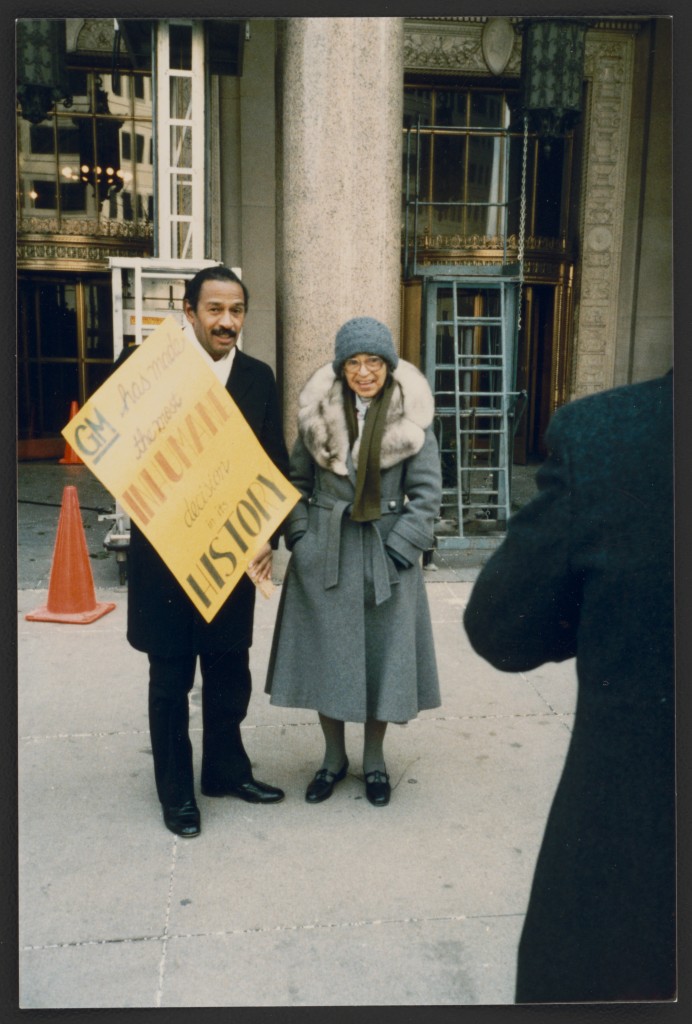 Rosa Parks and Congressman John Conyers, in Detroit, circa 1990. Photo courtesy of the Library of Congress

Parks’ belongings chronicle her journey after she was thrust in the middle of a civil rights struggle. While her discrimination case against the Montgomery was buried in Alabama’s court system, she kept up with similar work in Detroit where she campaigned for Rep. John Conyers’ first congressional election, collaborated with black labor groups and African-American independence movements, and organized on behalf of political prisoners and a rape victim.

“This material is more of an extended look at the person,” said Maricia Battle, curator of photography in at the Library of Congress’ Prints and Photographs Division. It “takes us outside of that moment that she seems to be frozen in, the woman seated on the bus.”

“We have photos of her at the Million Man March, with Conyers protesting at the GM headquarters, with Pope John Paul in St. Louis in 1999 and with Stokely Carmichael. Just things that you would not have expected that she would have been involved in,” Battle said.

Most enjoyable for Battle were the photographs of Parks’ husband Raymond, who Battle says we have to assume as “the love of her life.” Seeing those images and the few letters the library has between them was “a confirmation that this was the one person who understood her the most.” 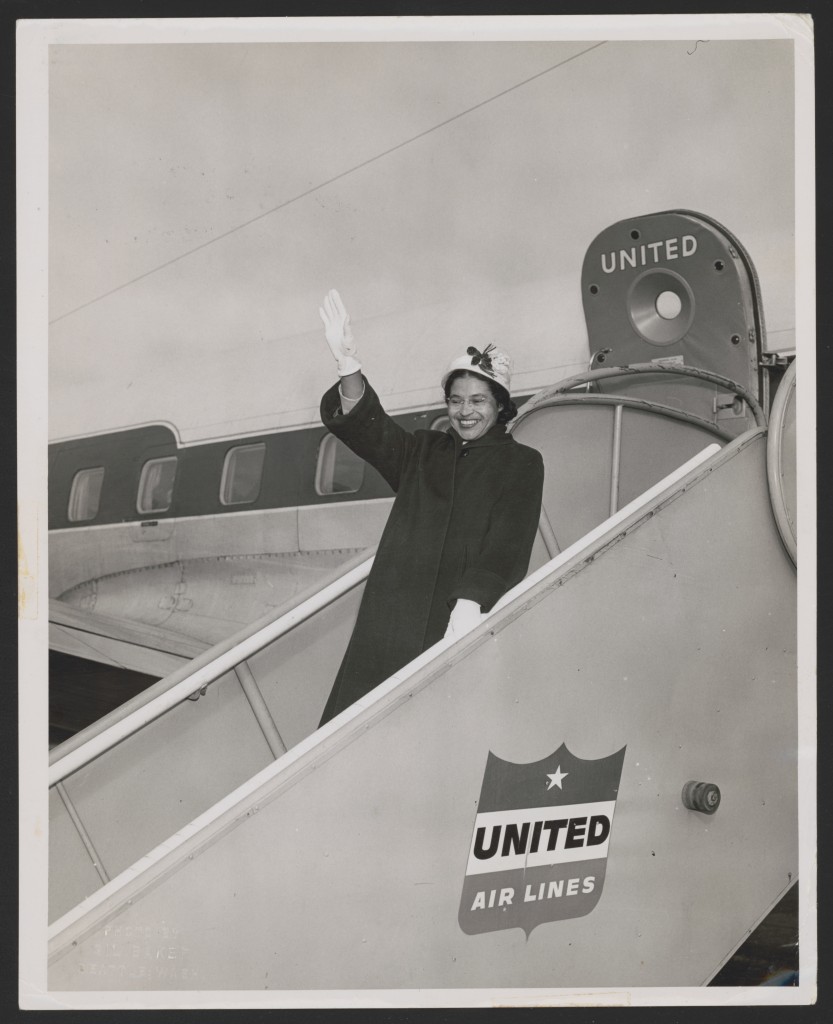 Rosa Parks waving from a United Air Lines jetway in Seattle, 1956. Photo by Gil Baker, courtesy of the Library of Congress

While many more of Parks’ personal belongings, including clothes and furniture, are still with the Howard G. Buffett Foundation, thousands of Parks’ paper artifacts will be available by appointment to anyone with a reader registration card, which is available to those over 16. A sample will be available without a card at the Jefferson Building from March 2-30 and more items can be viewed in the library’s civil rights exhibit from March 7 to Sept. 12.

After looking at the collection, Parks’ longtime friend Elaine Steele, who co-founded the Rosa & Raymond Parks Institute for Self-Improvement, hopes that people will see the woman she knew.

“Mrs. Parks was a soft-spoken person, but it didn’t mean she wasn’t brilliant,” Steele told the PBS NewsHour. “You’ll be able to see from her personal writings that she was a deep thinker.” In addition, Parks had something that Steele says is “unique to us today”: excellent penmanship. 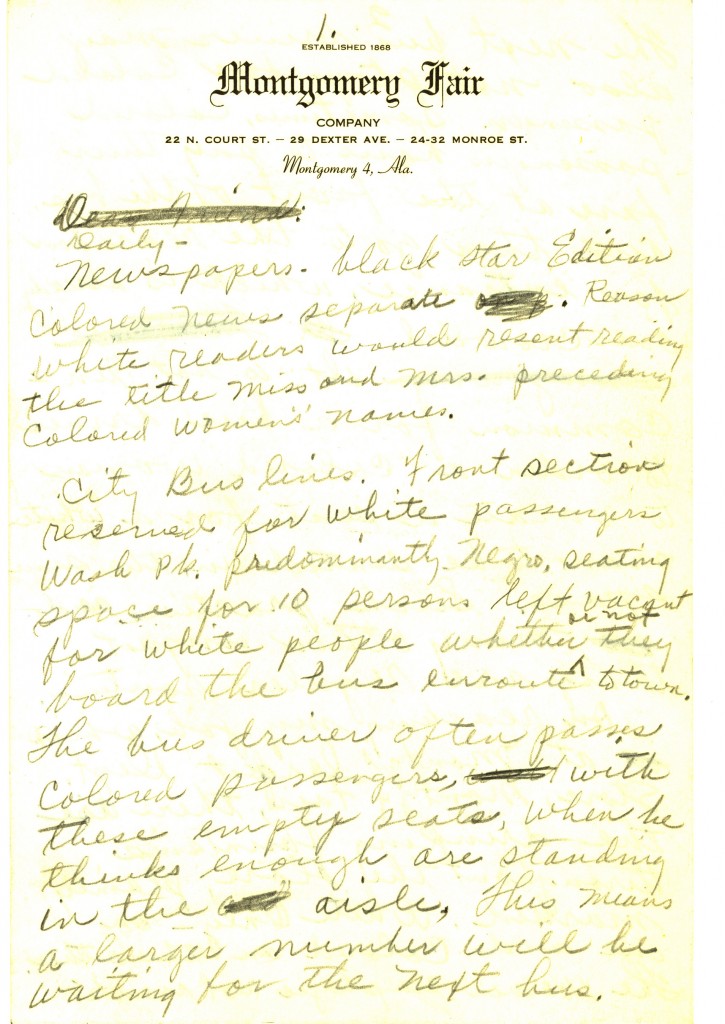 Draft letter written by Parks in January 1956, describing racial segregation in Montgomery, Alabama. Written on Montgomery Fair department store stationery. Parks was let go from her job as an assistant tailor at the store that month. Photo courtesy of Library of Congress

Eric Krupke contributed to this report.