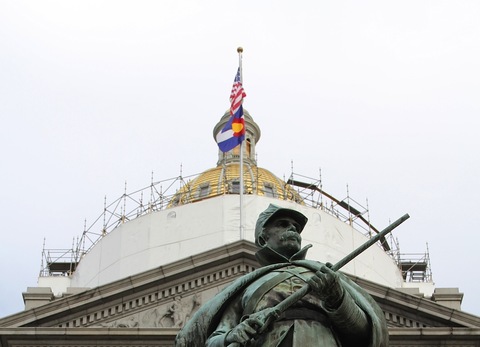 DENVER — The nation’s newest state, if rural Colorado residents had their way, would be about the size of Vermont but with the population of a small town spread across miles of farmland. There wouldn’t be civil unions for gay couples, new renewable energy standards, or limits on ammunition magazines.

After all, those were some of the reasons five counties on the state’s Eastern Plains voted on Election Day to approve the creation of a 51st state in the first place.

Secession supporters know the votes were symbolic, designed to grab the attention of a Democratic-controlled Legislature. They say the vote results emphasize a growing frustration in conservative prairie towns with the more populous and liberal urban Front Range, which has helped solidify the Democrats’ power.

“We can’t outvote the metropolitan areas anymore, and the rural areas don’t have a voice anymore,” said Perk Odell, 80, a lifelong resident of Akron in Washington County, which voted to secede.

The five counties share borders, covering about 9,500 square miles and have a combined population of about 29,200. Four of the counties — Philips, Yuma, Kit Carson and Cheyenne — border Kansas. They are solidly Republican areas that have long identified more with Kansas and Nebraska because of their agricultural background than with Denver.

Towns like Akron, population 1,700, were founded in the 1880s along railroads and thrived as agriculture producers, booming in the 1900s during grain shortages. They began a decline in 1920s that continued through the Dust Bowl and their populations have decreased or remained stagnant since then.

What remains are tight-knit communities where grain silos are sometimes the tallest structures around.

Other parts of the state, meanwhile, have grown. More than 80 percent of Colorado’s 5 million residents live on the Front Range. The counties that voted to secede currently only have two state representatives and one state senator.

In some ways, the feelings of being ignored date to the days of Colorado’s gold rush, when miners flocked to the Front Range, said Dr. Tom Noel, a history professor at the University of Colorado at Denver.

“Ever since the gold rush, those areas have been places that people rush over, and I think that’s still how people feel — like people are just whizzing past them at 80 miles an hour,” Noel said.

But for the cluster of rural counties to become a new state, Colorado lawmakers would have to sign off, followed by Congress — a scenario that even supporters of the plan say is highly unlikely.

Long shot though it may be, supporters of the 51st state movement say they believe they’ve succeeded in getting their message across that lawmakers at the state’s Capitol aren’t listening to their concerns.

One of the concerns that weren’t heard was about a proposal mandating that Colorado’s rural cooperative electric associations get 20 percent of their energy from renewable sources by 2020, up from 10 percent. The bill was approved by Democrats without GOP support.

“We understand that some rural areas still feel underrepresented and are not being heard,” he said. “We remain committed to listening more and working with local communities all across Colorado.”

Republicans next year are planning to propose making state Senate seats be apportioned by land mass instead of population to grant a bigger voice to the sparsely populated areas. Republicans hold 28 of the 65 seats in the House and 17 of 35 seats in the Senate.

Not everyone’s behind the concept of secession. Six other counties that had the measure on the ballot rejected it, including Weld County, where elected officials first raised the question.

Akron resident Charles Johnson, 69, said there were many unanswered questions about how secession would work, like what the state would be called, where the capitol would be and how schools would be funded. He also didn’t like the message a secession vote would send.

“The sad thing is it makes us all just look like whiners out here,” said Johnson, a retired teacher and former superintendent. On a recent trip to Texas to visit family, he said it was a few minutes before relatives started questioning him about the secession movement.

“I’m saddened that people, maybe, see us in a lesser light,” Johnson said.

Kim Weninger, 55, doesn’t see it that way. “I do think that we do have to send a message to the Front Range that you aren’t the only people in the state,” she said.

New restrictions on firearms, including banning magazines that hold more than 15 rounds, was among the slew of legislation that only highlighted an urban versus rural divide, she said.

“I have people tell me all the time that I have no reason to have a gun. Well, you know what? We have rattlesnakes in our yards. We have coyotes that get a hold of our cats. I need a weapon to protect animals, to protect myself. But somebody in Boulder is not going to understand that,” she said.

Correction: The photo caption in this story was corrected to identify Colorado’s state capitol as Denver.