How safe are bounce houses for kids, really?

Lily Creech never imagined that an inflatable bounce house could lead to so much suffering for her 11-year-old daughter.

It was her company picnic in Miami. Barbecue smoke hung in the air. Kids were rough-housing on a bouncer with a giant, two-story slide. Creech’s daughter, Nathalia Martin, climbed the steps and began to slide down. But near the top, her ankle got caught in some bunched-up material. Her left distal tibia and fibula snapped.

MORE from the NewsHour: What do the new WHO red meat guidelines mean?

“When her ankle broke, she started screaming, and there were still kids coming down,” Creech said. “She turned white, and she was sweating.”

Hospital staff later identified the break as a trimalleolar fracture that would require three surgeries. It was her daughter’s first trip to the hospital.

“When I saw the X-ray and saw how shattered her ankle was, I had to hold myself together,” Creech said. “ because if she saw me crying, she would know it was something really bad.”

Creech’s daughter, who is still recovering from the accident, is not alone. Government data shows that injuries involving inflatable amusements have increased in recent years.

According to emergency room data, the Consumer Product Safety Commission reported more than 18,800 injuries in 2012 as a result of moon bounces, bounce houses and inflatable amusements. That’s a threefold increase from six years earlier, according to the commission’s National Electronic Injury Surveillance System. In 2013, that number dipped slightly. It’s unclear, according to the report, whether the increase is due to increased exposure or a rise in the injury rate. 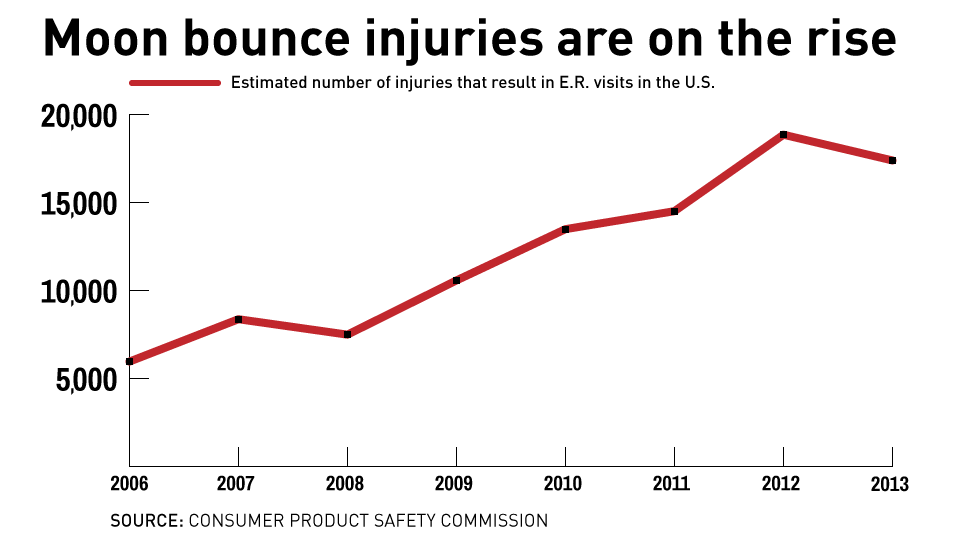 More than 90 percent of inflatable amusement injuries were linked to moon bounces, the report found. Of those injuries, two-thirds involved people’s arms and legs. Another 15 percent of injuries affected the head or face. Nearly nine out of 10 people injured were 14 years old or younger.

Bounce houses pose a variety of risks. This summer in New Zealand, a boy vanished beneath a bounce house and became ensnared by its matting. The boy’s father, who saved him, said he couldn’t hear his son scream from inside, Yahoo! News reported. He posted this video to Facebook, with the words: “If I wasnt [sic] there watching him know one [sic] would have known he was in there. We hate to think what could have happened.”

At a fall festival in 2013, when a generator that pumped air into a bounce house stopped working, and the house rapidly deflated, leaving two small boys and a 26-pound 2-year-old trapped under the heavy weight of rubber and vinyl, according to this ABC News report. In May 2014, in South Glens Falls, New York, wind lifted a bounce house 100 feet into the air and injured two boys after they fell nearly 20 feet onto a parked car and asphalt. A year later, a tornado lifted another bounce house with three children inside more than 50 feet over a beach in Fort Lauderdale, Florida. And in June, a girl in China died after she fell from a bouncy castle that was blown into the air. Manufacturer guidelines say that people should anchor inflatables and stop playing in them if inclement weather arises.

Despite these accidents, most injuries occur inside the bounce house — often from falling inside the bouncer and fracturing an arm or leg or crashing into another child, according to a study in the journal Pediatrics in 2012.

Commercial moon bounces and bounce houses have been popular at fairs and fall festivals for decades, but it wasn’t until 2004 that ASTM International, an organization that establishes standards for a wide range of products, developed safety standards for them, says Len Morrissey, one of the group’s directors for standards development. A few years later, at-home inflatables got their own set of standards, he said.

The federal government does not regulate inflatables, like the moon bounce, and states and local jurisdictions drive what rules do exist. Even guidelines from Morrissey’s group are voluntary, he said.

MORE from the NewsHour: Here’s what happened when I tried to paint like Bob Ross

Anyone can request new or revised standards, and the 850-member group votes twice a year on how to update guidelines for amusements, such as inflatables, ziplines and rollercoasters. Voting members include engineers, pediatric doctors and representatives from Disney and Universal Studios.

Frank Scurlock is a member of that group, and he thinks that inflatables have gotten a “bum rap.” Scurlock’s father, John T. Scurlock, invented the moon bounce in the 1960s, but it was his mother who had the business instinct to rent out the inflatable tent for parties. Scurlock said that when he was growing up, he and his friends played on the inflatables, helping his father, an employee with NASA, finetune the toy.

Now, he manages the family business of renting out moon bounce and bounce house inflatables in Kenner, Louisiana, and gives safety tips about how to better use these toys.

“It’s not necessarily that they’re dangerous,” Scurlock said. “Anybody can misuse anything.”

He suspects that non-commercial use could be partly responsible for rising injuries. Bouncers are now cheaply made and sold at prices competitive even with rental rates, Scurlock said. (According to the federal report, nearly half of all injuries occur with commercial inflatables.)

“The main thing is supervision,” said Florida injury attorney Eric Falk. “These rides are fun, and if they are supervised properly, they’re safe. Human error is the biggest issue.”

Of course, risks aren’t all bad. In fact, it’s important for children to take some risks in play so they know how to manage risks in life, says Roger Hart, who studies child development and playground design at the Children’s Environments Research Group at the City University of New York.

But after watching his own 3-year-old son play on a moon bounce at a birthday party, Hart said he thinks manufacturers need to do more to make these inflatables safer. For example, he said, a requirement that huge safety labels be placed outside the bounce house entrance .

“It’s not comfortable for parents to be hovering over children,” he said. “The parent’s job is to assess whether there’s an excessive risk, and that’s where they need the help of the manufacturer. They need to know that there have been injuries on this thing.”

Creech said she’s not worried about her daughter running into any more problems with moon bounces.

“I can tell you she won’t ever go on a bounce house ever again,” she said.