How schools’ delayed start in Ferguson is affecting kids

UDPATED at 10:30 a.m. EDT on Aug. 19: School was supposed to start last Thursday for the kids of Ferguson, Missouri.

The school district includes more than 11,000 students, from pre-school to high school. Under USDA’s community eligibility program, the district is able to provide free breakfast and lunch for all students. Over the summer, meal programs were set up to continue providing nourishment to students. But summer break has ended, and without school, those who rely on this meal plan must find another way to eat.

Jana Shortt, director of communications for the Ferguson-Florrisant School District, said that individual Ferguson residents and community organizers, like Reverend Willis Johnson and the Wellspring Church, have taken it upon themselves to provide students with lunch in the wake of the school closures. 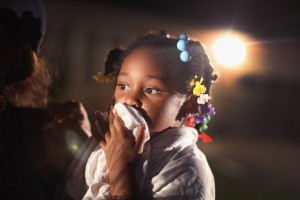 Johnson said his church has offered “educational respite” for students around town, and has given residents a place to pray and talk. It is his hope to put a plan in motion that over time will help “rebuild our community.”

The needs of the city’s youngest residents have struck a chord with people, even outside of Ferguson. Julianna Mendelsohn, an elementary school teacher at Mangum Elementary School in Durham, North Carolina, started a money-raising campaign on Fundly.com to collect monetary donations for the St. Louis Food Bank to buy food for Ferguson students. It began as something she thought only her friends and family would contribute to, with the intention of raising a couple thousand dollars at most.

“Then Twitter happened,” said Mendelsohn in a phone interview.

Aside from students’ most basic needs, Shortt says the school district is concerned about addressing potential emotional and social problems that may arise from the events in Ferguson.

All Ferguson-Florrisant public schools have counselors on staff. But to ensure that all students will get necessary mental help following the riots in Ferguson, Shortt said they’ve “reached out to outside groups that are providing therapists” from St. Louis’s Great Circle Community Agency.

Left: The start of school in Ferguson, Missouri has been delayed by three days. Photo by Scott Olson/Getty Images.