Sue Sisley, a primary care physician in Scottsdale, Arizona, recalls the moment she picked up the carefully wrapped package fresh from the delivery truck. Nearly two years after Sisley and her colleagues were awarded a grant to study marijuana as a treatment for 76 military veterans suffering from chronic post-traumatic stress disorder, her shipment of the drug was finally in hand.

But minutes later, as she opened the packets to weigh the drug – as required by the federal Drug Enforcement Administration – her enthusiasm turned to dismay. It didn’t look like marijuana. Most of it looked like green talcum powder.

“It didn’t resemble cannabis. It didn’t smell like cannabis,” Sisley says. What’s more, laboratory testing found that some of the samples were contaminated with mold, while others didn’t match the chemical potency Sisley had requested for the study.

There’s only one source of marijuana for clinical research in the United States. And “they weren’t able to produce what we were asking for,” Sisley says.

It’s unclear whether mold, lead or discrepancies in potency has been a problem in prior cannabis studies, because until now, it appears that no one looked.

In January — four months and three rounds of testing after that first delivery — Sisley and researchers working with the Multidisciplinary Association for Psychedelic Studies (MAPS) were finally able to enroll their first subjects. But the delay and the reasons behind it have raised questions about the reliability of the facility responsible for supplying marijuana to every clinical study in the country.

The marijuana came from a 12-acre farm at the University of Mississippi, run by the National Institute on Drug Abuse (NIDA). Since 1968, it has been the only facility licensed by the DEA to produce the plant for clinical research. While eight states and the District of Columbia have legalized marijuana — and all but a handful allow at least some medical cannabis — growing the plant in large quantities remains forbidden under federal law. For all practical purposes, that means that any medical study that wants to use marijuana on human subjects must go through the University of Mississippi.

Rick Doblin, MAPS’ director, says this recent episode “shows that NIDA is completely inadequate as a source of marijuana for drug development research.”

“They’re in no way capable of assuming the rights and responsibilities for handling a drug that we’re hoping to be approved by the FDA as prescription medicine,” he says.

The demand for the facility’s product has surged in the past year, mirroring interest from medical researchers. Through mid-October 2016, the agency says it had fulfilled 39 requests for marijuana, from 10 different researchers. That’s a jump from the 23 requests it filled in 2015, the most recent numbers available, according to an April letter from the DEA to Sen. Elizabeth Warren (D-Mass).

A video from the University of Mississippi shows its cannabis garden.

It’s unclear whether mold, lead or discrepancies in potency has been a problem in prior cannabis studies, because until now, it appears that no one looked.

NIDA says this is the first time researchers have expressed concern about mold or potency testing. Neither the agency nor the University of Mississippi tests samples for mold before they’re shipped.

Sisley says researchers have taken too much for granted. “There’s no telling how many subjects in past studies were exposed,” she says.

The uncertainty highlights a broader challenge in the growing field of cannabis research: there’s little consensus on what testing is appropriate or on what findings constitute a hazard.

The uncertainty highlights a broader challenge in the growing field of cannabis research: there’s little consensus on what testing is appropriate or on what findings constitute a hazard. Scientists and officials say they would love to have more guidance.

“Our biggest concern is patient safety,” says Mike Van Dyke, chief of toxicology with the Colorado Department of Public Health and Environment, which is funding the MAPS-sponsored study on PTSD. “The lack of a federal regulatory structure makes it a huge challenge. We don’t have all the information we’d like to have.” 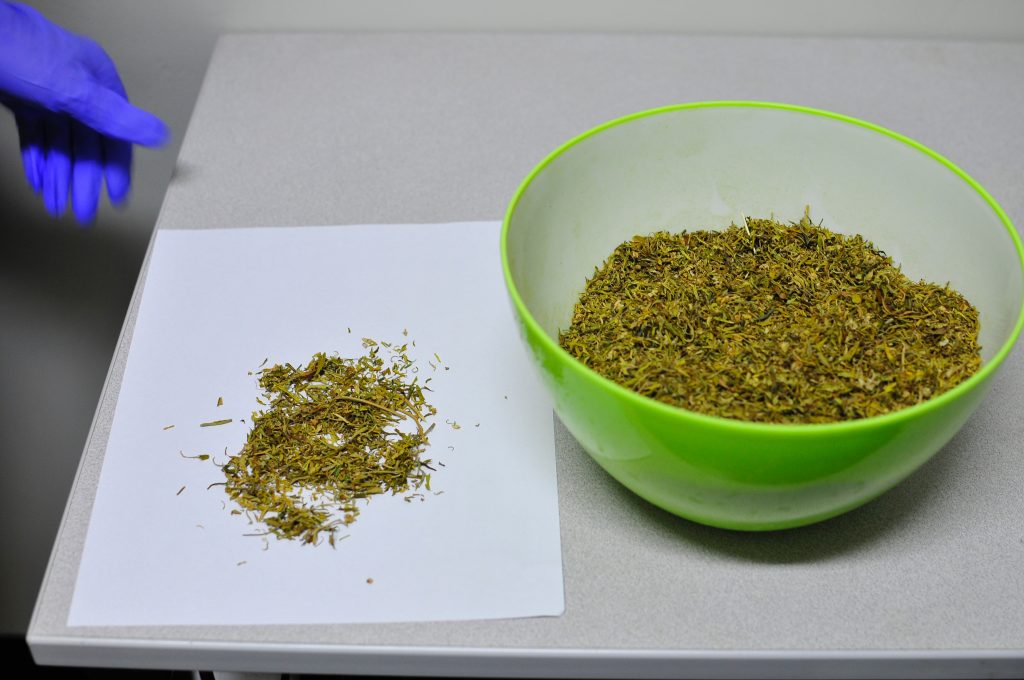 A researcher in Dr. Sue Sisley’s lab prepares to weigh a sample of marijuana received from the federal facility responsible for growing marijuana for clinical research. Photo courtesy of MAPS.

As part of the original study protocol, the marijuana that Sisley received was tested at an independent laboratory in Colorado, which found a high level of total yeast and mold (TYM) in several samples. The tests also found that the potency of some samples didn’t match what study organizers had ordered, or what it says on the certificate of analysis from the federal supplier.

One sample, billed as having a 13 percent level of THC — the main psychoactive compound in marijuana — had just 8 percent when tested at the independent facility in Colorado. Other samples were off by lesser amounts. Subsequent testing at the University of Illinois-Chicago confirmed the presence of total yeast and mold.

The Chicago tests also found all four samples contained trace amounts of lead, though well below the levels generally considered to be hazardous, at least for adults.

On the state level, testing requirements for recreational and medical marijuana vary widely. Most states require some testing for heavy metals such as lead, but not for pesticide residue. Yeast and mold testing is required in most states where cannabis is sold legally. The failure rate – frequently defined as a total mold and yeast count higher than 10,000 “colony-forming units” per gram (CFU/g) — is not officially tracked in Colorado. But state records show that approximately 7 percent of samples tested last year did not pass “microbial” standards, a category that includes bacterial contamination as well as TYM. Colorado only requires microbial testing for marijuana sold on the recreational market, not for medicinal use.

NIDA says it suspects the mold problem was introduced on the receiving end, when the Colorado lab accidentally left samples in a refrigerator for two days, instead of keeping them frozen at -10 to -25 degrees Celsius, as called for by handling instructions.

Nevertheless, Sisley and the team ultimately concluded after months of research that it was safe to proceed with the study. They began in January. In an internal memo that outlines their reasons for moving forward, they wrote that there’s no agreement on whether tests for TYM should be required, and no guidance from NIDA or the FDA.

One reason for that is a high TYM count does not always constitute a health risk, says Kevin McKernan, an entrepreneur and geneticist who is looking to improve the quality of testing in the realm of cannabis research. Certain types of fungus, notably a group of species known as aspergillus, can cause a variety of health problems when smoked, especially in people with compromised immune systems. But, many other mold varieties are considered harmless, McKernan says. Testing found the samples in question were not a harmful variety.

NIDA says its own tests show THC levels closer to what was expected – in the 10 to 12 percent range, instead of the 8 percent that MAPS found. It says it’s reviewing MAPS’ results and protocols to try to understand the discrepancy. NIDA also says it tested for heavy metals before shipping the material, and found nothing above acceptable levels. 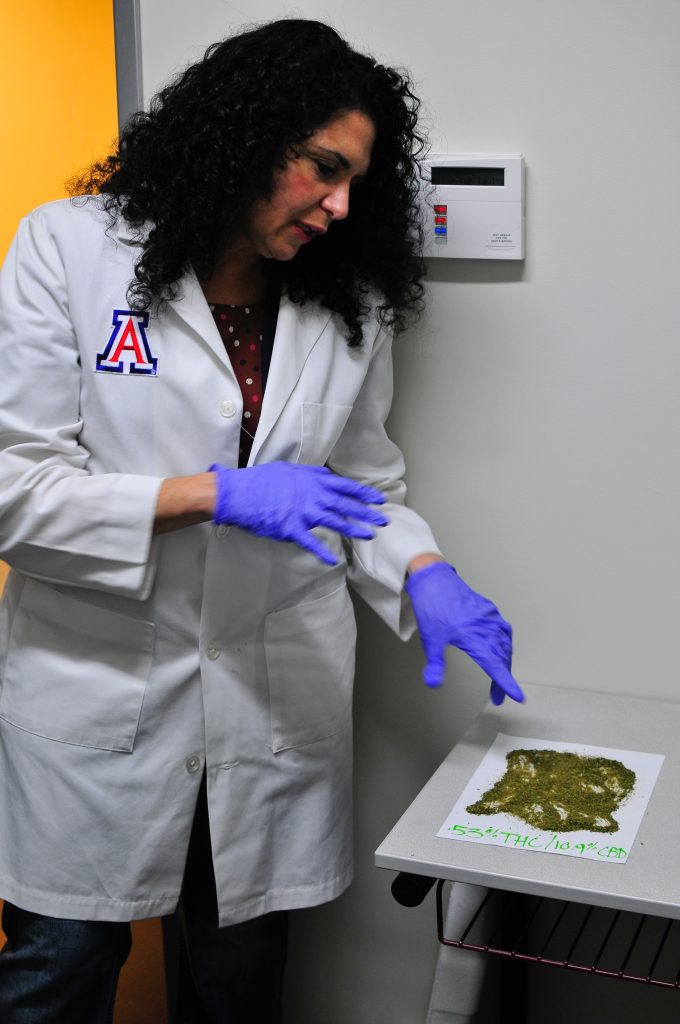 Dr. Sue Sisley points to marijuana samples she received as part of a study that’s testing whether marijuana can have a positive effect on veterans with PTSD. Photo courtesy of MAPS.

NIDA is also taking some steps to tighten oversight. In January, it announced a grant to McKernan’s two Massachusetts-based companies, Medicinal Genomics and Courtagen, to develop a DNA-based test that would identify specific types of harmful mold and bacteria in marijuana.

Beyond quality control issues, some critics say the Mississippi farm doesn’t provide researchers with enough options. For example, the potency of marijuana in NIDA’s collection tops out at 13 percent THC. That’s less than half the level in the most potent strains sold in states where the drug is legal and regularly tested.

That means “if you’re trying to do a study where you imitate what patients do in the real world, you can’t,” Sisley says.

“If you’re trying to do a study where you imitate what patients do in the real world, you can’t.” – Dr. Sue Sisley

Van Dyke echoes her concern. “It’s an important issue. The products in Colorado are different from the products produced by NIDA, and there’s untapped demand to study those products that people are really using.”

In an email to NewsHour, the agency says it’s growing new material that will likely contain higher THC levels. NIDA officials insist they’re keeping up with demand, and in 2014, increased its production and diversified the strains of marijuana it grows.

Another criticism stems from NIDA’s practice of achieving higher THC concentrations by mixing different strains together, rather than growing new plants.

In its April 2016 letter, the agency told Warren the Mississippi facility has “approximately 185” batches of cannabis, at varying concentrations of THC and CBD. Different varieties, the letter says, “may be blended to achieve specific cannabinoid concentrations of interest to researchers.”

Critics, including Sisley, say that mixing strains is a lost opportunity. Every cannabis plant contains several hundred unique compounds, which some believe may significantly alter the drug’s effects. If different plants are mixed together, scientists have a harder time tracking those effects.

Many scientists were heartened this summer when the Drug Enforcement Agency (DEA) announced that it would license additional bulk growers, ending NIDA’s monopoly.

According to the DEA, 16 organizations have submitted the paperwork to launch the application process, which comes with a $3,047 fee. None of those applications have been approved, however, and the agency says there is no set timeline to take action.

The delays in Sisley’s study are energizing those who say the federal government needs to speed things up.

Frustrated by her experience, Sisley is hoping to take a more hands-on approach. One of the DEA applicants is the Scottsdale Research Institute (SRI), where she is the principal investigator. SRI has submitted a proposal to grow cannabis from tissue culture rather than seedlings, a more sterile method of producing the plant.

She doesn’t mince words about the setback.

“We waited 20 months to get going, and then we got this sub-optimal study drug,” she says. “The longer we allow this monopoly to continue, the more efficacy [of the] research will continue to be thwarted.”

Left: A researcher in Dr. Sue Sisley’s lab pours out a sample of marijuana produced by the federal facility responsible for growing cannabis for clinical research. When she received marijuana for a PTSD trial last year, Sisley says the packages contained mold and weren’t as potent as she requested. Photo courtesy of MAPS.