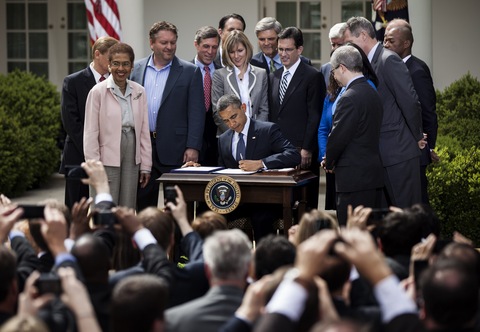 Small businesses and start-up companies are one step closer to having the ability to raise investment capital over the internet.

The Securities and Exchange Commission (SEC) issued proposed rules today to implement a provision to the 2012 Jumpstart Our Business Startups – or JOBS Act – that allows companies to use online ‘crowdfunding’ to raise up to $1 million annually from the general public. Crowdfunding is the practice of raising a large pool of money from many small contributions.

Crowdfunding websites like Kickstarter and IndieGoGo already allow people to donate to a project, but the JOBS Act now allows anyone to buy a stake in a company. The law implements a change in how private companies can raise money and changes securities laws that date back to the Great Depression.
Under current law, private companies are only able to raise money from “accredited” investors, which by SEC definition is individual must earn at least $200,000 per year or be worth at least $1 million.

The JOBS Act mandate that crowdfunding investments happen through ‘funding portals’ – online platforms that will be regulated by the SEC and the Financial Industry Regulatory Authority (FINRA). Under the new law, companies will have to make different levels of disclosures to investors depending on how much money they want to raise. Companies wishing to raise more than $500,000 will have to disclose audited financials.

Supporters of the crowdfunding provision have argued that loosening the rules around start-up fundraising will spur entrepreneurship, job creation, and economic growth.

“I think it’s going to unleash another wave of entrepreneurship all across the nation,” said Steve Case, co-founder of AOL, in an interview for a segment on crowdfunding airing Sunday on PBS NewsHour Weekend. “We need to really make sure we’re doubling down on our nation’s entrepreneurs, and the JOBS Act will help do that by providing more entrepreneurs in more places in more sectors of our economy the ability to raise the capital either to get started or to grow their company.”

However, critics have pointed out that the JOBS Act loosens laws designed to protect regular investors from risky start-up businesses that often fail. And that start-ups resorting to crowdfunding will be the riskiest of risky companies because they were unable to raise funds from traditional big investors like venture capitalists.

The public will now have 90 days to comment on rules.