The secret to improving health and productivity at work

If you’re reading this at work, stand up. Move your feet. Pace around your cubicle before you consume one paragraph more. Seriously.

Why? Taking a turn around the office will help clear your mind — perhaps even more than this post will — so you can get back to that project you’re stalling on with renewed vigor.

Moving in the office, between stints glued to the computer, is good for us — that’s obvious. More and more companies are beginning to realize that encouraging physical activity is good for their insurance premiums too. But an economist hypothesized that walking while working would also be good for the work itself — boosting both quality and quantity.

A St. Paul student loan company was willing to test this out by participating in a year-long study, led by a good friend of Making Sen$e, University of Minnesota professor Avner Ben-Ner. The company purchased treadmill desks for 40 of their 400 employees who volunteered to participate.

What would happen to their work done while walking?

Previous research about the connection between physical activity and productivity had been inconclusive. Ben-Ner’s longitudinal study hoped to get a more definitive answer.

Initial results weren’t very persuasive. At no point was there a net loss in performance, but the gain of working on the treadmill varied. (Employees and their supervisors rated their work performance in weekly surveys.) After an initial bump associated with receiving the treadmill, gains started to decline.

Ben-Ner guesses that the slump represented an adjustment period — employees learning how to hold their wrists to type standing up or how to hold a gaze to read while moving. And sure enough, once they’d gained experience working on the treadmill, employees stepped up their performance once again. 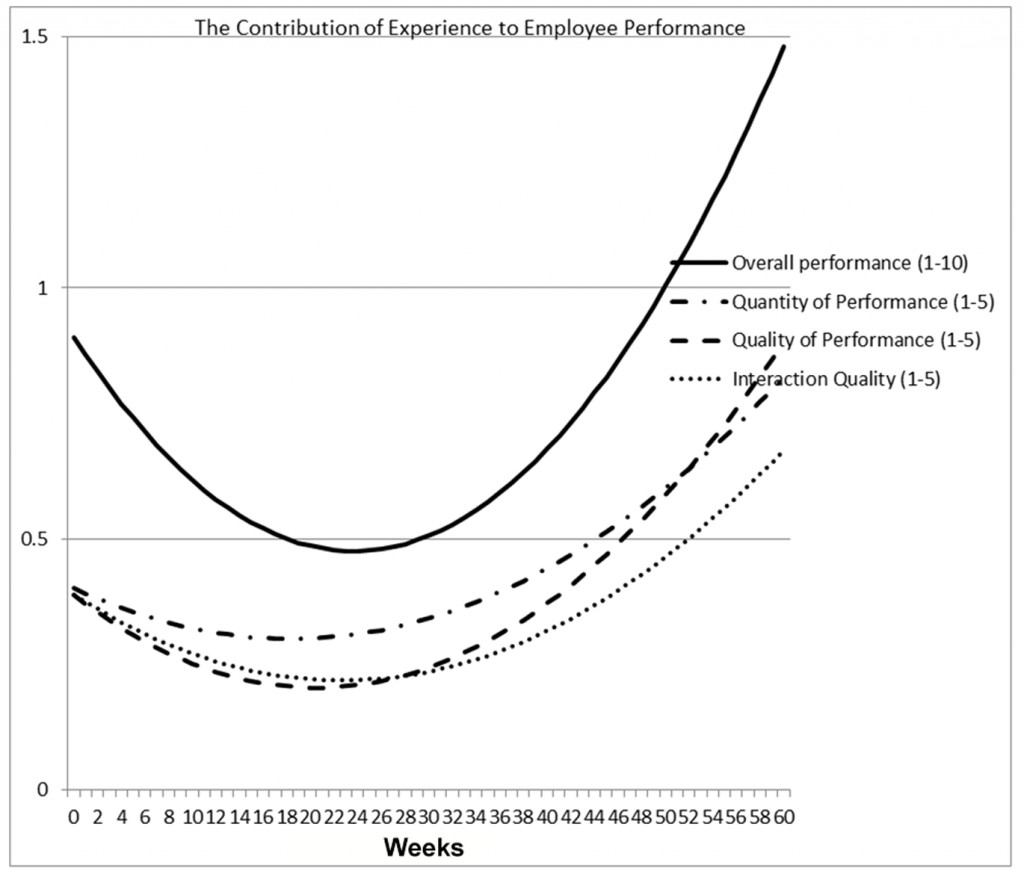 “The Contribution of Experience to Employee Performance” — or the treadmill workstation learning curve — shows how workers perform work on treadmills once they adapt to using them.

And it’s not just work performance that increased: walking while working also had a positive effect on overall physical activity. Workers who used treadmill workstations expended about 74 more calories a day, the result of about an hour less of sedentary downtime and increase in light and active walking.

Too good to be true? One potential concern about installing treadmill workstations was that they’d be an excuse for the habitually inactive to be even less active outside of work. But that wasn’t the case. Taking physical measurements with an accelerometer, researchers found an overall positive effect on physical activity, both during and after work. On average, Ben-Ner says, participants expended 63 more calories from 7 a.m. to 5 p.m. and 21 more calories from 5 to 11 p.m.

That there was an increase in caloric expenditure during office hours is significant, he stresses. Despite employer-issued incentives for hitting the gym and public services (think bike lanes) that make it easier for us to bookend our work days with physical activity, many of us are still couch potatoes.

And that’s because, Ben-Ner and his co-authors explain, physical activity is not free. Echoing Ben Franklin’s famous observation that time is money, there’s a time cost involved — what economists call an “opportunity cost” — and so “for most people,” they write, “it [physical activity] is a source of direct disutility.”

But then how about working out, however mildly, during the work day, given the association between sedentariness and general lack of physical activity? This kind of workplace intervention is an effective way of targeting general indolence, says Ben-Ner.

In fact, he hypothesizes that treadmill workstations are most effective for more inactive people — people with higher real or perceived costs of physical activity. And in part, based on his own experience — he has three standing desks and a detached treadmill — Ben-Ner thinks that complex cognitive activity, like thinking through a problem, is best suited for physical activity.

Anyone who’s ever pounded the pavement to sweat out anxiety or weigh a difficult decision understands that logic. But are the kind of performance gains seen at this one Minnesota office necessarily indicative of a larger truth? There may be other mechanisms at play.

Recall that the “walking workers” — 10 percent of the company’s staff — volunteered to participate. This self-selecting population didn’t differ from the rest of the office in any statistically significant way except that they were more likely to perceive themselves as overweight (even though their body mass indexes weren’t any higher). They might simply have been working harder and walking more to justify their participation in the study.

It’s possible they were more motivated, Ben-Ner concedes, but is it likely that what worked for them wouldn’t work for the other 90 percent of the company? No, he says, probably not.

Recall also that the company paid for the treadmills and the installation of the workstations. So it’s reasonable to assume that at least some of employees’ increased productivity stemmed not from walking but from a motivation to reciprocate their employer’s investment. This is the “efficiency wage” hypothesis: better compensated employees (in this case, with a treadmill) will be better workers.

That’s not out of the question, says Ben-Ner, but the fact that there’s such a significant learning curve for working on the treadmill suggests that the efficiency wage theory isn’t the main story. An efficiency wage, he said, while it might have boosted productivity, wouldn’t have had the time profile seen in the learning curve — productivity would have dropped after a while, not dropped and then increased.

But it’s not just about workplaces for Ben-Ner. When his six-year-old daughter asks him to fetch something from her room, he asks, why not do it yourself? It isn’t that he wouldn’t gladly fetch it; he wants her to see that the benefits of physical activity are not so distant and the present costs are not so burdensome. As a society, Ben-Ner says, we’re myopic: we let the thought of heaving ourselves off the couch deter us from getting what we need.

We need exercise. Endless scientific research shows that movement helps humans lead healthier, longer and happier lives. If we’re not sick and in a better mood, chances are that we’ll be better workers too.

“We have more agency than our restrictive workplaces offer,” Ben-Ner says. “But we just have to be convinced of that.” His study seems a stride in the right direction.

Left: Exercising presents a significant time cost for many Americans. But what happens to your productivity when you do your workout while you work? Photo by Megan Maloy/Photodisc/Getty Images.